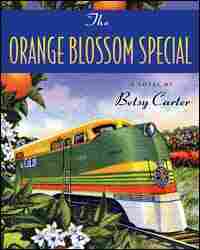 In her annual search for books to discover during summer's lazy days, Susan Stamberg chats with three independent booksellers about their picks.

Rona Brinlee of The Book Mark in Atlantic Beach, Fla., offers a selection that includes a book about the beach (and for the beach, too -- it's waterproof); a nonfiction account of the relationship between Andrew Carnegie and Henry Clay Frick; and a tale of revenge from historical novelist Iain Pears that has an "amazing sense of doom."

David Sedaris' popular essay collection Dress Your Family in Corduroy and Denim is the first pick from The Alabama Booksmith's Jake Reis. The other titles on Reis' list are all set, appropriately enough for this Birmingham-based bookseller, in the South. And one title comes with a love story attached: Reis says the store promoted The Same Sweet Girls author Cassandra King so well to fellow author Pat Conroy that the two later married.

The author Ander Monson gets a double appreciation from Portrait of a Bookstore's Lucia Silva. The Studio City, Calif., bookseller chooses two titles from Michigan-based writer and editor Monson, one book of interconnected short stories and one poetry volume. Additionally, she chooses fiction titles from Ann Cummins, Jonathan Safran Foer and Joan Didion, whose Play It as It Lays Silva re-reads each summer.

Also: Play It as It Lays by Joan Didion (Excerpt unavailable)