Accessibility links
'Shadow in the City,' a Look at the Drug Wars Writer Charles Bowden's new book A Shadow in the City tells the story of an undercover cop who spent 23 years on the front lines of America's drug war. That mission takes its toll on the protagonist, who sees drugs ruin lives — those of users and dealers-- and loses faith in the fight. Alex Chadwick talks to Bowden about the book.

Listen
'Shadow in the City,' a Look at the Drug Wars

Writer Charles Bowden's new book A Shadow in the City tells the story of an undercover cop who spent 23 years on the front lines of America's drug war. That mission takes its toll on the protagonist, who sees drugs ruin lives — those of users and dealers— and loses faith in the fight. Alex Chadwick talks to Bowden about the book.

Back now with DAY TO DAY. I'm Alex Chadwick.

Beginning a series of conversations about a cop who spent more than 20 years under cover and whose re-examined life finally led him to question almost everything he had done and become.

CHADWICK: That is writer Charles Bowden. This story is told fully in his new book "A Shadow in the City," published tomorrow. He earlier wrote "Down by the River," an acclaimed account of the illegal drug trade across our border with Mexico. This new work is more narrowly focused on the life of a single narcotics investigator whose undercover name was Joey O'Shay in a city that Chuck Bowden does not name.

Mr. BOWDEN: He drifted into police work as just a beat cop and discovers drugs and invents this role for himself. And I think he's, you know, brilliant at it. He's a natural actor, a natural athlete. And most people can't do it. Most of Joey O'Shay's partners couldn't last. They just burned out--not 'cause there was something wrong with them or they were wimps, but because most people can't stand living this way. He could.

CHADWICK: Starting in the early '80s, he spent three years infiltrating a motorcycle gang dealing methamphetamines. He was calm, patient, so good that eventually the city force he worked for lent him to a federal drug agency for other investigations. But it began to bother Joey that many agents there didn't keep his long, dangerous hours. The only people who really did, Charles Bowden says, were the bad guys.

Mr. BOWDEN: Whatever you think of drug dealers, it's a full-time job. And if you loose a half step, you go under. You either go to prison, somebody kills you or rips you off, etc. But he actually started to feel an emotional involvement with some of these people. You know, they'd show him photos of their kids, their grandkids. He got to really know them. And so slowly, this line between himself and them disappeared.

CHADWICK: And he knew that these people, if they said they were going to do something, they'd do it; they'd keep their word.

CHADWICK: Joey O'Shay made hundreds of arrests and still managed to operate under cover. He learned the chemistry of pharmaceuticals. He learned transportation, distribution, pricing, marketing. He learned why and how the business is enormous and remains so despite everything he was doing. And years passed and decades.

Mr. BOWDEN: His problem was when he got really deep in it, he slowly stopped believing in it. As he got to know the people he destroyed, he didn't think he was any better than they were. Two, he didn't think destroying them was going to solve what people called the drug problem, that people are going to buy these substances and find them no matter what he did. And then finally, this one woman he got to know really well on the case in the book said, `Look, I have never created a single addict in my life. They existed when I was born; they're going to exist when I die. I just supply them.' And he realized you're telling him the truth.

CHADWICK: This is a woman who's going to bring in heroin from Colombia for him.

Mr. BOWDEN: Yeah, she's not just a woman who's going to bring in heroin from Colombia, she is a major international heroin broker.

CHADWICK: She's the most sympathetic character in the book.

Mr. BOWDEN: Yes, but she's also the one that our Justice Department would make the poster child of evil. And one of the points of the book is, here she is; she's a major mover of heroin and, by God, she's also a decent person.

CHADWICK: How can he have that view and be a narc?

Mr. BOWDEN: Well, it turned out he couldn't. I think--I know his doubts had begun years earlier about what he was doing. He couldn't keep doing it. I think he wound up where I wound up. The stuff has to be legalized and people have to be taught how to deal with it, that we don't want to build more prisons, that destroying people over it with courts isn't working. We don't want a nation of junkies, so what's the other choice? The same thing we did with alcohol. `Here, you can have it, but you're going to have a bad life if you're drunk all the time.' That's it.

CHADWICK: After 23 years as an undercover narcotics officer, Joey O'Shay had had enough. He's quit narcotics. With two more years to go for full retirement, he's investigating other crimes now. And as some act of penitence, he has told his story to this writer, Charles Bowden, who has agreed to keep his name private. But Joey O'Shay's story is so unusual and known to so many in his city, it does seem likely his identity will emerge.

Mr. BOWDEN: I have never been anywhere with him. I have never been in his kitchen at midnight while he gets a glass of water that he didn't have a Glock with him. To my knowledge, he's never unarmed, whether he's in his home or outside of it, and I don't think he ever will be, because he got involved in a global business, he hurt people in other countries, he caused a lot of damage to them and he can never be confident somebody isn't looking for him. He'll just have to live with that.

CHADWICK: Joey is in his mid-50s. He spends time now thinking about the rest of his life or casting back to images from an outdoors boyhood, the magic lake where he would lie in a boat very late in the deep summer darkness watching the star-spangled night sky. Twenty-five hundred years ago, Socrates already knew that the unexamined life is not worth living, but we're still unsure what to do when you do re-examine your life and discover so much to regret.

Mr. BOWDEN: He wonders about that, too. You can't live certain things without paying a price. You can't pretend it didn't happen. He'll have to live with the damage of his life. You know, he's an odd guy. He's studied the map and he's found this county out in the middle of nowhere that has the highest star count possible at night with no pollution. So he knows what he's about. That's where he wants to go; that's where he's thinking of going. And whether he does it or not, just by thinking that he knows what he needs to make him whole.

CHADWICK: Charles Bowden's story of Joey O'Shay is in the new book "A Shadow in the City: Confessions of an Undercover Drug Warrior." Tomorrow on DAY TO DAY, we travel to an undisclosed location to interview the drug warrior.

"Mr. JOEY O'SHAY": Man, working narcotics and working it with an open mind, you got a front-row seat on the greatest show on Earth. You see everything from millionaires to people that are crazy and out there, to brilliant strategists. You meet judges and prosecutors, and it's just--it's a circus and it's wild.

CHADWICK: Joey O'Shay and how to cut the odds when you risk your life, tomorrow on DAY TO DAY. 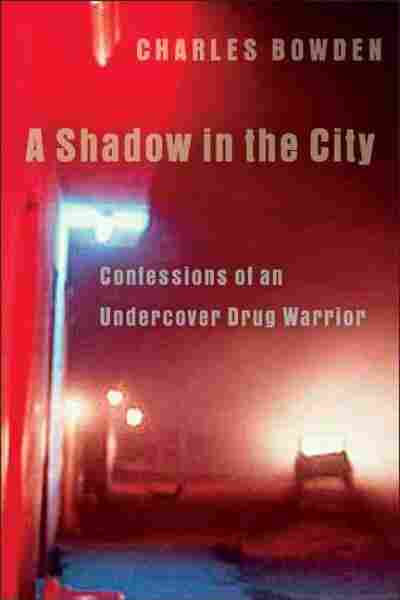 A Shadow in the City

Confessions of an Undercover Drug Warrior