Accessibility links
Issues at the 2005 G8 Summit The G8 summit is a three-day annual meeting of the world's most powerful politicians. This 2005 meeting takes place in Great Britain and focuses on both climate change and the challenges of poverty in Africa. 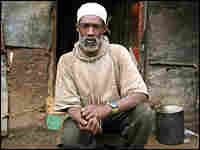 Paul Moriri outside his shack in the Korogocho slum of Nairobi. Moriri, who picks through the dump for food, is one of millions of Africans who survive on less than one dollar a day. Jason Beaubien, NPR hide caption

The poverty and instability gripping much of Africa are headline issues at this year's G8 summit. But it is the other big topic on the table, climate change, that is most likely to make news.

That's because the United States stands apart from the other nations of the G8 in its approach to global warming. All of the other G8 nations, and more than 100 countries across the globe, have signed the Kyoto Protocol on climate change. The U.S., however, does not want to be bound by the agreement's limits on emissions of greenhouse gasses.

The disagreement over global warming will be the biggest challenge for British Prime Minister Tony Blair as he tries to steer the G8 towards consensus on this and other issues.

Capsules of the key issues and at the G8 Gleneagles 2005 summit:

Topic number one for discussion and action at Gleneagles is moving the people of Africa, almost 14 percent of the world's total population, out of poverty and into an era of stability and economic growth.

According to the G8, Sub-Saharan Africa is the only region of the world to grow poorer in the last generation and is home to 28 percent of the world's people living in poverty.

In 2004, Britain's Tony launched the Commission for Africa to assess policy toward the continent. The commission will deliver its findings during the G8 summit. The report calls for calls for debt relief, fair trade and an extra $25 billion a year in international aid for the continent by 2010, and then a further $25 billion annually up to 2015.

G8 finance ministers have already agreed ahead of the Perthsire summit to write off 100 percent of the debt for 18 countries. Both Tony Blair and President Bush have also pledged to double aid flows to Africa, provided that African leaders continue to take measures to improve governance and stability.

The other major issue is global climate change, a continuing sore spot in relations between the United States and the rest of the world. Britain's Tony Blair has said that climate change is "probably, long-term the single most important issue we face as a global community."

With that belief, much of the world has signed on to the Kyoto Protocol and its target limits on the emissions of greenhouse gasses. The United States, the world's largest producer of greenhouse gases, has refused to be bound by the Kyoto agreement, which took effect in February.

Tony Blair's goal for the G8 Gleneagles summit is not to convince the U.S. to join Kyoto, but to obtain agreement on the science of global warming and on practical technological measures to combat it. He would also like to create consensus among the group's members on to face this challenge in the future.

Critics of the U.S. policy on climate change have urged the other G8 members to produce a strong statement on global warming, and to exclude the U.S. from the statement if it refuses to go along.

Several other issues are also officially on the table at the 2005 G8 summit. Fighting terrorism, curbing the proliferation of weapons of mass destruction (WMD) and promoting stability and prosperity in the Middle East and North Africa are all issues that have been acted on at past summits and will be addressed again at Gleneagles. The G8 countries have all pledged money and cooperation to address what are seen as issues of international security.