Accessibility links
Key Players at the 2005 G8 Summit British Prime Minister Tony Blair has set the agenda for this year's G8 summit. Attendees have largely lined up behind his call to help Africa emerge as a stable and growing continent. Most of the G8 also support his drive for consensus on the issue of global warming. 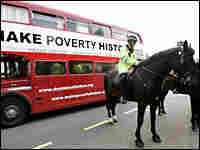 Mounted police patrol the streets of Auchterarder a day before the start of the G8 summit in Scotland. British police vowed on Tuesday to get tough with protesters bent on violence during the G8 summit. Russell Boyce/Reuters hide caption 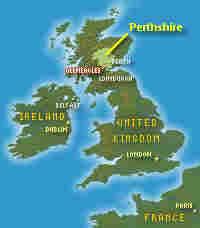 The Gleneagles Hotel is located in the rolling hills of Perthsire in Scotland. It was chosen to host the G8 summit, in part, because of its relatively isolated location. NPR hide caption 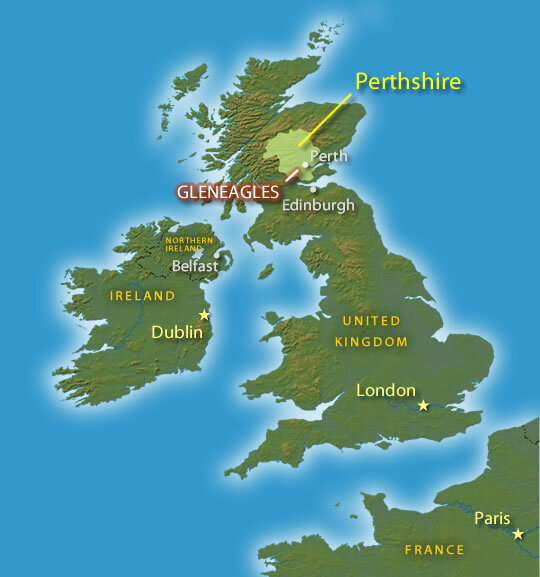 The Gleneagles Hotel is located in the rolling hills of Perthsire in Scotland. It was chosen to host the G8 summit, in part, because of its relatively isolated location.

British Prime Minister Tony Blair has set the agenda for this year's G8 summit. Attendees have largely lined up behind his call to help Africa emerge as a stable and growing continent. Most of the G8 also support his drive for consensus on the issue of global warming.

The United States, however, is the one notable exception. President George W. Bush is not expected to agree with his fellow heads-of-state on the science of, or solutions to, climate change.

The G8 summit is a three-day annual meeting of the world's most powerful politicians. The eight member countries are: Canada, the United States, France, Italy, Germany, Russia, Japan and the United Kingdom.

The U.K. holds the presidency of the G8 for 2005, making it the meeting's host. The leaders of the G8, as well as invited guests, are gathering in Perthsire, Scotland, at the Gleneagles Hotel.

Capsules of the key players at the G8 Gleneagles 2005 summit:

Prime Minister Tony Blair wants the G8 to end with a commitment to doubling support for Africa. He is also seeking to create consensus on fighting global warming through the reduction of greenhouse gasses. Blair will also be working to revive some sense of European unity in the wake of voters in Denmark and France rejecting a European constitution.

Under pressure from Blair, President George W. Bush has pledged to double U.S. support to Africa by 2010. On the climate change front, the U.S. is the only country among the G8 not to have ratified the Kyoto Protocol on greenhouse gas emissions. The U.S. is not likely to be pinned down at Gleneagles on future emissions targets.

President Jacques Chirac would like to forge an agreement on global warming at Gleneagles. Chirac has said, however, that American opposition will likely block any agreement on this issue. Global trade, exchange rates and a transparent oil market will all also be on the French president's agenda.

German Chancellor Gerhard will stand out in opposition to Blair's call for increased aid to the poor countries of Africa. The German position is that government institutions need to be strengthened on the continent before substantial increases in aid are granted.

Aides to Premier Silvio Berlusconi have said that he is supportive of Prime Minister Blair's efforts to increase assistance to Africa. But the Italians offer the caveat that the formula for providing the new money will have to be negotiated in the future.

Prime Minister Junichiro Koizumi has already pledged $5 billion in aid to Africa over the next five years. The money will go to support health care, trade and development as part of the country's goal of doubling aid to the continent in the next three years. Japan also stands firmly behind its commitment to reduce greenhouse gas emissions.

Prime Minister Paul Martin's government has said it will spend $10 billion in the next seven years to meet Canada's greenhouse gas emissions targets set forth in the Kyoto Protocol. Martin would also like to see the G8 enlarged so that growing economic powers like China can be more effectively included in discussions about issues like global warming.

President Vladimir Putin ushered through the ratification of the Kyoto Protocol in 2004, triggering the treaty's activation. Putin also has said he support's Blair's Africa initiative. Russia, however, is unlikely to increase economic aide to the continent as it struggles to come to terms with its own problems.

The president of the European Commission, Jose Manuel Barroso, will represent the interests of the 25-member European Union at the summit. A host of other world bodies and nations are also officially invited to the 2005 G8 summit to discuss Africa's future, global warming and other issues. India, China, Mexico, Brazil, South Africa, Nigeria, Ethiopia, Tanzania, Ghana, Senegal and Algeria will all take part in official meetings with the G8. Joining them will be the Secretary General of the United Nations, the head of the WTO (World Trade Organization), the IEA (the International Energy Agency), the president of the World Bank, the managing director of the IMF (International Monetary Fund) and the chairperson of the Commission of the African Union.

The G8 has traditionally drawn criticism from a wide range of groups. Non-governmental organizations, celebrities and protestors, all trying to win the attention of G8 attendees, will not be invited to any official meetings and will not be allowed anywhere near the Gleneagles Hotel. That has not stopped them from holding concerts, voicing their opinions in the press and clashing with police on the streets of Edinburgh, Scotland's capital. Whether organized and well funded, like the World Wildlife Fund and pop music's Live 8 concert series, or disorganized and silly, like some Edinburgh protestors dressed as clowns, the main thrust of their efforts has been to encourage the G8 leaders to take decisive action on the issues at hand.