Accessibility links
New York Commuters Respond to London Blasts The United States is raising the terrorist threat level for rail and mass transit systems, but not for airlines, after the bomb blasts that tore through London's transit system. New York City is on heightened alert this morning. Authorities have stepped up security around subways, buses and transit stations.

The United States is raising the terrorist threat level for rail and mass transit systems, but not for airlines, after the bomb blasts that tore through London's transit system. New York City is on heightened alert this morning. Authorities have stepped up security around subways, buses and transit stations. 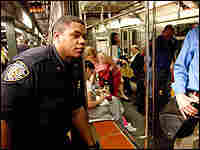 British police say more than 33 people are dead in today's blasts that struck London's subways and buses. Many more are injured. The United States is raising the terrorist threat level for rail and mass transit systems nationally but not for airlines. New York City is on heightened alert this morning. NPR's Robert Smith joins me now from New York.

And, Robert, you spent quite a bit of this morning on the subway. What did you hear from commuters about today's attacks in London?

Well, you know, commuters in New York City sort of perfect this art of denial sometimes when they're taking mass transit, and a lot of the people I spoke to just simply said, `I cannot think about this.' This one man said, `If I spent all my time thinking about what's in that guy's backpack or what might happen to me on the train, I'd never get to work.' Another person, I started to tell them about the London bombings, and they said they didn't want to hear anything about it. They don't want to know how many are dead. They just can't think about it while they're on the subway.

And, you know, there are others who are sort of wary all the time and especially wary this morning. I met one woman who had this whole strategy. She sits next to the door. She had a little flashlight on her key chain in case the lights go out and she said she was nervous, but, you know, no one said that they weren't going to work. They have to go to work, and so they have to take the subway.

MONTAGNE: What exactly is being done to secure New York's transit system?

SMITH: Well, we're hearing a lot of talk right now. The police department here says they have more officers in the subway, especially in the financial district. Amtrak, which comes into Penn Station, is beefing up its security. They said they have canine units. Are--the Port Authority bus terminal they have canine units on the floor. But I have to tell you actually traveling through the subway system, there isn't that massive show of police force that New Yorkers saw during the Republican convention, and especially after the Madrid bombing, there were just more packs of police officers moving through the stations, people--police officers sticking their heads in each car door and looking around to make sure if everything was OK. We're not quite to that level here yet, and some New Yorkers I talked to sort of wished that they saw more officers on the ground this morning.

MONTAGNE: Well, did to you seem--sit it seem normal, in a sense, like a normal morning?

SMITH: Yeah, it was a pretty normal morning, a little quieter than usual in the cars, people maybe a little warier. Certainly there were announcements, maybe more frequent, over the loudspeaker system saying that people should report anything suspicious. You certainly saw a few police officers, but no more than a normal morning. There's going to be a press conference with the police chief and the mayor in under an hour, and they're going to lay out sort of the whole security plan.

MONTAGNE: Do you have any idea what that's going to be? I mean, do you know what they're expected to discuss?

SMITH: Well, they've done this before, and so the main thing they're going to do is they're going to stand in the middle of Grand Central Station and say, `Look, it's safe. We have no credible threats to New York City. People should go about their business.' That's the main thing they usually say. And then we're going to probably talk to them a little bit more about their strategy of--sometimes their strategy is to have just a real visible police presence, not particularly investigating anything, just teams of police officers to make everyone at least feel safe in the subway system.

MONTAGNE: Right. But there has been no, as you understand it, threat to New York in this situation.

SMITH: No credible threat. That's what I hear.

MONTAGNE: NPR's Robert Smith in New York. US cities have stepped up security measures for rail and mass transit systems after today's explosions in London.