Accessibility links
Major Taylor, the 'Worcester Whirlwind' Commentator Lynne Tolman tells the story of Marshall J. "Major" Taylor, an African-American who became a champion bicycle racer in the 1890s and 1900s despite racial barriers and obstacles. Taylor is remembered annually at an all-uphill bike competition in Worcester, Mass. 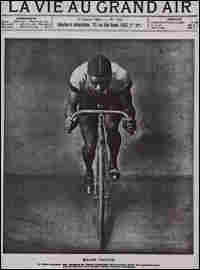 As the Tour de France heads into its second week, with all eyes on six-time winner Lance Armstrong, it's worth remembering a great cyclist from the past.

Commentator Lynne Tolman tells the story of Marshall J. "Major" Taylor, who won his first bike race at age 13, in the year 1892. But Taylor, an African American, was banned from competition in his hometown of Indianapolis, and by a major national biking association. Taylor's trainer moved with him to a more tolerant community, Worcester, Mass., where Taylor developed into the "Worcester Whirlwind." By 1898, racing where he could, he was a record-breaking sprinter and a successful endurancer racer, too.

After the turn of the century, Taylor moved on to dominate competition in Europe and Australia before retiring in 1910. He made a significant amount of money in his professional racing career, but business reversals and racial obstacles made his later life difficult. He is buried in a pauper's grave in Chicago.

But he's remembered every year back in Worcester with the George Street Bike Challenge. It's a sprint along a street where Taylor once trained -- and it's all uphill.