How Al Qaeda Has Evolved Since Sept. 11

How Al Qaeda Has Evolved Since Sept. 11 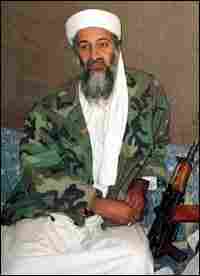 Osama bin Laden, in a Nov. 10, 2001, photo. He may no longer be as intimately involved in orchestrating al Qaeda's attacks as he was before Sept. 11, 2001. Reuters/Corbis hide caption 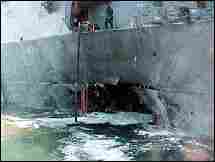 A large hole is left in the side of the USS Cole after it was bombed by terrorists in the port of Aden, Yemen, in 2000. The attack, blamed on al Qaeda, killed 17 American sailors and wounded 39. U.S. Department of Defense hide caption 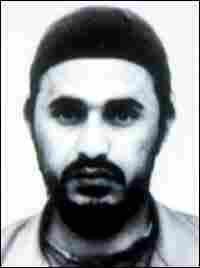 Abu Musab al-Zarqawi, believed to be the leader of al Qaeda in Iraq, in an undated file photo. PETRA/Reuters/Corbis hide caption

A History of Attacks on Western Targets July 7, 2005

Al Qaeda was created by Osama bin Laden as a support group for Arab fighters who went to Afghanistan in the 1980s to fight against the Soviet army. It is now waging a global war against the United States and its allies with increasingly deadly bombings, many of them carried out by suicide attackers.

Here is a primer on what is known about al Qaeda and how it has changed since the attacks on the U.S. in 2001:

It's been nearly four years since the Sept. 11 terrorist attacks. What do we know about the state of al Qaeda as an international organization?

Most experts who study terrorism say al Qaeda is no longer the top-down, centralized organization it was before Sept. 11. They say the U.S. war in Afghanistan has deprived it of a safe haven and of the training camps it used to prepare thousands of recruits for various kinds of terrorist acts. The war has also made it difficult for Osama bin Laden to communicate with others around the world.

Al Qaeda, according to terrorism specialists, has now become much more of an international jihadist movement, a loose association of like-minded militants spread out around the globe. They may plan attacks on their own, without bin Laden's advance authorization or even knowledge.

What sort of leadership does it have now?

This is a very difficult question to answer. Osama bin Laden is still alive, as is his second-in-command, Ayman al Zawahiri, the former Egyptian doctor. They are both believed to be hiding in the remote and mountainous region along the border between Pakistan and Afghanistan.

They communicate frequently with the outside world, through regularly released audio and videotapes. Whether they also maintain close operational control of terrorist cells around the world is not known. Many experts say they don't.

Another key figure is Abu Musab al Zarqawi, who appears to be the leader of al Qaeda in Iraq. It is not known precisely how many troops Zarqawi commands in Iraq, but it is generally assumed that bin Laden has acceded to his leadership of the foreign fighters who are active there.

Many of al Qaeda's former leaders have been killed or arrested in the U.S. effort to defeat terrorism. This suggests that leadership has devolved to key figures in local or regional cells around the world, and they are deciding what kinds of attacks to carry out.

How large is al Qaeda?

We know that al Qaeda has affiliates and cells in many countries all over the globe, especially in the Muslim world. Since Sept. 11, 2001, there have been attacks in Saudi Arabia, Egypt, Morocco, Tunisia, Turkey, Pakistan, Indonesia, the Philippines and Yemen, as well as in Spain and now London.

Estimates of the number of recruits trained in Afghanistan's camps for ten years before Sept. 11 range from 20,000 to 100,000. Not all of them were prepared to carry out attacks such as those that took place in London. Many received guerrilla insurgent training, and may now be putting their skills to work in Iraq. But many did learn about the surreptitious use of explosives, detonators and the tradecraft of infiltrating foreign societies and planning attacks secretly from within.

Many experts believe recruiting for al Qaeda-linked groups has benefited from the widespread hostility in the Muslim world to the U.S. war in Iraq.

Where is al Qaeda the strongest?

Again, this is hard to say. One target of intense interest to al Qaeda, and especially to bin Laden, is Saudi Arabia. Numerous terrorist attacks have taken place there during the past two years. There is a separate group that calls itself Al Qaeda in the Arabian Peninsula. It has claimed responsibility for most of these attacks, which have largely targeted foreign workers, especially Americans, living in Saudi Arabia.

In addition, many of the foreign fighters in Iraq are believed to be citizens of Saudi Arabia.

Although there have been many arrests in Europe, al Qaeda appears to remain strong there. The Madrid train attacks last year were evidence of that. The London bombings may be as well if they prove to be linked to al Qaeda.

The large Muslim population across Europe, coupled with the continent's highly porous borders, makes it easier for secret cells to operate in Europe. In addition, the al Qaeda-linked movement seems to be able to attract many new recruits in the communities and mosques of Europe, among those who feel out of place in societies they perceived as hostile to Islam.

What are the characteristics of an al Qaeda attack?

Al Qaeda-linked cells have learned that multiple, coordinated attacks can inflict the most psychological as well as physical damage on a target. This has been a favored tactic at least since 1998, when al Qaeda simultaneously attacked the US embassies in Kenya and Tanzania.

Attacks such as those in London and Madrid have also coincided with high-profile political events, but this is a relatively new tactic. The plotters in Madrid learned that timing can have a maximum political impact when three days after the train bombings, Spanish voters ousted the conservative government, which had supported the U.S. invasion of Iraq.

The timing of the London attacks coincided with the opening of the G8 summit in Scotland. In effect, the attackers overshadowed the summit of the world’s most powerful leaders, sending a message that even with the security associated with such an event, the people of London were not safe.

One of the most significant trademarks of al Qaeda attacks is unpredictability and ingenuity. Over the course of its violent campaign, its operatives have consistently come up with new types of targets and new tactics.

What does al Qaeda want?

President Bush insists such attacks are meant to destroy the liberties of a free society and simply do evil.

But bin Laden and other leaders of al Qaeda and its associated groups have been issuing statements for many years that include specific goals. They call for the withdrawal of U.S., British, and "other Crusader forces" from the lands of Islam, specifically from Saudi Arabia, Iraq, Palestine and elsewhere.

In a message to the American people several days before the 2004 presidential election, bin Laden stated that he and his supporters were fighting against the policies of the United States and its allies.

In a message posted on an Islamic website, a group taking responsibility for the London attacks said they were in retaliation for the British "massacres" in Iraq. It also warned Denmark, Italy and "other Crusader states" to withdraw their troops from Iraq and Afghanistan or face similar attacks.

Terrorism experts do not agree on the meaning of these messages. Some say they are disingenuous and that even if the U.S. and its allies change policies or withdraw troops, the attacks will continue. But other experts insist the U.S. needs to understand that its policies in the Middle East and elsewhere elicit a terrorist response and need to be reevaluated.