Accessibility links
Serbians Still Divided Over Srebrenica Massacre Serbian TV recently broadcast a video showing killings in the 1995 massacre of Bosnian Muslims in Srebrenica. But a large number of Serbs continue to believe either that the video is a fake or that all sides committed atrocities and are equally guilty. Even so, Serbian President Boris Tadic plans to attend 10-year anniversary memorial of the massacre.

Serbian TV recently broadcast a video showing killings in the 1995 massacre of Bosnian Muslims in Srebrenica. But a large number of Serbs continue to believe either that the video is a fake or that all sides committed atrocities and are equally guilty. Even so, Serbian President Boris Tadic plans to attend 10-year anniversary memorial of the massacre. 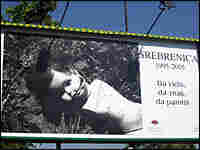 Ten years ago this month, between seven and 8,000 unarmed Bosnian men and boys were executed by Serb forces at Srebrenica. It was the single worst atrocity committed in Europe since World War II. As the anniversary approaches, Serbs find themselves torn between remorse and denial. While Serbs are slowly accepting the need for cooperation with the United Nations War Crimes Tribunal, many are still unwilling to acknowledge that war crimes were committed in their name. NPR's Sylvia Poggioli reports from Belgrade.

Stark billboards recently appeared on Belgrade streets. Sponsored by a youth human rights group, the photographs show a broken doll, a hall filled with coffins and a skeletal hand in a mass grave. And the written message urges Serbs to, `See, Know, Remember Srebrenica.' Even more harrowing have been the images of a recently discovered video that aired on Serbian TV.

POGGIOLI: The video was shot by a Serbian paramilitary group known as the Scorpions in July 1995. It starts in Serbia with the men being blessed by a Serbian Orthodox priest before setting out on their mission.

POGGIOLI: And it ends in a Bosnian wood with the Scorpions executing six emaciated Muslim men and boys, hands tied behind their backs.

POGGIOLI: The Serb reaction to the video ranges from disbelief to horror.

POGGIOLI: Belgrade taxi driver Zoren Krezovich(ph) was shocked by the state of denial by many of his countrymen.

Mr. ZOREN KREZOVICH (Taxi Driver): (Through Translator) They're still surprised and they still don't believe it. They think it's a photo montage, and they're saying that it's impossible for a Serbian soldier to shoot someone at the back.

POGGIOLI: Krezovich is convinced General Ratko Mladic, indicted by the War Crimes Tribunal for ordering the Srebrenica massacre, must be extradited to The Hague.

Mr. KREZOVICH: (Through Translator) It's terrible to kill so many people in four days. It is genocide, a classic case of genocide.

POGGIOLI: Prime Minister Vojislav Kostunica, a moderate nationalist who has denied that Serbs were more responsible than other sides in the bloody breakup of Yugoslavia, strongly condemned the crime and announced the arrest of several of those caught in the video. But the Serbian parliament, dominated by hard-line nationalists and socialists still loyal to ousted strongman Slobodan Milosevic, failed to adopt a resolution acknowledging the Srebrenica massacre. Foreign Minister Vuk Draskovic is disappointed.

Mr. VUK DRASKOVIC (Serbian Foreign Minister): That condemnation we needed because never in our history--before Slobodan Milosevic, of course--Serbs used to kill civilians, prisoners to destroy cities. All those who committed such shameful crimes disgraced our history, our culture, our tradition.

POGGIOLI: While Serbian President Boris Tadic, whose party is in opposition to the government, has spoken out forcefully on the issue of Serb responsibility, the Kostunica coalition government, which depends on the parliamentary support of Milosevic's socialists, has sent ambivalent messages on the war crimes issue.

Under intense international pressure in the first six months of this year, members of the government convinced 12 war crime suspects to surrender to the tribunal in The Hague. The suspects, including several top-ranking generals, were presented as patriots to a public opinion which in large part considers the tribunal anti-Serb. Dejan Anastasijevic, a journalist with the liberal weekly Vreme, says these kinds of extraditions send the wrong message.

Mr. DEJAN ANASTASIJEVIC (Vreme): The government generally tends to see the war crimes issue and the cooperation with the tribunal as some sort of foreign debt which can somehow be negotiated or canceled, written off as a part of foreign policy, not as a moral question.

POGGIOLI: But other members of the Serbian leadership are following a different path.

POGGIOLI: This week for the first time, government ministers took part in a public discussion on war crimes, justice and reconciliation. Participants in the roundtable, which will be repeated in other Serbian towns, included judges and prosecutors in Serbia's newly created special war crimes court. Minister for Human and Minority Rights Rasim Ljajic said that squarely confronting the past has to be part of state policy.

Mr. RASIM LJAJIC (Serbian Minister for Human and Minority Rights): (Through Translator) The state must stop trying to push the past under the rug. Criminals must appear in court; victims must be given satisfaction. These are the preconditions for the peoples of this region to start what will be a long and painful process of reconciliation.

POGGIOLI: Ljajic said the Serbian government is fully aware that the country's chances of entering the European Union and ending years of international isolation depend on the speedy extradition of General Ratko Mladic. There had been high expectations that Mladic would be arrested before the 10th anniversary of the Srebrenica massacre, but the indicted general is said to be under strong protection of hard-line sectors of the army and secret service, a ring of protection over which the government has no control. Sylvia Poggioli, NPR News, Belgrade.