Accessibility links
Leaving Identity Issues to Other Folks For years, NPR listener Phyllis Allen found her beliefs in the social movement of the times, from civil rights to Black Power. Now in her 50s, she is finally able to believe in the woman she is. 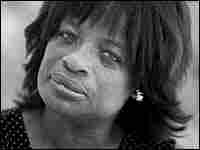 Phyllis Allen has sold Yellow Pages advertising for 15 years. She spends about half her working hours in her car covering her territory around Dallas and Fort Worth, Texas. When she retires, she hopes to pursue her first passion, writing. Nubar Alexanian hide caption 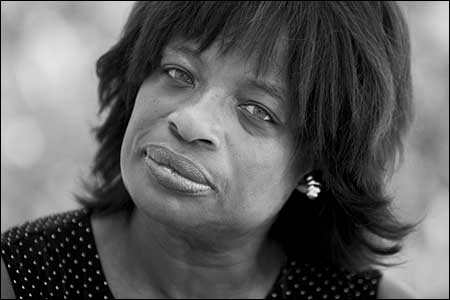 Phyllis Allen has sold Yellow Pages advertising for 15 years. She spends about half her working hours in her car covering her territory around Dallas and Fort Worth, Texas. When she retires, she hopes to pursue her first passion, writing.

Standing in the rain waiting to go up the steps to the balcony of the Grand Theater I gripped Mama's hand and watched the little blond kids enter the lobby downstairs. It was the '50s, I was "colored" and this is what I believed: My place was in the balcony of the downtown theater, the back of the bus and the back steps of the White Dove Barbecue Emporium. When I asked Mama why this was so, she smiled and said, "Baby, people do what they do. What you got to do is be the best that you can be."

We got our first television in the '60s and it brought into my living room the German shepherds, snapping at a young girl's heels. It showed children just like me going to school passing through throngs of screaming, angry folks, chanting words I wasn't allowed to say. I could no longer be "colored." We were Negroes now, marching in the streets for our freedom -- at least, that's what the preacher said. I believed that, even though I was scared, I had to be brave and stand up for my rights.

In the '70s: beat-up jeans, hair like a nappy halo and my clenched fist raised, I stood on the downtown street shouting. Angry young black men in sleek black leather jackets and berets had sent out a call from the distant shores of Oakland, Calif. No more non-violence or standing on the front lines quietly while we were being beaten. Simple courtesies like "please" and "thank you" were over. It was official: Huey, H. Rap, and Eldridge said so. I believed in being black and angry.

By the '80s, fertility gods lined the walls and crammed the display cases of all my friends' houses. People who'd never been closer to Africa than a Tarzan movie were speaking broken Swahili. The '80s made us hyphenated: African-American. Swaddled in elaborately woven costumes of flowing design, bright colors and rich gold I was a pseudo-African, who'd never seen Africa. "It's your heritage," is what everybody said. Now, I believed in the elusive promise of the Motherland.

In the '90s, I was a woman whose skin happened to be brown, chasing the American dream. Everybody said that the dream culminated in stuff. I believed in spending days shopping. Debt? I didn't care about no stinkin' debt. It was the '90s. My 401(k) was in the mid-six figures and I believed in American Express. Then came the crash, and American Express didn't believe in me nearly as much as I believed in it.

Now, it's a brand new millennium and the bling-bling, video generation ain't about me. Everything changed when I turned 50. Along with the wrinkles, softened muscles and weak eyesight came the confidence that allows me to stick to a very small list of beliefs. I'll leave those identity issues to other folks. I believe that I'm free to be whoever I choose to be. I believe in being a good friend, lover and parent so that I can have good friends, lovers and children. I believe in being a woman -- the best that I can be, like my Mama said.