Accessibility links
Excerpt: 'Hole in the Sky' Author William Kittredge tells the story of his family's life in the West, from their arrival through to his own life.

Excerpt: 'Hole in the Sky'

Excerpt: 'Hole in the Sky' 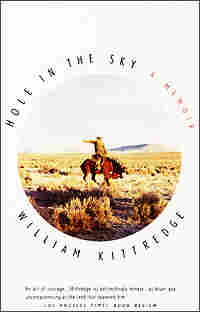 Author William Kittredge tells the story of his family's life in the West, from their arrival through to his own life.

Excerpt from Hole in the Sky, Chapter 1:

Maybe children wake to a love affair every other morning or so; if given any chance, they seem to like the sight and smell and feel of things so much. Falling for the world could be a thing that happens to them all the time, I hope so, I hope it is purely commonplace. I’m trying to imagine that it is, that our childhood love of things is perfectly justifiable. Think of light and how far it falls, to us. To fall, we say, naming a fundamental way of going to the world–falling.

The year I was to turn six, the spring of 1938, out in the backlands of southeastern Oregon, I began a curious, end-of-innocence time, trying to fathom what there was to value about life. I was fresh from something like a year in hospital rooms, recovering from polio, People said I had almost dies; I wanted to know why it was better to be alive.

At this moment I am nearing sixty, and wish I could go back to the world inside that child. I want to reinhabit his direct curiosity about himself, to know as that child knew. I want to smell the sour stink of springtime, and taste the air as I stood out on the lawn in front of the house my father had built for us.

The men who worked on our ranch were hauling manure from the corrals on horse-drawn stoneboat sleds, rebuilding the long dams across the swales in the hay meadows, flood-irrigating the swamp grasses, which had all at once turned brilliantly and variously green, sedges and field lilies, and tules in the sloughs. Waterbirds would come and go, and my father would worry about coyotes killing spring claves, and raccoons in the nests of ring-necked pheasants, sucking eggs in thickets of willow that were sprung to leaf. The world was beginning to accumulate an irresistible momentum.

Around May 10 the homesteader’s row of Lombardy poplars in front of our house would crack their heart-shaped buds. The translucent lime-green leaves would emerge, and cast their tiny flittering shadows over my mother’s face as she studies the morning. I thought the world was alive like a creature, and it was. Soon the lilac would blossom. It was the high beginning of true spring. My father’s twenty-four-hour-a-day frenzy of farming was just about finished. On the far side of Warner Valley thousand of acres of flood-irrigated plowground had been disced and harrowed and drilled to oats. There was nothing left but to watch the growing, and hope the killing frosts were behind us.

In the evening my father would drive along the central banks to study his crops as they emerged in undulating rows across the dark peat soil of the old swamplands. We could speculate on how much the seedlings had grown in just one day. We thought we could smell the growing. That little boy had no intimation that those moments would come to stand in memory as his approximation of perfection: his family, his life before him, the world in renewal.

Warner Valley is the main staging ground for my imagination. We never learned much in the way of local and family history, but I know my own stories, and Warner is a landscape where the names of people are connected to things that happened around me, and what happened reminds me of where, and then we are back to the landscape and another round of connection.

What I want to recall are mornings when I would go outside by myself, just after daybreak. I would slip from the bedroom I shared with my younger brother, while he was sleeping, and wander barefoot on the lawn still wet with dew. The air was thick with the reek of damp sage and greasewood and the raw odor of the apple orchard in full blossom, and the stench of cows*** from the shed where Clyde Bolton milked the three cows my father insisted on keeping. That boy felt like he was full of the world, breathing it into himself, and he was.

His thinking is easy to remember; I don’t know why he had come to his thoughts but I recall how carefully he tried to think them through, and how he came to tell himself there was no reason for anything except for this pleasure in the love of what we are. I would like to reclaim the ease and clarity with which I was able to think about what I was and what I wanted.

That very young boy out on the lawn under the new leaves of the poplar, beside the white house: the waterbirds in their great V-shaped flocks above him in the springtime sky. He can hear them calling, so many birds, hundreds of thousands of waterbirds. In those years, according to wildlife biologists, a quarter-million waterbirds moved through the Warner every spring, going north to the Canadian and Alaskan and Siberian tundra, to the enormous rivermouth marshes where the Mackenzie and Yukon empty into the sea. That boy is trying to make an intellectual shape out of his feelings for the world. Those waterbirds, calling and honking, undulating against the sky like music we used to know, birds beyond numbering. It is always pure pleasure to begin naming them: green-winged teal and blue-winged teal and cinnamon teal and redheads and canvasbacks and buffleheads and mallards and white-winged snow geese and the Canada honkers and the lesser Canadians.

It’s a list I’ve run through many times. Rilke says, in the ninth Duino Elegy, “Perhaps we are here in order to say: house, bridge, fountain, gate, pitcher, fruit-tree, window” – It was just that nobody in my family could agree on anything, much less the right life. At the end we had more than twenty-one thousand irrigated acres in Warner Valley, something beyond another million acres of leased Bureau of Land Management rangeland. We ran more than six thousand mother cows. It could have been a paradise; maybe it was, maybe it still is.

The Great Depression was hanging over most everybody in our outback part of America, but my father was harvesting huge grain crops, and it was being said that he had “turned things around.” People were beginning to look to him for help.

Some distant relatives came to talk about taking a job. I remember their black, square-doored Model A pickup truck loaded with their crated possessions, and there she was. I knew her at once, in a quite classical recognition: little girl, maybe five years old. It was simple and immaculate; drawn to her like an animal sensing home, on a bright autumn day in our lost valley amid the sagebrush distances, the sweep of our oncoming lives feathering away before us, I was in what I recognized at once as love. 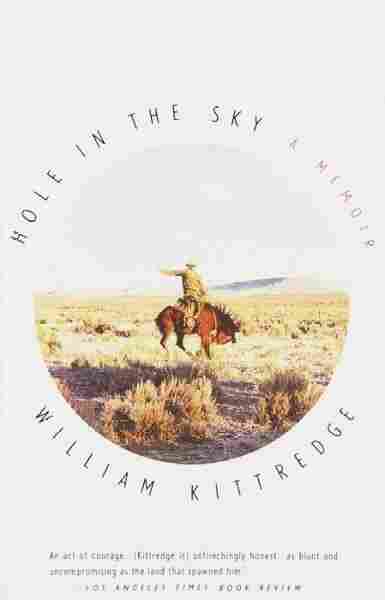 Hole in the Sky