Accessibility links
Excerpt: 'How I Became Hettie Jones' Hettie Cohen moved to New York's Grenwich Village from Queens in the 1950s, where she married controversial black poet LeRoi Jones. Cultural icons Allen Ginsberg, Thelonious Monk, Jack Kerouac and Billie Holiday were just a few of the people who drifted through their lives.

Excerpt: 'How I Became Hettie Jones'

Excerpt: 'How I Became Hettie Jones'

Hettie Cohen moved to New York's Grenwich Village from Queens in the 1950s, where she married controversial black poet LeRoi Jones. Cultural icons Allen Ginsberg, Thelonious Monk, Jack Kerouac and Billie Holiday were just a few of the people who drifted through their lives.

I started leaving home when I was six and weighed thirty-eight pounds. Lying on a mountainside, where my sister and I were at summer camp, I had my hands in the air pretending to weave the clouds, as I had that morning begun weaving a basket.

The basket was on my mind. The night before at the lake I'd been shown the reed, soaking, beautiful as it was, presumptuous to alter. But in the morning the damp, pliant skein and the texture had thrilled me. For two years I'd played piano and tap-danced, but the basket seemed the very shape of my pleasure in doing, or making. Which pleasure was more important to me than any other feeling. It surpassed my love for my family, and at home I was guilty about it.

At camp this guilt had gone and there was such relief from home, where my parents' bickering knotted the air. My mother was smart and right; my father would have fun in his life. I already knew that loving them equally didn't help, that theirs wasn't my fight, that they each loved me despite it. Still I hated their endless natter, and here at camp the soft pleasant language of encouragement, the pervasive good humor, was as sweet as the grass that now pillowed my head.

Suddenly I heard a commotion, someone calling my name, and there stood my parents! Come to take me home, I was sure. Why else make a whole day's journey?

But the basket – to have to abandon it! I burst into tears and ran.

Later, after the explanation that they had simply come to visit, my mother embraced me. "I knew that was you from the top of the hill," she said. "You were the one with her hands up, making shapes in the air." But I knew she didn't understand that this love of mine would have to take me away from her.

In Laurelton, the finished basket stayed among cans of string beans and boxes of cornflakes and the salami hung to dry on its string, in a pantry with a narrow window into a porch. I never carried a key to the house, and if, as sometimes happened, my mother went out and forgot to leave the key in the milk box, I would boost myself up and wriggle through this window, trying not to knock over the pickle jars or catch my foot in the high, braided handle of the basket, which was never put to much use. Banished, it lost magic.

When my mother was out she was often volunteering – for the Red Cross, or the Girl Scouts, or various Zionist causes; eventually she chaired her local Hadassah, then all of Long Island. Amazing to me now, I never once saw her in action. What we did together was shop. My mother, born Lottie Lewis, was a small woman with aspirations to quality, who sewed like a master tailor but was barely a journeyman cook – I saw my first clove of garlic only after I'd left her house. She liked the pictures in House Beautiful, the stories in Reader's Digest, and her treat was the Broadway play: she'd put on her mink and her amethysts, and take the train to meet my father in the city. But she never had a maid, and for many years she washed the family's clothes by hand in a sink in the cellar. Sometimes she hummed a little, ironing in the kitchen on the board that pulled out form the wall. Companionably, I ironed beside her when I came home from school: first I learned pillowcases, then handkerchiefs, then slips with lacy edges. I loved my mother, except when she attacked my father, and she was always good for a hug. But if in my passionate way I went on for too long, she'd sigh and call me "musher," and unwrap my arms.

And she wasn't much help. I was ten when I tried to show her a magazine article I'd read about menses. "Look," I suggested. My mother, at the foot of the stairs, glanced at the magazine and went on up. "Well, now you know," she said over her shoulder. About sex she told me nothing; of men she said only: "Marry someone who loves you more." She, for one, should have known how that fails. But I never thought about marriage. I had other plans and love was all I wanted.

I felt kin to my father's soul, his broader humor and bodily ease. He was a short, barrelly, dark-skinned man named Oscar, who boasted a jaunty grace – he did Charlie Chaplin's wobbly walk and any dance from the two-step to the rhumba. He and one of his brothers had a loft full of pounding presses near Union Square in Manhattan, where they manufactured advertising displays – tall cardboard cutouts on easels, stands for sunglasses. Sometimes, after shopping at Ohrbach's and Klein's with my mother, I'd be taken around the corner to that thunder and inky perfume. There was even a special, temperamental machine that all by itself made a case for your pocket comb. It could only be fixed by my second-youngest uncle, temperamental himself – a nighttime cabbie, sometimes carny – with whom, like that machine, I was terribly, singly, in love.

Weekdays my father left on the early train and came home at night with the paper under his arm; Saturdays he brought a roll of bills in his pocket. Predictably in through the side door, petting the dog and forgetting to wipe his feet. Though he had my sympathy, he was impatient with all and sundry, cursing the storm windows he had to put up, driving like a cowboy. Only in sports could he fling his arms to effect, and he taught us – my sister and I both lefties like him – to throw and catch and fly-fish. In his arms I learned to love water. He took me to Ebbets Field and Yankee Stadium. One day, left to mind me, he took me to the races at Belmont, though he knew I was underage. Refused admission, he gave me to the woman in whose driveway he'd parked the car, who promised to sneak me in. I'd never been left with a Christian before. But then this cheerful, adventurous woman tramped me through sweet-smelling fields, and squeezed me past a board fence – and there I soon was, beside my grinning Daddy, the only kid at the Belmont Raceway!

But Oscar and I, joined at the heart, were separated at the head. There were only a couple of books in our house; he'd never read them or any others and wouldn't. Once, catching me at it, he pointed to the pages in my hand and said, "You won't find life there."

But there wasn't much for me in Laurelton, where we'd come from polyglot Brooklyn; no Negroes, Hispanics, Italians, only some Anglos and Irish who couldn't afford to move away from the Jews. I went to school with their children, but never to their homes. There was a firm inevitability to this; you just didn't mix, exactly the way you didn't serve milk with meat.

The milk/meat rule was all that remained of the kosher laws. My parents spoke Yiddish only to hide things. Even in English they rarely referred to past. Their families had come from Poland, or was it Russia, they weren't sure. And Brooklyn was nothing to speak of either, as if poverty rendered you undeserving of history. At night, in my narrow maple bed, under the starched, white, ruffled, pink-ribbon-threaded spread my mother had made, I'd make up stories with myself as the hero of great, seafaring adventures. The only hint I ever had of my future was on our every other Sunday trip to Newark, to visit my mother's family, when we'd stop for a sandwich at Katz's on the Lower East Side. "Send a salami to your boy in the Army" read the signs, but I cared less for the food than for the long, mysterious reach of Houston Street, the way it seemed to hold, river to river, some secret old New York that hadn't ceased to exist, not the way you were led to think. Laurelton never spoke of that place, just as they never would see my return to it. But I could see, from our round gray 1946 Chrysler, some streets I would have liked to set foot on. I could even have caught a quick piece of the Village before we cut a sharp left and left it all behind at the Holland Tunnel.

My sister, Susan, olive-skinned with flaxen hair and royal blue eyes, was told and told again how her looks would bring her a wealthy husband to change her life. But she clung to her childhood sweetheart, and married him at twenty.

I was fourteen then and leaving on my own, as soon as possible. I passed the test for Music and Art High School, though the piano piece I played was called "Malagueña," and the teacher, with a sniff, said, "Where is your Bach?" But Music and Art, in Manhattan, would have meant a two-hour trip. Far Rockaway High, where I got beached instead, was a fifty-minute ride on the Long Island Railroad. I bided my time in the smoking car, underexposed and smoldering. I no longer knew what music I wanted to play. When I improvised something atonal I thought of as "modern," my mother would call, gaily: "That doesn't sound like practicing!" I began to hang out in the lunchroom with boys who talked anarchy.

By 1951, the year we were labeled the Silent Generation, I'd been recommended to silence often. Men had little use for an outspoken woman, I'd been warned. What I wanted, I was told, was security and upward mobility, which might be mine if I learned to shut my mouth. Myself I simply expected, by force of will, to assume a new shape in the future. Unlike any woman in my family, or anyone I'd ever actually known, I was going to become – something, anything, whatever that meant.

To accomplish this I felt the need to cloister myself for a while, away from the usual expectations at what was known as an "all-girls college." Accepted at Vassar I chose instead Mary Washington, the woman's college of the University of Virginia. I made this decision from pictures only. I had some vague suspicion that Vassar might make me a snob, and the South was cheaper and farther from home.

My parents waved good-bye at Penn Station. I had never been farther south that Freehold, New Jersey, where my second-oldest uncle had a chicken farm. It was September 1951. I had just turned seventeen.

© 1990 by Hettie Jones, and reprinted with the permission of the publisher, Grove Press, a division of Grove/Atlantic, Inc. 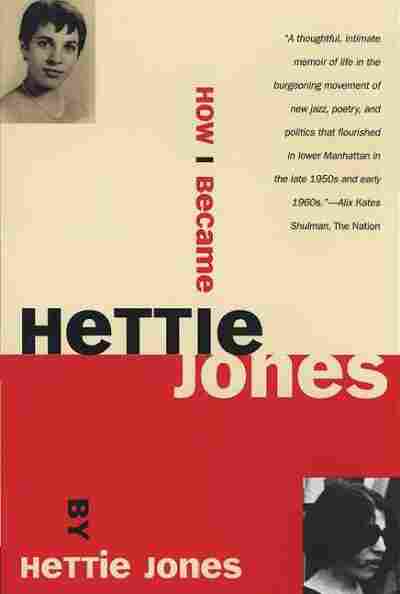 How I Became Hettie Jones