Accessibility links
Garden in a Glass: Herbal Teas, Lavender Martinis When a food writer's herb garden grew wild and out of control, she tried to tame her rampaging flora in teas and martinis. Her herbal concoctions, however, also unlocked a torrent of memories. 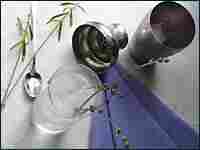 Lavender finds its way into a martini, basil into a mojito, and a bevy of herbs make a comforting homemade tea. Recipes below. hide caption

When I first moved to the country, I thought: An herb garden might be nice. I daydreamed about parsley for the soup stock, rosemary for the grill. It seemed harmless enough. But it turned out that these were the warning signs of an addict in search of an obsession.

In spring, I laid out string-straight stone paths in an abandoned corner of my yard and squatted on the chilly flagstones, peering at the sandy soil for signs of botanical quickening.

T. Susan Chang is a New England-based freelance writer specializing in food and food policy. She has written for the Boston Globe, Yankee Magazine and Taste of New England.

More about the author

I didn't know then that most of our culinary herbs -- parsley, thyme, sage, oregano -- are little more than Mediterranean weeds. They thrive in poor, sandy soil that supports no other life. In their secret hearts, most herbs are wild, robust, prolific and distinctly evangelical in persuasion.

Before long, the earth began to yield seedling armies, whose rank growth overtook the garden. Whiplike cords of mint raced across the flagstones. Basil bolted -- and when I pinched the tips to stop it -- forked and bolted again. Three-foot fronds of dill swayed back and forth, their brimming umbels of flat seeds spilling everywhere, and the lemon balm crept across the brick border when no one was looking.

If I had fancied myself a steward of useful plants, I was no longer their master. This was a garden of cryptoinvasive perennials, each scheming for ascendance in its tiny, brickbound kingdom. In the evening my fingers were stained with mint juice and my head swam with thick aromas.

It was time to take action. A pinch for the pasta, even a fistful for salad wouldn't suffice. Gathering armfuls of herbs, I set out to drown their perfumes in sun tea.

From dawn till dusk, the tea steeped in a pitcher on the blazing doorstep, recording the long hours of daylight in liquid form. At sunset, I brought it inside and lifted the lid, releasing the dusty-apple scent of chamomile. Strained and iced down, its captured light and heat turned cool and comforting, like an intimate conversation between good friends just passing into memory.

But I had bigger plans. Like a cocktail expert, I would press my herbs into sugar syrup to capture the fragrance of their volatile oils -- linalool, eugenol, citral, thujone, camphor. One by one, I thought, I would tame them. My counters filled with greenery as I began to extract oils with apothecary zeal.

My essences and syrups cried out for experimentation, but on humid midsummer afternoons a single concoction was enough to set curious effects in motion. Strange memories began to surface.

Two sips of a tart lemon balm martini brought back the blurred headlights of taxicabs on a rainy street and the shriek of a trombone in a ballroom. A bracing lavender vodka tonic traveled down the paths of memory and returned with images of cool galleries and deserted museums. Mint julep invoked scorching heat, distant thunder, and the stridulation of crickets in prickly grass.

Last was a basil mojito, a variation on the mint-infused Cuban classic. Basil, it was once said, belonged to the devil; indeed, it behaved fiendishly in the presence of demon rum. After a few sips I could hear waves crashing on tropical sands; after a few more I was reading oracles in the smoke from the Weber grill.

Later, in the garden, as the shadows dimmed to shade, I reflected: I had set out to imprison a spirit in a glass; yet had instead been captivated.

I would return to the house, to resume my role as daughter, mother, wife. The herbs would bloom and propagate, wither and die. If our transaction was as fleeting as volatile oil, it was also boundless, and replicable. For now, our secrets remained shrouded, like articles of faith -- to be activated when needful, and (like most certainties) otherwise forgotten.

Any combination of the following:

honey or simple syrup to taste

clear glass or plastic pitcher with a close-fitting lid

Crush the leafy herbs lightly between your hands before combining them with the tea bags, herbal flowers and cold water in the pitcher and set out in a sunny spot with maximum daylight. The tea will take several hours to reach full strength. Strain and serve over ice. Sweeten with honey or simple syrup if desired.

Bring the sugar and water to a boil in a small saucepan, until sugar dissolves. Simmer a few minutes; cool and store in a glass or ceramic container.

With a wooden muddler or the back of a spoon, press the lemon balm leaves in the simple syrup to extract the oils and flavor the syrup. Combine with the gin, vermouth and plenty of ice in a cocktail shaker and strain into a cocktail glass. Garnish with lemon balm and serve immediately.

Combine the lavender syrup and the vodka in a cocktail shaker and shake with plenty of ice.

Strain into an ice-filled highball glass.

Top off with tonic water and stir before drinking.

Bring the lavender, sugar and water to a boil in a small saucepan, until sugar dissolves.

Simmer a few minutes and let cool before straining and storing in a glass or ceramic container.

With a wooden muddler or the back of a spoon, firmly but gently press the basil leaves with the lime and sugar or simple syrup in a glass. Add the rum, plenty of ice and top off with soda water. Stir and garnish with lime wedges and basil if desired.