Accessibility links
A Hippo and Tortoise Tale Owen the hippo and Mzee the giant tortoise are survivors. Owen braved a tsunami, and Mzee is 130 years old. They hang out at a sanctuary in Kenya. Dr. Paula Kahumbu tells a true tale of unlikely pals.

Listen
A Hippo and Tortoise Tale 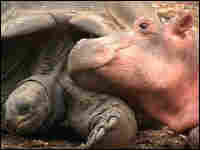 Since he was rescued, Owen has trailed after Mzee, but he will eventually be sent to live with another hippo. Peter Greste hide caption

It sounds like a fable or a fairy tale. The main characters are an orphaned baby hippopotamus and a 130-year-old giant tortoise. The hippo was rescued from a natural disaster of biblical proportions, and the tortoise was meant to be dinner a century ago. But the story of Owen the hippo and Mzee the tortoise is absolutely true.

The animals are both the wards of Dr. Paula Kahumbu, general manager of Lafarge Ecosystems, which runs a sanctuary in Mombasa, Kenya. She tells Jennifer Ludden the story of a highly unlikely friendship and the children's book she helped write to tell the tale.

December 26th, 2004 started off as a normal, quiet day. My son Joshua and I were out for a morning walk along the beach in front of my home when suddenly the sea began to race in. Within minutes the ocean became threatening. The tide had risen well beyond the high water mark. At that instant it became apparent the Tsunami that had started nearly 4,000 miles away far across the Indian Ocean would impact us as well. In less than 12 hours the Tsunami had finally reached the coast of Africa from its point of origin in Banda Aceh.

We ran from the beach back to my house where my sister and her children were waiting for us. They were all crying having just seen on television the haunting images of the devastating Indian Ocean Tsunami. Although we escaped the waves, a one year old hippopotamus 80 kilometers away was not as lucky.

Just before Christmas the unseasonably heavy rains near Malindi town washed a family of hippopotamuses down the Sabaki River and out to sea. The residents of the town tried in vain to urge the family back up the estuary. When the Tsunami hit Malindi, the sea turned angry, the sky clouded over and for a moment the hippos disappeared and were forgotten as all efforts went to rescuing the stranded fishermen.

The next day only one hippo could be seen. It was the baby and he was stranded on the reef. Hundreds of people came to watch the efforts to rescue the hippo. It took ropes, boats, nets and cars --though the hippo was tired he was still fast and slippery. It took a brave rugby tackle to finally capture him, and the cheering of the crowd could be heard over a kilometer away.

Lafarge Eco Systems agreed to provide a home for the baby hippo and I rushed to Malindi to collect him. Tangled in fishing ropes, angry and tired, the hippo did not seem to appreciate our rescue at all. As we left for Mombasa, the crowd unanimously agreed to name him 'Owen' in honor of the volunteer who tackled him to the ground.

Exhausted, confused and extremely frightened, Owen immediately ran to the safety of a giant tortoise when we released him in Haller Park. Mzee, our 130 year old tortoise, just happened to be nearby and he was very surprised by Owen's odd behavior cowering behind him as a baby hippo does to its mother. Mzee quickly came to terms with his new friend and even returned signs of affection. The unusual relationship between this baby hippo and the ancient tortoise amazed people the world over and has featured in most countries on television and in news papers.

Owen and Mzee continue to spend their days together in the pond, feeding and patrolling. Owen nudges Mzee to come for walks, and Mzee sometimes even follows Owen. Hundreds of people have witnessed this incredible spectacle first hand at Haller Park which is open every day to the public. Owen will eventually be moved to a bigger pond in Haller Park were he can socialize with other hippos.