Accessibility links
Computer-Recycling Business Booms RetroBox, a fast-growing Ohio company, buys discarded computers that it recycles and rebuilds. The goal is to keep the machines out of landfills -- the U.S. government alone throws away 10,000 computers a week.

RetroBox, a fast-growing Ohio company, buys discarded computers that it recycles and rebuilds. The goal is to keep the machines out of landfills — the U.S. government alone throws away 10,000 computers a week. 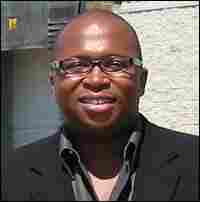 Collapsing stacks of old computers, piles of printers, terrifying tangles of keyboards and mice and modems--this could be happening somewhere in your company or even in your basement. We move quickly through new generations of computers and the old stuff. So where should it all go? NPR's Noah Adams reports on RetroBox, a recycling company in Columbus, Ohio.

A computer has a three-year life span, and you'll find an aging one on practically every desk these days. Just the federal government alone is getting rid of 10,000 computers every week. The new industry to deal with all this is called e-waste. RetroBox got in early, and they've been expanding since 1997. Eighty people work at the processing center just off the interstate outside Columbus. You could unload eight tractor trailer trucks here at the same time.

ADAMS: Stamp Corbin is the founder and CEO of RetroBox. What he is really selling, and to big companies, is reassurance. Their stuff that comes here won't be shipped off to China, won't go to a landfill.

Mr. CORBIN: Basically, we know exactly what happens to every single component that leaves our facility. Anything that's hazardous waste, we can provide an audit trail all the way to its final resting place. And that's not in a landfill.

Unidentified Man: How you doing, sir?

Mr. JAY WOODALL (Director of Operations): Here we've got Mac monitors. We have some Dell CPUs, IBMs, Compaq. I mean, just virtually all the major manufacturers come through here at one point in time.

ADAMS: Director of operations for RetroBox, Jay Woodall. Companies call him, and he rescues them. He tells me about his biggest mission, a warehouse full of stuff, thousands of components. He flew a team in and got everything packed on trucks.

Mr. WOODALL: We basically landed there on a Sunday night, a Monday morning, and we had the entire warehouse cleared out within 96 hours.

ADAMS: The companies pay RetroBox to recycle their computers. If any can be fixed up and resold, that's good, too, and the proceeds are shared. When Jay Woodall gets the estimate of how many computers a company is sending, he figures the number is low, and here's why.

Mr. WOODALL: You're sitting at your desk in a company, and somebody comes along with a cart, and they've got all these old computers on it, you say, `Hey, what are you doing?' `Well, we are getting rid of our old computers because the new ones are coming in.' `Oh, yeah. I got an extra one around the corner that's been back here for an extra three years.' And they pile that on the cart, too, in addition to the one on their desk that wasn't in the original piece count. We call it closet fill.

ADAMS: The e-waste arrives from all the states and overseas, and who knows what else could be in the boxes: coffeemakers, a microwave, even a sink.

Mr. WOODALL: We also got in a shipment one time--a misshipment--of ladies' lingerie from Victoria's Secret, which basically ruined from my productivity from my organization for about 20 minutes while all the guys went through the box.

Mr. WOODALL: OK. Now we're entering into our--what we call our integration center, which actually is where all the testing takes place.

ADAMS: A technician's job in this room: open the computer, check things out. If it's a fairly recent operating system, they wipe any data from the hard drive and send the unit along to be refurbished. If the machine is just too old, it gets deconstructed for recycling, a harvest of lead, copper, industrial gold and plastic. And just to be sure, the old hard drives are erased and then smashed.

ADAMS: Compressed air in a paint booth, blowing away a few years' dust as a refreshed computer gets close to shipment. RetroBox sells these items on their Web site. You could even buy a computer that came from your own office.

Mr. WOODALL: Company XYZ has 400 laptops that come in, we will offer the client the ability to place those items on a closed portion of the Web site. Those sales go very well. We even get really bizarre calls like people will call in a serial number and say, `I want that system. That was the one that was on my desk.'

ADAMS: Jay Woodall of RetroBox in Columbus, Ohio. The company's just opened another facility in Phoenix, and Francis O'Brien understands why. She works for the Gartner Research firm, watching information technology around the world.

Ms. FRANCIS O'BRIEN (Gartner Research): We believe that over the next three years, over 400 million PCs will be retired worldwide.

ADAMS: And she says the business of electronic recycling is just getting started.

Ms. O'BRIEN: Most of the focus has been on PCs--Right?--because there's so many of them. But now it's really everything else. It's cell phones, it's PDAs. You know, look at cars now, right? Cars have all these global positioning systems in it and, you know, a whole host of other electronics. Now at some point, that could be considered e-waste, too.