Don Roos, the director of The Opposite of Sex, directs a film with 10 stories and intertwining characters. Happy Endings stars Lisa Kudrow, Laura Dern, Maggie Gyllenhaal, Jason Ritter and others. 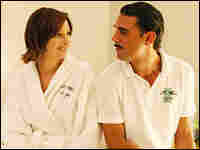 Don Roos, the director of the movie "The Opposite of Sex," makes what are usually called ensemble comedies. They weave several stories together rather than following one story line to a conclusion. Roos has now made a movie called "Happy Endings." And despite that title, Bob Mondello says this comedy has dark undertones.

Mamie is a mess, and so is her stepbrother, Charley. He got her pregnant when their families first moved in together. Their folks sent her off to have an abortion. And though she tells everyone she did, she actually had the baby and gave it up for adoption. Then one day, out of the blue, she gets a call from a guy named Nicky, who tells her he'll reunite her with her now 18-year-old son if...

Mr. JESSE BRADFORD: (As Nicky) ...you let me film the whole thing, you finding your kid. See, I need to get into AFI. You know, do you know AFI? AFI is the American Film Institute. So they give out, like, you know, one scholarship a year, and it helps if you're black or lesbo or whatever, and I'm not. So I need a killer, killer film, a documentary like you finding your kid.

Ms. LISA KUDROW: (As Mamie) I don't believe this.

Mr. BRADFORD: (As Nicky) Yeah, OK, yeah. We would have to fake parts of it. Sure, we would, but the emotion would be true. Your guilt and stuff, that would be our selling point. I'm really glad that you're not a dog. I mean, you know, even if the story is great, people want to look at good-looking people, you know, all things being equal. So huge relief when I saw you, you know? And I can make you look better. That's lighting.

MONDELLO: Nicky's something less than a class act. So is Charley, the stepbrother turned father, who has since realized he's gay and has developed his own child issues, convincing himself on rather slim evidence that his partner is the father of a child being raised by their lesbian best friends.

Mr. STEVE COOGAN: (As Charley) Fact, three and a half years ago, you donated sperm to their gyno.

Mr. COOGAN: (As Charley) Fact, after three months of trying, Pam said it wasn't working and they were going to get a donor from a sperm bank.

Unidentified Actor: Yes. They were upset about it, remember? Pam was a wreck.

Mr. COOGAN: (As Charley) Fact, six months later, they're pregnant. Fact, sperm can be kept viable for up to 12 years if frozen correctly, according to this Web site I found.

MONDELLO: When Charley's not practicing voodoo genealogy and emotional blackmail, he runs a restaurant, where a teen closet case, who has a crush on him, meets a teen vixen, who sleeps first with him and then with his father and isn't sure which of them to tell she thinks she's pregnant. And trust me, I'm barely scratching the surface of the complications that writer-director Don Roos has cooked up around his three stories of baby making. You might think of this film as sort of the opposite of the results of sex, as it focuses on characters who really don't get this thing called parenting. They are mostly off-putting when you meet them, though they're played by such ingratiating folks as Lisa Kudrow, Maggie Gyllenhaal and John Ritter's son Jason. But as in "The Opposite of Sex," characters with even the worst of intentions somehow worm their way past your defenses. The director helps them with everything from off-beat music cues to silent film title cards. And if he can't sustain the laughs for a full 128 minutes, a almost suicidal length for a comedy, credit him at least with asking audiences to deal with the unconventional in "Happy Endings," including endings that are happy in only the loosest sense. I'm Bob Mondello.

MICHELE NORRIS (Host): You're listening to ALL THINGS CONSIDERED from NPR News.