Accessibility links
The Patriot Act: Alleged Abuses of the Law The Justice Department says there have been no reported abuses of the Patriot Act. But critics say that because the act mandates secrecy about many of its uses, Americans may never know whether their privacy has been violated. Here's a look at cases used to illustrate alleged abuses of the law.

The Patriot Act: Alleged Abuses of the Law

The Patriot Act: Alleged Abuses of the Law 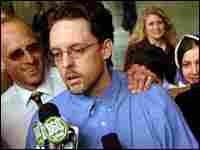 Brandon Mayfield speaks to the media following his release from custody, May 20, 2004. Mayfield was held for two weeks as a "material witness," after the FBI erroneously matched his fingerprint to one found near the site of the 2004 Madrid bombings. Bruce Ely/The Oregonian/Corbis hide caption

Critics of the USA Patriot Act say the law has made it too easy for law enforcement to spy on people. They contend that, by easing restrictions on the use of surveillance tools once reserved for foreign-intelligence investigations, the law cuts too deeply into personal liberties and privacy rights.

The Justice Department dismisses these objections, saying there have been no reported abuses of the act and no substantiated claims that civil rights have been violated.

The Patriot Act greatly expanded the government's surveillance powers. But some opponents worry that could curtail civil liberties. Read an analysis of the act's most controversial provisions.

But civil liberties groups say that because the act mandates secrecy about many of its uses, Americans may never know whether their privacy has been violated by law-enforcement investigators relying on the act's powers.

Both sides cite anecdotes to bolster their arguments. Their competing examples miss a larger point: Many of the act's most controversial statutes are not used to arrest people. Instead, they limit or expand investigative tools that law enforcement uses to prosecute crimes defined by other laws.

Among the cases used to illustrate alleged abuses of the law:

In May 2004, Brandon Mayfield, an attorney in Portland, Ore., and a convert to Islam, was arrested in connection with the March 11, 2004, Madrid bombings that left 191 people dead. He was held for two weeks as a "material witness."

Mayfield was released after the FBI admitted his fingerprint had been mistakenly matched with one found at the scene of the Madrid attacks. The FBI has described this as a rare mismatch of a fingerprint that reveals little about the Patriot Act.

But the government has admitted to Mayfield that his home was searched secretly under a special court order authorized for intelligence purposes. The American Civil Liberties Union says that the search amounts to an abuse of the Patriot Act: It was conducted as though it were an intelligence search, when in fact agents were looking for evidence to use in a criminal prosecution.

Mayfield is suing the Justice Department for violating his civil liberties, saying he was singled out because he is a Muslim. Critics of the Patriot Act say Mayfield's case underscores the law's potential for abuse.

"National security letters" are a type of administrative subpoena that can be used by the FBI in intelligence investigations without judicial approval. It allows FBI agents to seize financial records, communications information and other personal documents, by drafting a letter stating that the information being sought is relevant to a national security investigation. Section 505 of the Patriot Act expanded the government's authority to use the procedure.

On an unknown date, the government used this authority to obtain records from an Internet service provider. In April 2004, the ACLU sued on behalf of the service provider, arguing that the seizure violated the First and Fourth Amendments. Last September, a federal judge in New York upheld the challenge. The judge found that the way the letters are executed is coercive, and recipients are not allowed to challenge the orders.

Many scholars say the case has little to do with the Patriot Act, since the judge's ruling affected an earlier communications privacy law that was simply expanded by the Patriot Act. The decision is currently on appeal.

'Expert Advice and Assistance' to Terrorists

In February 2003, Sami al-Hussayen, a student at the University of Idaho, was arrested and prosecuted under section 805 of the Patriot Act, which makes it a crime to lend "expert advice and assistance" to a terrorist organization.

Al-Hussayen was charged because of his work as a Web master for the Islamic Assembly of North America. His duties included supplying Web links to speeches by prominent Muslim scholars. Some of those links advocated criminal activity and suicide operations.

His attorney argued that al-Hussayen could not be held responsible for the content of the material to which he provided links. Critics of the "expert advice and assistance" provision of the Patriot Act have argued that it could be used to prosecute newspapers for providing links to Osama bin Laden's latest taped statements.

The jury found al-Hussayen not guilty on all the terrorism charges. But he agreed to be deported rather than contest separate immigration charges pending against him.

The ACLU has also questioned the Justice Department's use of Patriot Act powers to prosecute crimes other than terrorism.

For example, the Justice Department prosecuted a 20-year-old woman from Orange County, Calif., who planted threatening notes aboard a cruise ship on which she was traveling with her family. The woman said she made the threats to force the ship to return to port, so that she could be reunited with her boyfriend. She was sentenced to two years in prison for violating a section of the Patriot Act that criminalizes threats against mass-transportation systems.

The Justice Department is also prosecuting David Banach of New Jersey for shining a hand-held laser pointer at an aircraft. Even though there's no evidence he was engaged in terrorism, Banach faces federal charges under the Patriot Act for interfering with pilots and lying to the FBI.