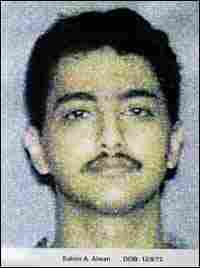 An FBI handout shows Sahim Alwan, one of six Yemeni-Americans from Lackawanna, NY, who pleaded guilty in 2003 to training with a terrorist organization. FBI/Reuters/Corbis hide caption

The Justice Department credits the Patriot Act with expanding the government's arsenal of investigative tools, helping it crack several cases.

Law-enforcement officials say the act has greatly enhanced information sharing within the FBI, and with the intelligence community at large. The law helped erode the legal and bureaucratic "wall" that used to separate the intelligence and criminal sides of an investigation. Federal authorities say this wall is at least partly responsible for FBI and CIA intelligence failures prior to the attacks of Sept. 11.

Critics say the Patriot Act made it easier to spy on people. But the law's supporters praise it for correcting what they say were pointless double standards in investigative rules.

A look at some of the Patriot Act success stories the government cites:

The Justice Department says the Patriot Act facilitated its investigation of the "Lackawanna Six," a group of Yemeni-Americans who traveled to Afghanistan in 2001 to receive training at an al Qaeda-affiliated camp near Kandahar. In the summer of 2001, the FBI received an anonymous letter indicating that the six might be involved in criminal activity and associated with foreign terrorism.

Under previous law, the government says the FBI would have been compelled to pursue two separate investigations: one looking into possible drug crimes, the other investigating intelligence related to terrorist threats. The Patriot Act took down the "wall" between these two types of investigations, allowing case-sensitive information to be shared between the two groups, according to investigators.

Five of the "Lackawanna Six" pleaded guilty to providing material support to al Qaeda, and the sixth pleaded guilty to conducting unlawful transactions with al Qaeda. In 2003, they were sentenced to prison terms ranging from seven to 10 years.

The government characterized the group as a "sleeper cell," but some critics argue that there's no evidence the men posed an imminent threat. Defense attorneys claim the federal government coerced their clients into pleading guilty by implicitly threatening them with indefinite detention.

In a case similar to that of the "Lackawanna Six," members of "the Portland Seven" terror cell attempted to travel to Afghanistan in 2001 to join the Taliban in fighting the United States.

While investigating the case, law-enforcement agents learned that one member, Jeffrey Battle, had previously contemplated attacking Jewish schools or synagogues and had begun casing buildings to select a target for such an attack. Authorities suspected that a number of individuals were involved in the Afghanistan conspiracy, but only had sufficient evidence to arrest Battle.

Prosecutors say sections 218 and 504 of the Patriot Act allowed the FBI to conduct secret surveillance of Battle, in order to ensure that he was not going to go ahead with any terror attacks.

Prosecutors say they were also able to learn the names of the other members of the group. Ultimately, they were able to collect sufficient evidence to charge all seven defendants. Six of the defendants were taken into custody, receiving prison sentences ranging from three to 18 years. The seventh defendant was never arrested; prosecutors said he was killed during a firefight in Pakistan in October 2003.

Section 211 of the Patriot Act eliminated a potential loophole for terrorists by clarifying that cable companies -- typically protected under the federal Cable Act -- are also subject to federal wiretap and electronic communications statutes. The section aims to ensure that terrorists and other criminals are not exempt from investigations simply because they choose cable companies as their providers for Internet and other communications services.

The Justice Department says Section 211 enabled investigators to obtain information that was crucial to identifying an individual who had sent over 200 threatening letters, laced with white powder, to various government agencies, businesses and individuals in Louisiana. These letters paralyzed the town of Lafayette, La., for several days in 2002, as law-enforcement agencies with a limited number of hazardous material units frantically tried to respond to numerous requests for assistance.

The government says that as a result of information provided by a cable company under Section 211, the perpetrator was eventually arrested, convicted and sentenced to a prison term of 30 years.

Section 373 of the Patriot Act makes it illegal to run an unlicensed foreign-money transmittal business. Prosecutors say they used this provision to bring charges against Yehuda Abraham, an unlicensed money transmitter, for his role in helping to arrange the transfer of funds in a thwarted arms sale.

The Justice Department says Abraham's services were used by Hermant Lakhani, a British arms dealer. Lakhani was arrested in August 2003, after attempting to complete the sale of a shoulder-fired missile to a government cooperating witness who was posing as a member of a terrorist group.

The Justice Department says the Patriot Act allowed prosecutors to quickly bring a case against Abraham, bypassing the issues that have typically plagued similar cases in the past. Abraham pleaded guilty to running an illegal money-transfer company in March 2004.

Expanded Use of Pen/Trap Devices

Section 216 of the Patriot Act modified existing legislation to indicate that pen/trap devices -- typically used to track the phone numbers of incoming and outgoing calls on a telephone line -- could be used to apply to the full range of communications media, including Internet and e-mail records.

According to the Justice Department, this new provision was critical in disrupting a plot to use cocaine to purchase Soviet bloc weapons for the United Self-Defense Forces of Colombia, which has been designated as a terrorist organization by the State Department.

Investigators used pen/trap devices, as well as a wire intercept, to gather evidence against several of the targets. Four individuals were charged with conspiring to provide material support to a foreign terrorist organization, as well as conspiring to distribute five kilograms or more of cocaine.

Section 212 of the Patriot Act allows an Internet service provider to disclose electronic communications directly to law enforcement, without waiting for a court order, if there's an immediate danger of physical injury. The Justice Department credits the provision with allowing it to apprehend Jared Bjarnason in April 2004.

Bjarnason had sent an e-mail to the El Paso Islamic Center in Texas, threatening to burn the center's mosque to the ground if hostages in Iraq were not freed within three days. The government says FBI agents used Section 212 to investigate the case, allowing them to quickly identify and arrest Bjarnason before he could harm the mosque.