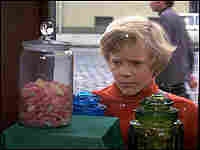 Peter Ostrum as Charlie Bucket in the 1971 film 'Willy Wonka and the Chocolate Factory.' hide caption 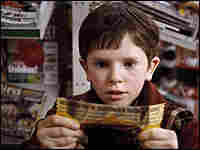 Freddie Highmore as Charlie in the new film. hide caption 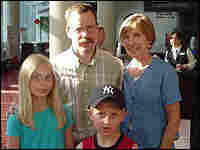 One of the summer's most eagerly awaited films has arrived in theaters across the country. Roald Dahl's beloved children's tale, Charlie and the Chocolate Factory, was first brought to the silver screen by director Mel Stuart in 1971. Stuart called his version Willy Wonka and the Chocolate Factory, after the novel's quirky, enigmatic candymaker, immortalized in plum-colored velvet by Gene Wilder.

This time the director is Tim Burton and Willy Wonka is Johnny Depp, with all the quirky surrealism such a combination implies. Young Charlie Bucket is portrayed by a British lad named Freddie Highmore.

But the Charlie of 1971 was Peter Ostrum, then of Cleveland, Ohio. He never made another film. Though his childhood was preserved on screen, he's all grown up, with a wife and kids. And he was kind enough to let Jesse Baker tag along as they went to see the new movie.

"Peter Ostrum remains small in frame," Baker notes. "His cheeks are rosy and his blue eyes look like they could still well up the way Charlie Bucket's did in the scene where he told his mother all hope was lost and he wasn't ever going to find a golden ticket."

'Never Wanted to Be an Actor'

But Ostrum does't like to draw attention to himself any more. He's a large animal veterinarian in upstate New York now. His wife Loretta says it took him years to tell anyone in their small town about Willy Wonka. And he only menioned it to her when she was about to meet his mother.

And his thoughts on the new film?

"Julie Dawn Cole, who played Veruca in the original film, had a wonderful analogy that I'll use," he says. "It's sort of like going back to a house that you once lived in that's been redecorated."

The audio of this story incorrectly identifies the actor who plays the Oompa-Loompas. His name is Deep Roy.