Accessibility links
'Foreign Babes' on TV in Beijing Melodrama is essential to any American soap opera, and the same holds true for their Chinese counterparts. Rachel DeWoskin talks about her role as an aggressive Westerner in a Chinese daytime drama, and her new book, Foreign Babes in Beijing.

Melodrama is essential to any American soap opera, and the same holds true for their Chinese counterparts. Rachel DeWoskin talks about her role as an aggressive Westerner in a Chinese daytime drama, and her new book, Foreign Babes in Beijing.

Fresh out of college, Rachel DeWoskin went to China in 1994 in the hope of finding something more interesting to do than the banking and consulting jobs her classmates were taking.

(Soundbite of song in Chinese)

LUDDEN: She found it as the conniving Western star of a Chinese soap opera.

(Soundbite of "Foreign Babes in Beijing")

LUDDEN: DeWoskin became famous throughout China. Her new book about the experience is called "Foreign Babes in Beijing: Behind the Scenes of a New China." Rachel DeWoskin joins us now from New York.

Ms. RACHEL DeWOSKIN (Actress; Author, "Foreign Babes in Beijing): Hi. Thanks for having me.

LUDDEN: So the title of the soap opera was "Foreign Babes in Beijing." Is that right?

Ms. DeWOSKIN: You know, the title sums it up. The plot was pretty standard TV fare. There was a good girl and a bad girl...

LUDDEN: You were the bad one.

Ms. DeWOSKIN: ...in love with China and Chinese men. I was the bad girl.

LUDDEN: In love with a Chinese man. And you were supposed to represent this Western babe. But now it seems like you were representing what Chinese producers thought a Western babe should be.

Ms. DeWOSKIN: Exactly. My life in Beijing was funny. I had a dual perspective. On the one hand, I was a `foreign babe in Beijing,' if you will, and on the other I was the playing the Chinese idea of my life on TV.

LUDDEN: One of the opening scenes has the four of you--the good girl, bad girl and your two Chinese men--kind of holding hands and romping across a square. Give me a flavor of some of the direction you took there when taping this?

Ms. DeWOSKIN: The direction involved a lot of (foreign language spoken) media, which means do it with a little bit more hot emotions, meaning do it kind of a la Muppet. So whenever I acted--I wasn't a very good actor, incidentally, as I'm sure you deduce from watching...

LUDDEN: Right. This is all by accident. We should have mentioned you got in here completely accidentally. You're not an actress.

Ms. DeWOSKIN: It was very random. Foreigners are cast, you know, at random on Chinese TV frequently. And I was just at a party, and some guy said, you know, `You're white. Do you want to be in my friend's soap opera?' So I wasn't exactly talented at the medium. And having said that, I tried sometimes for a little bit of understatement, but that wasn't popular with the director. So most of the scenes are grotesquely exaggerated, Muppetlike scenes.

LUDDEN: Now this is the mid-90s, and China was fast emerging as an economic power. Tell me about how did Beijing change in your--you were there five-plus years.

Ms. DeWOSKIN: Beijing was transforming when I was there at a breakneck speed. And it was really quite an interesting and exciting time to be in Beijing. You know, Beijing is a city like New York in the sense that everybody who's there is self-consciously there. People are thinking about the city, and the city is thinking about itself. And you can tell when people are walking down the street that they're thinking, `I'm in Beijing, and this is the middle of the Middle Kingdom.' People have a very proud feeling about Beijing. I had that, too, even though I was an outsider.

And Beijing was becoming glitzy. You know, there were tall skyscrapers with traditional characteristics, like pagodas on top. And there was a real sense that the old regime in terms of lifestyles, not so much maybe in terms of politics, was over and that the government was going to do politics the old way, but people could live their lives any way they wanted. And so there was really a lot of enthusiasm and excitement about what that meant.

LUDDEN: And what, in your mind, do you think this soap opera, "Foreign Babes in Beijing," meant? How did it play into this?

Ms. DeWOSKIN: Well, "Foreign Babes in Beijing" was an apt, if tacky, example of China's very conflicted feelings about the West. And I think, you know, the foreign babes ourselves weren't so vastly different from any Western product. We were sexy and tempting, if somewhat corrupting. I mean, Deng Xiaoping put it succinctly when he said, `If you open a door, some flies will come in.' And I think...

LUDDEN: You were the fly?

Ms. DeWOSKIN: No, I think we were flies in a way. And at the same time, after the show ran, teen-age girls and their grandmothers followed me through markets buying whatever Jiexi bought, whether it was fish paste or fake Prada wallets or extension cords. And they did that because they wanted to be liberated, they wanted to be feminists, they wanted to get what they wanted in the way that Jiexi did. And she loved with abandon, and, as the trailer of the show puts it, `she dared to love, dared to hate.' And that was very sexy, a kind of unrepressed expression of selfhood and emotion.

LUDDEN: Hmm. Now during this time, this opening to the West, you were also in Beijing when NATO bombed the Chinese Embassy in Serbia.

LUDDEN: And that caused quite a backlash.

Ms. DeWOSKIN: That was a very difficult time, and, in fact, it was the most painful experience I had living in Beijing. For one thing, it gave me a real sense of how volatile my life there was and the relationship, really, between China and the West was, China and the US. And it also gave me perspective on my own perspective, which was, in some ways, very limited. There's a fabulous Chinese expression, which I start the book with: (Chinese spoken), which means `A frog in the bottom of a well.' And it's about the limiting nature of inside perspective. So if you're the frog in the well, you think you know how big heaven is, but you look up and you can only see a circle of the sky.

And, you know, when NATO bombed the Belgrade embassy, I listened to the reports on the Western news and took them at face value. And my Chinese friends, who were sophisticated consumers of moral drama, having imbibed propaganda from birth, said to me, `Are you crazy? This is a political apology. The West did this on purpose.' You know, `Look at the Chinese news reports. Look at the reaction on the streets. The truth is somewhat more complicated than you're making it out to be.' But I felt very defensive at the time, and we had a lot of really hard conversations about it. There were protests outside the US Embassy; people threw paintballs and Molotov cocktails, and I felt personally insulted.

LUDDEN: How long did "Foreign Babes in Beijing" air?

Ms. DeWOSKIN: "Foreign Babes in Beijing" aired for the first time in 1995, and then it reran for five years.

LUDDEN: So China's moved on?

Ms. DeWOSKIN: China's moved on. I think in Beijing, people are much more used to their foreign residents. And that means that there's slightly less ecstasy and interest in us, but it also means more comradery and allegiance and familiarity with us.

LUDDEN: Now your bio in this book cover says that, among other things, you write Chinese rap.

LUDDEN: Can you give us a sample?

Ms. DeWOSKIN: My Chinese rap I mostly wrote in drunken and overly expressive moments. My main interest in Chinese rap was in translating the lyrics of real musicians. My own rap is very ridiculous. I'll be happy to rap a line if you'd like.

LUDDEN: And that means?

Ms. DeWOSKIN: Which translates roughly as, `You can tell I'm cute, but what you can't tell is that I'm an unapologetic feminist.'

LUDDEN: A good comeback when you're on the streets there maybe.

LUDDEN: Rachel DeWoskin is the author of "Foreign Babes in Beijing: Behind the Scenes of a New China." 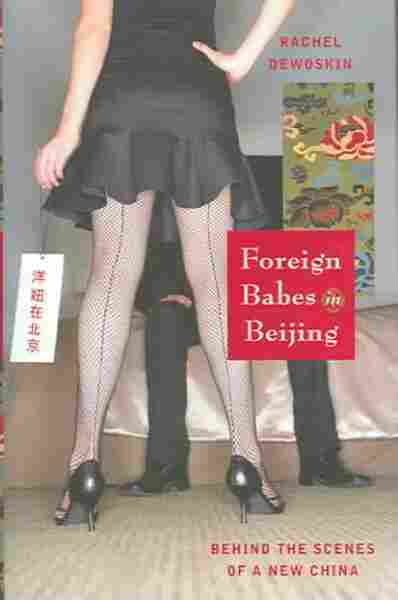 Behind The Scenes Of A New China