Accessibility links
New Law to Help Sufferers of Gluten Allergy Some people cannot live without wheat products while others have to. A component of wheat called gluten has been discovered to trigger allergies, even in small amounts. The federal government will require manufacturers to list wheat among other allergens in food packaging.

Some people cannot live without wheat products while others have to. A component of wheat called gluten has been discovered to trigger allergies, even in small amounts. The federal government will require manufacturers to list wheat among other allergens in food packaging. 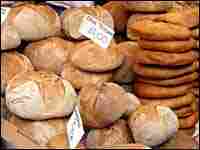 Now our consumer health segment. Life without beer and pizza. These are just a few of the favorites that people with a wheat sensitivity do without. In some cases, the grain causes an allergic reaction. For others, a component of wheat called gluten triggers the onset of a genetic disease. An increase in the diagnosis rate of the disorder has led to new government food labeling requirements. NPR's Allison Aubrey reports.

People have been eating wheat for 6,000 years. It's so common in the American diet that avoiding it often means not eating out, especially at a bagel shop.

Ms. ALLISON HERWITT: Well, luckily I brought my own breakfast because I know that there's probably nothing that I could eat here.

AUBREY: That's Allison Herwitt. She always brings her own food to business luncheons, dinner parties. This way she's certain she won't ingest a crumb of wheat gluten. The substance works like a poison in her body, a fact it took her years to figure out.

Ms. HERWITT: For 11 years off and on, I was suffering from constant diarrhea to constipation to constantly being fatigued, and I would just go from one doctor to another and I was just misdiagnosed.

AUBREY: Finally a specialist screened her for celiac disease, an immune system disorder. It's similar to a wheat allergy, but instead of leading to an immediate allergic reaction, the gluten found in wheat, rye and barley leads to chronic inflammation of the intestines. Painful symptoms come and go.

Ms. HERWITT: The way that I always understood food allergies is if you eat something, immediately, you know, you can't breathe or something, and so I never thought what my symptoms were could be related to the food that I ate. Eliminating gluten from diet made me a perfectly healthy person.

AUBREY: Herwitt's story sounds familiar to Dr. Peter Green. He's a gastroenterologist at Columbia University. He says five years ago, celiac disease was considered very rare--fewer than 20,000 Americans had been diagnosed--but this is changing.

Dr. PETER GREEN (Columbia University): The rate of diagnosis is doubling about every two years in this country.

AUBREY: It's not that the condition is becoming more prevalent. It's just that doctors are screening for it more often. Recent studies suggest that about one in a hundred people carry the genes that put them at risk for celiac disease.

Dr. GREEN: Even though it's still perceived as being fairly rare, the condition is being diagnosed, and I think that leads to a demand for improved quality and quantity of gluten-free foods.

AUBREY: Eating a gluten-free diet is a lot more complicated than just avoiding wheat. Food manufacturers use gluten as a sort of glue to bind together various ingredients of processed foods. This means it turns up in everything from tomato sauce to ice cream to salad dressing. Allison Herwitt says it's a sort of hidden ingredient often labeled as just `natural flavoring.'

Ms. HERWITT: Unless I have extra time to find out, you know, what is in that natural, artificial flavor, then I just err on the side of being safe and I don't eat it.

AUBREY: But life is about to get a little easier for people who can't eat wheat and gluten. A new federal law that takes effect in January requires manufacturers to list wheat and seven other common allergens on food labels. Allison Herwitt is working with a celiac advocacy group to push for more. The latest effort is to have the federal government establish an acceptable level for traces of gluten in food.

Ms. HERWITT: It's the first step to getting a standard in the United States for what would be gluten free.

AUBREY: Last Friday, advisers to the Food and Drug Administration met and came one step closer to establishing that standard. Once it's finalized, people with celiac disease will be able to trust a label that claims a product is gluten free. Allison Aubrey, NPR News, Washington.