Accessibility links
Capturing the Elusive 'Breath of a Wok' Melissa Block and food writer Grace Young trek through New York's Chinatown in search of wok hay, the magical essence released by a good wok when it's properly cared for and heated just right.

Listen
Capturing the Elusive 'Breath of a Wok' 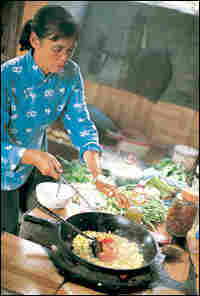 • The best wok for a residential Western-style stove is a 14-inch flat-bottomed carbon-steel wok. If using a wok with metal handles, be sure to use pot holders when touching the handles.

• Make sure the ingredients are thoroughly prepped and uniformly sliced to ensure even cooking.

• Make sure vegetables are dry, to prevent stir-fries from becoming soggy. Allow vegetables to air-dry in a colander for several hours, or use a salad spinner to remove excess water.

• Measure and group all ingredients in order of their use in the recipe beside the stove for easy access.

• The wok must be hot before the oil is added. A carbon-steel or Chinese-made cast-iron wok must be heated on high heat until a faint wisp of smoke rises from the pan. Another test is to flick a bead of water into the pan; if it vaporizes within a second or two, the pan is hot enough.

• When using a powerful stove, I heat the wok until a faint wisp of smoke rises. I quickly turn off the heat, swirl in the oil, and then return the heat to high. This prevents the oil from smoking.

• Add the oil by swirling it into the wok down the sides and then rotate the pan, allowing the oil to spread across the bottom.

• Do not stir-fry more than 12 ounces of meat, 16 ounces (1 pound) of chicken, or 4 cups of vegetables in a 14-inch wok. Too many ingredients in a wok lowers the wok's temperature, causing ingredients to steam rather than stir-fry.

• Alternate between jerking the wok back and forth on the burner and using a metal spatula to keep the ingredients in constant motion.

• Swirl sauce mixtures or any liquids into the wok down the sides to prevent the temperature of the wok from dropping. 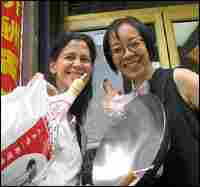 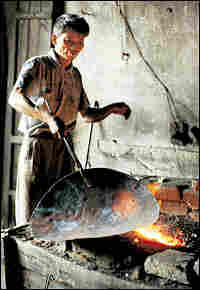 A blacksmith in Gao Tian village, in Guangxi province, makes a wok at his forge. Alan Richardson hide caption 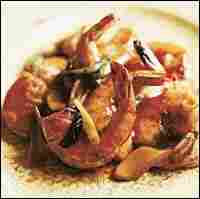 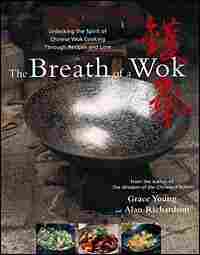 In her latest book, The Breath of a Wok, Young writes about the magical essence that is released by a good wok when it is properly cared for and heated to the right temperature, and when the freshest ingredients are used.

Young says a Chinese cast-iron wok should have a clear, bell-like tone when banged on the floor. And avoid non-stick woks -- the food won't taste the same, she says.

(Serves 4 as part of a multi-course meal.)

The first time I seasoned a wok without problems, I used this recipe, which I learned at the Hung Chong wok shop in New York's Chinatown. Make sure the chives are very dry after washing to prevent the oil from spattering. One bunch of scallions cut into 3-inch pieces and 1/2 cup of sliced ginger can be substituted for the chives in this recipe. Scallions and ginger are said to remove the wok's metallic taste. Smell the wok after seasoning -- the metal will have a strong fragrance from the aromatics.

1. Wash the inside and outside of the wok with hot water, using a stainless-steel scrubber and liquid dishwashing soap. Rinse with hot water. Dry the wok with paper towels, then place over low heat 1 to 2 minutes until the pan is totally dry. Cut the chives into 2-inch pieces.

2. Open the window and turn the exhaust fan on high. Heat the wok over high heat until a bead of water vaporizes within 1 to 2 seconds of contact. Swirl in the oil and add the chives. Reduce the heat to medium and stir-fry 15 minutes, using a spatula to push the mixture up the sides of the wok to the edge. If the mixture becomes dry, add an additional tablespoon of oil. Remove from the heat. Cool. Discard the chives.

3. Wash the wok with hot water and a soft sponge. Dry over low heat 1 to 2 minutes. The wok is seasoned and ready for cooking.

(Serves 4 as part of a multi-course meal.)

Cookbook author and teacher Jean Yueh advises that the shrimp can be made ahead, transferred to a platter, and served at room temperature. Yueh tells me the shrimp are even better the next day after they absorb the sweet and savory Shanghai-style sauce.

3 tablespoons sugar, or to taste

1. Using kitchen shears, cut through the shrimp shells two-thirds of the length down the back of the shrimp. Remove the legs and devein the shrimp, leaving the shells and tails on. Rinse the unpeeled shrimp, drain and set on several sheets of paper towels. With more paper towels, pat the shrimp dry. In a small bowl combine the soy sauce and vinegar.

2. Heat a 14-inch flat-bottomed wok over high heat until a bead of water vaporizes within 1 to 2 seconds of contact. Swirl in the vegetable oil, add the ginger and scallions, and stir-fry 30 seconds or until aromatic. Add the shrimp and stir-fry 30 seconds. Add the sherry and stir-fry a few seconds. Swirl in the soy sauce mixture and sprinkle in the sugar. Stir-fry the shrimp 1 to 2 minutes or until the sauce is distributed and the shrimp are just cooked. Remove from the heat. Stir in the sesame oil if desired. Serve immediately or at room temperature.

The Chinese Restaurant in America June 19, 2005
Asian-Inspired Cooking with Tyler Florence May 7, 2005

GraceYoung.com: 'Breath of a Wok' 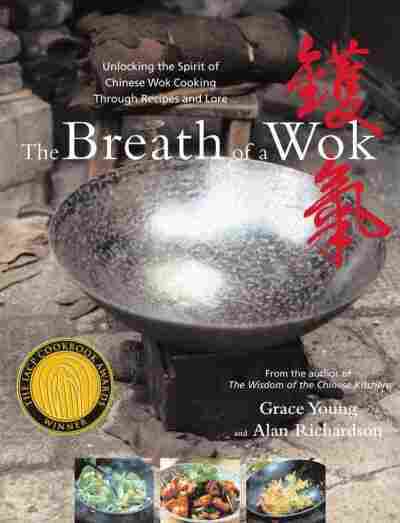 The Breath of a Wok

Unlocking the Spirit of Chinese Wok Cooking Through Recipes and Lore

by Grace Young and Alan Richardson