Accessibility links
Pitch Black Afro: Hip-Hop by Way of South Africa Rapper Pitch Black Afro's debut CD has sold a reported 50,000 copies in South Africa, a country where much of the population can rarely afford to buy a CD. Sean Cole reports from Johannesburg.

Hear Songs from the Album

Pitch Black Afro's debut CD has sold a reported 50,000 copies in South Africa. It's a modest number by American standards, but not in a country where much of the population can rarely afford to buy a CD. 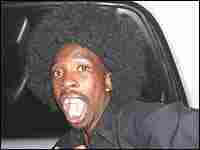 Pitch Black Afro's mane, for now, is in name only: That's a wig on his head. Sean Cole hide caption

The album, called Styling Gel, has a sound that will be familiar to most fans of hip-hop, and the lyrics have some of the same boastful posturing found in many American rap songs. But the languages used are Zulu and a slangy mixture of different languages called totsi taal. Though his rhymes are homegrown, Pitch Black Afro does cite stateside rapper Redman as an influence.

So far, Pitch Black Afro, who grew up in the township of Soweto in the days of apartheid, has gained more in girls than in cash from his success. But he shows no signs of slowing down: A second album is due next year. Sean Cole talks with the rapper, whose real name is Thulani Ngcobo, in Johannesburg.