Accessibility links
Dogs, Magic and Rock and Roll NPR business correspondent Scott Horsley reflects on reading about sled dogs with his mom in Alaska and a malodorous dog with school kids in San Diego.

Dogs, Magic and Rock and Roll

Dogs, Magic and Rock and Roll 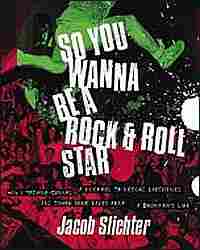 Last summer, Scott Horsley passed the time on the campaign trail reading about rock bus tours in Jacob Slichter's So You Want to be a Rock and Roll Star. hide caption

Whether it's the indulgent hours or lighter genres, summer reading is characterized by its reverie. In My Summer Books, NPR hosts and reporters share their memories of summer reading and books. Today, NPR business correspondent, Scott Horsley.

What do you look for when you pick a book to bring on vacation?

When I travel, I like to read about the place I'm visiting. Many years ago, I took a book called Tracks Across Alaska on a camping trip to Denali National Park. We wound up spending a lot of time in the tent, taking refuge from the rain and mosquitoes, and I would read aloud to my mom from Alastair Scott's wonderful tale of a novice dogsledder, mushing towards Nome. (It never really got dark, so one could read late into the night.)

About 10 years later, we took another trip to Alaska, this time aboard the Universe Explorer, sailing up the Inside Passage. I was really enjoying Jonathan Raban's account of a similar trip, Passage to Juneau, until I got to page 408: "Five people were dead, 71 injured, two of them critically. Universe Explorer, a cruise ship on a week-long tour of the Inside Passage, was trundling quietly along Lynn Canal, its passengers asleep, when fire broke out in the main laundry. The flames and smoke quickly filled the deck above, on which crew members had their sleeping quarters." Maybe I should have stuck to the dogsled.

Are there other books from other summers that have stuck with you?

In August of 1999, I was listening to Morning Edition and heard T.R. Reid, who was then in London, talking about a book that was tearing up the charts in Britain and starting to make waves in the U.S. as well. It was about a little boy with a lightning bolt on his forehead who attended an unusual boarding school called Hogwarts. Thanks to that tip, I like to think I was the first on my block to read Harry Potter, certainly the first grownup on my block. Six years and six books later, I'm in good company.

Also, this time last summer, I was reading So You Want to be a Rock and Roll Star, by Semisonic drummer (and sometimes Morning Edition commentator) Jacob Slichter. His account of the tedium of tour-bus life, punctuated by occasional rock concert excitement, was a great comfort as I endured the tedium of a political bus tour, hoping for occasional campaign rally excitement.

Many of us think about summer reading as more indulgent, more frivolous. How about you?

Arthur Salm, who edits the books section of the San Diego Union Tribune, always scoffs at the notion that summer is a season exclusively for light reading. He argues that with longer days and (if we're lucky) more uninterrupted leisure, this is the time to tackle more substantial fare.

In that spirit, this summer I'm looking forward to reading Jared Diamond's Collapse, the follow-up to his excellent Guns, Germs, and Steel. But first, I enjoyed Christopher Buckley's laugh-out-loud Florence of Arabia, which somehow makes the Middle East seem lighthearted. And I'm delighted that my sister turned me on to Beryl Markham's West With the Night.

Nick Hornby was on Fresh Air recently talking about the two lists he makes: books he buys and books he actually reads. I suspect his new book, A Long Way Down, will make both lists for me.

And the school kids I read to every Friday really enjoyed Walter the Farting Dog: Trouble at the Yard Sale. Theirs is a year-round school, so summer vacation doesn't begin until the end of this month!