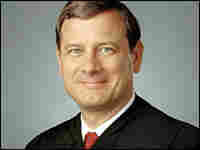 The selection of Roberts ends intense speculation that two other candidates would be the president's choice to take O'Connor's seat: Attorney General Alberto Gonzales and U.S. Appeals Court Judge Edith Brown Clement, who sits on the Fifth Circuit in New Orleans. Roberts has been on the the U.S. Court of Appeals for the District of Columbia Circuit since June 2003, after being selected by President Bush.

On Oct. 30, 2002, the president spoke about the confirmation process:

"The eight who are stalled in the Judiciary Committee include people such as John Roberts. John Roberts has argued 38 cases before the Supreme Court. He has served as Deputy Solicitor General of the United States. He's widely regarded as one of the best Supreme Court lawyers in America."

But Roberts will also likely find allies among many Democratic lawyers who have worked with him over the years. He has been on the D.C. Circuit for only two years, leading some in the conservative movement to say that he doesn't yet have a reliable enough conservative record.

But few who know him have ever thought of Roberts as anything but a reliable conservative in ideology -- and his short tenure on the appeals court has born that out.