Accessibility links
Exploring Burma Through George Orwell A new book explores Myanmar's people and brutal military junta by retracing George Orwell's path through Burma, where he lived as a young man in the 1920s. 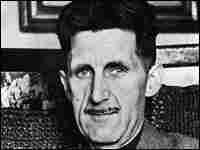 As a young man, George Orwell worked for the British Imperial Police in Burma. This portrait of the writer dates from the 1940s. Corbis Sygma hide caption

When Eric Arthur Blair was 19 years old -- and hadn't yet picked up his pen name of George Orwell -- he went to the far reaches of the British Empire. He joined the Imperial Police Force in Burma and spent five years there in the 1920s.

He left Burma abruptly and decided to become a writer. Orwell's first novel, Burmese Days, was set in the north of the country. But people in that country say Orwell's best-known works, Nineteen Eighty-Four and Animal Farm, are also about Burma.

Writer Emma Larkin (a pseudonym) has retraced Orwell's path through the southeast Asian nation as a way of exploring the present-day country, its people and its brutal military junta, which has renamed the country Myanmar.

Melissa Block talks with the author of Finding George Orwell in Burma. 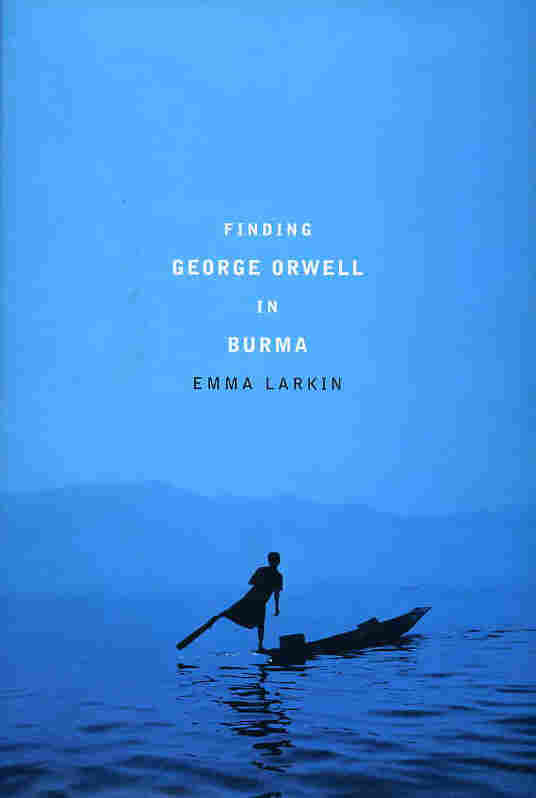 We were sitting in the baking-hot front room of his house in a sleepy port town in Lower Burma. The air was oppressive and muggy. I could hear mosquitoes whining impatiently around my head, and I was about to give up. The man was a well-known scholar in Burma, and I knew he was familiar with Orwell. But he was elderly; cataracts had turned his eyes an oystery blue, and his hands trembled as he readjusted his sarong. I wondered if he was losing his memory but, after several failed attempts, I made one final stab.

'George Orwell,' I repeated -- 'the author of Nineteen Eighty-Four.' The old man's eyes suddenly lit up. He looked at me with a brilliant flash of recognition, slapped his forehead gleefully, and said, 'You mean the prophet!'

A year before George Orwell died in 1950, his typewriter was confiscated. Orwell lay tucked under an electric blanket in a small wooden chalet in the green and pleasant heart of the Cotswolds, dying of pulmonary tuberculosis. Piled around his sickbed were a variety of books: tomes on Stalin and on German atrocities in the Second World War, a study of English labourers in the nineteenth century, a few Thomas Hardy novels, some early Evelyn Waugh. Under the bed was a secret stash of rum.

The doctors at the sanatorium where Orwell was being treated had advised him to stop writing. Any kind of writing, they said, would tire him out. What he needed was total rest. Both his lungs were clogged with lesions, and he was coughing up blood. The disease had now reached a critical stage, and doctors were not hopeful of his chances of recovery. Even if he did survive, he might never be able to write again -- or at least not with the same intensity he was used to. Orwell, however, continued to write. He scribbled letters, composed essays, reviewed books, and corrected proofs of his soon-to-be-published novel Nineteen Eighty-Four. And, simmering in his fevered mind, was an idea for another book: a novella entitled 'A Smoking Room Story', which would revisit Burma, a place he had not been to since his youth.

Orwell had lived in Burma in the 1920s as an officer of the Imperial Police Force. For five years he dressed in khaki jodhpurs and shining black boots. Armed with guns and a sense of moral superiority, the Imperial Police Force patrolled the countryside and kept this far-flung corner of the British Empire in line. Then, suddenly and without warning, he returned to England and handed in his notice. Just as abruptly, he began his career as a writer. Exchanging his real name, 'Eric Arthur Blair', for the pen-name 'George Orwell', he donned the rags of a tramp and marched off into the dank London nights to collect the stories of the down-at-heel. Orwell based his first novel, Burmese Days, on his experiences in the Far East, but it was his later novels such as Animal Farm and Nineteen Eighty-Four that would turn him into one of the most respected and visionary writers of the twentieth century.

It is a particularly uncanny twist of fate that these three novels effectively tell the story of Burma's recent history. The link begins with Burmese Days, which chronicles the country's period under British colonialism. Not long after Burma became independent from Britain in 1948, a military dictator sealed off the country from the outside world, launched 'The Burmese Way to Socialism', and turned Burma into one of the poorest countries in Asia. The same story is told in Orwell's Animal Farm, an allegorical tale about a socialist revolution gone wrong in which a group of pigs overthrow the human farmers and run the farm into ruin. Finally, in Nineteen Eighty-Four Orwell's description of a horrifying and soulless dystopia paints a chillingly accurate picture of Burma today, a country ruled by one of the world's most brutal and tenacious dictatorships.

In Burma there is a joke that Orwell wrote not just one novel about the country, but three: a trilogy comprised of Burmese Days, Animal Farm and Nineteen Eighty-Four.

As I walked down a busy street in Mandalay on my first visit to Burma, in 1995, a Burmese man strode purposefully towards me twirling a black umbrella. He smiled brightly and said, 'Spread our need of democracy to the rest of the world -- the people are so tired.' Then he turned around and walked briskly away. And that was it: one of the few, fleeting glimpses I had that all is not as it seems in Burma.

During the three weeks I spent wandering through postcard-perfect scenes of bustling markets, glittering pagodas and faded British hill stations I found it hard to believe I was travelling through a country that has one of the worst records for human-rights abuse in the world. To me, this is the most staggering thing about Burma: that the oppression of an entire nation of some 50 million people can be completely hidden from view. A vast network of Military Intelligence spies and their informers ensures that no one can do or say anything that might threaten the regime. The Burmese media -- books, magazines, movies and music -- are controlled by a strict censorship board and government propaganda is churned out not only through newspapers and television, but also in schools and universities. These methods of reality-control are kept firmly in place by the invisible, though ever present, threat of torture and imprisonment.

For an outsider like myself, unable to see beyond the façade the generals have created, it was impossible to imagine the daily fear and precariousness of living in such a state. It was during my efforts to understand this aspect of Burmese life that I became fascinated by Orwell. All his novels explore the idea of individuals being trapped within their environment, controlled by their family, the society around them or an all-powerful government. In Nineteen Eighty-Four he conjured up the ultimate vision of oppression, even giving us the language with which to describe it: 'Big Brother', 'Room 101', 'Newspeak'.

As I reread Orwell's novels -- books I had not read since my schooldays -- I became curious about his personal connection with Burma. What was it that had made him trade his career in the colonies for that of a writer? And why, after nearly a quarter of a century away from Burma, did he look to the country for inspiration while he lay on his deathbed? I began to imagine that Orwell had seen something in Burma, had had some thread of an idea, that had worked its way into all his writing. I looked through the various biographies that have been written about Orwell, but their authors seemed to underplay the significance of Burma and, as far I could gather, none of them had ever conducted any research in the places where Orwell spent five life-changing years. The towns and cities where Orwell was posted span the geographical heart of the country and, in a sense, it is still possible to experience Burma as Orwell knew it -- almost half a century of military dictatorship has given it the air of a country frozen in time. But a journey through Orwell's Burma would lead through an even eerier and much more terrifying landscape: that of a real-life Nineteen Eighty-Four where Orwell's nightmare visions are being played out with a gruelling certainty.

Foreign writers and journalists are denied entry to Burma. Occasionally some are able to slip into the country posing as tourists, but if they are discovered their notebooks and photographic film are confiscated and they are swiftly deported. For the Burmese people they interview, the repercussions are infinitely greater. Under the country's 1950 Emergency Provisions Act, providing foreigners with information that the regime considers inimical is punishable with a seven-year prison sentence. Though I worked as a journalist, I rarely wrote about Burma and so it was still possible for me to blend in among tourists or the small expatriate community of business people who are granted long-stay visas. In basing a book on my experiences there were concessions to be made: I would have to change the names of the Burmese people I spoke with and, in some cases, their locations. But, if I was careful, it would be possible to forge a pathway through this seemingly impenetrable country.

Before I left for Burma, I went to the George Orwell Archive in London to look at Orwell's final manuscript. When Orwell died, in 1950, he had only just begun the project. 'A Smoking Room Story' was planned as a novella of thirty to forty thousand words which told how a fresh-faced young British man was irrevocably changed after living in the humid tropical jungles of colonial Burma. In an inky scrawl on the first three pages of a notebook bound in marbled paper Orwell had written an outline for the tale and a short vignette. I flicked through the rest of the book and found the pages blank. The rest of the story, I realized, lay waiting in Burma. 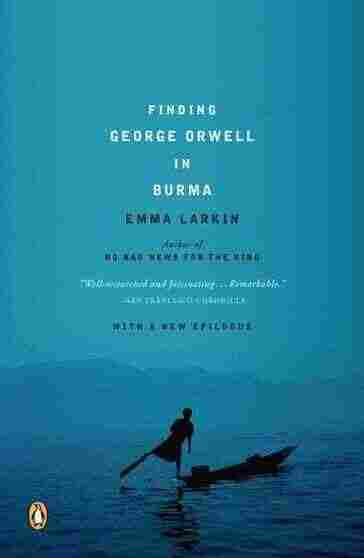