Accessibility links
The Origins of Life: A Catholic View Catholic author George Sim Johnston writes that the Catholic Church has no problem with evolutionary theory or the idea that the first humans had biological antecedents — so long as divine causality is not kept out of the big picture.

The Origins of Life: A Catholic View

The Origins of Life: A Catholic View

George Sim Johnston is the author of Did Darwin Get It Right: Catholics and the Theory of Evolution.

Since the theory of evolution touches on the subject of human origins, the Catholic Church naturally has a deep interest in the topic. There are three important questions: How does the creation account in Genesis square with what science can reasonably demonstrate about the origin of the universe and mankind? What are the implications of Darwinian anthropology, which understands the human person to be an accidental "thing"? And what is the scientific status of the claims made by evolutionists who often disagree about major aspects of the theory?

Pope John Paul II, who had a deep interest in science, went a few steps beyond his predecessors in laying down some ground rules for approaching these issues.

First, the book of Genesis is not a scientific textbook. Written in an archaic, prescientific Hebrew idiom, it tells us what God did, not how he did it. The highly figurative language of the "six days" of creation does not preclude a cosmic process that took billions of years to produce carbon-based life in a suburb of the Milky Way.

The church has had no problem with evolutionary theory or the idea that the first humans had biological antecedents -- so long as divine causality is not kept out of the big picture. The pope added that there had to have been an "ontological leap" from any presumed ancestor to Homo sapiens. In other words, we are not simply trousered apes -- something you can verify by trying to explain the Superbowl to the smartest chimpanzee.

What raises red flags for Catholics is not evolutionary theory per se, but materialist philosophy disguised as science. "The church," wrote Pope John Paul II, "distrusts only preconceived opinions that claim to be based on science, but which in reality surreptitiously cause science to depart from its domain." There is no question that the writings of many Darwinists flunk this test.

People like Stephen Jay Gould, Richard Dawkins and Richard Lewontin start with a philosophical premise: There is no God, therefore a purely materialistic explanation of everything, including us, must be true. But this is ideology, not science. Lewontin, who teaches genetics at Harvard, admits as much: "We take the side of science… in spite of the tolerance of the scientific community for unsubstantiated just-so stories, because we have a prior commitment, a commitment to materialism."

Unfortunately, this crusading materialism leads many Darwinists to make exaggerated claims about what we actually know about the origin of species. Most textbooks still teach a brand of neo-Darwinism which Gould long ago declared "dead, despite its persistence as textbook orthodoxy."

Darwinists also muddle the discussion by failing to distinguish between "Darwinism" and "evolution." The idea of evolution has been around since the ancient Greeks. St. Augustine was a kind of evolutionist, although hardly a Darwinist. What Darwin did was suggest a simple mechanism -- natural selection -- to explain how evolution happened.

But neither the fossil record, nor breeding experiments, nor mathematical probability support the idea that small DNA copying errors "guided" by natural selection created everything from bacteria to human consciousness. Leaving aside the vexed question of how DNA assembled itself in the first place, a significant minority of scientists (especially outside the Anglo-Saxon world) think that Darwinian selection is a grossly inadequate mechanism for the creation of complex life forms.

As for the fossil record, Steven Stanley, a paleontologist who teaches at Johns Hopkins, writes in The New Evolutionary Time Table that "the fossil record does not convincingly document a single transition from one species to another." Darwin described the Cambrian explosion 540 million years ago as "inexplicable," and that remains the case. A man from Mars looking at the record since then would say that species replace other species, rather than evolve into them.

Several years ago, I had drinks with an evolutionary biologist who works at the Museum of Natural History in New York. I waited until he'd had a couple of beers and then said: "You claim that classical Darwinism is dead, and you're obviously not a creationist. So, what do you believe?" His reply is worth pondering: "Look, we know that species reproduce and that there are different species now than there were a hundred million years ago. Everything else is propaganda."

We still lack a hard scientific story of how a batch of inorganic material morphed itself over billions of years into giraffes and trilobites. Man is a separate mystery altogether. The explanatory glibness of much Darwinian literature retards, rather than helps, the scientific investigation of these issues. And, evolutionary theory turns out to be a rather weak stick with which to beat on religion. 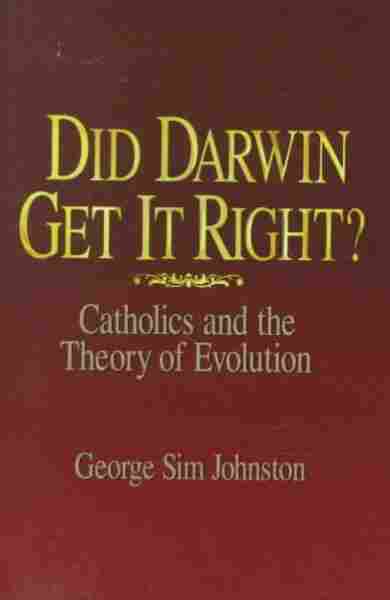 Did Darwin Get It Right?

Catholics and the Theory of Evolution

Title
Did Darwin Get It Right?
Subtitle
Catholics and the Theory of Evolution
Author
George Sim Johnson and George S. Johnston