Accessibility links
Alhurra: America's Broadcast Campaign The Bush administration is trying to improve its battered image in the Middle East with a broadcast "offensive" -- a satellite channel, beamed from Virginia. It's the biggest effort to sway foreign opinion since the Voice of America was founded in 1942. 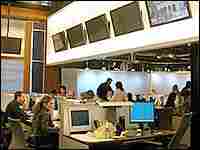 Alhurra, which began broadcasting to the Middle East in Februrary 2004, is based in an anonymous industrial park in the Washington, D.C. suburb of Springfield, Va. Susan Stone hide caption

Even as troops fight insurgents on the ground in Iraq and a resurgent Taliban in Afghanistan, the U.S. government is also trying to improve its battered image in the Middle East -- with a very different kind of weapon.

Last year, the Bush administration launched a satellite channel called Alhurra, or "the free one." It's the biggest and most expensive effort to sway foreign opinion over the airwaves since Voice of America was founded in 1942. Broadcasting from Springfield, Va., the station is beamed throughout the Middle East.

Inside the Springfield Studios

The channel has received a mixed reception from its target audience, and a Saudi cleric issued a fatwa, or religious edict, forbidding Muslims from watching Alhurra. Still, some viewers give the channel credit for broadcasting a relatively balanced version of the news, including reporting on incidents that put America in a bad light, such as the abuse allegations at Guantanamo.

Unlike rivals such as Al-Jazeera, Alhurra isn't all news, all the time. Viewers can tune in to see cooking shows, travel shows, even NBA basketball games. It's all part of a strategy to provide a different and more comprehensive view of what America is all about.

But Alhurra still has a long way to go to catch up to Al-Jazeera, the satellite news leader in the Middle East. Even the name Alhurra leaves a bad taste in the mouths of some viewers, suggesting that "the free one" can only come from the West.