Accessibility links
Jaffe's 'Best of Everything' Stands the Test of Time Rona Jaffe's hit 1958 book The Best of Everything is being reissued, along with a DVD of the 1959 movie. Renee Montagne speaks with Jaffe about the smashing success of her first novel.

Listen
Jaffe's 'Best of Everything' Stands the Test of Time 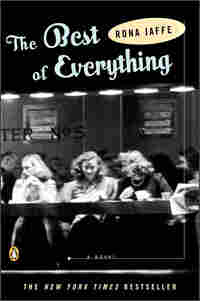 The book was a sensation when it was first published in 1958. First-time author Rona Jaffe became an instant celebrity. Penguin hide caption

When Rona Jaffe's book The Best of Everything arrived on the scene in 1958, society at large saw most women's careers merely as a way to mark time on the way to marriage. This best-selling book paints a picture of a time when the role of women in the workplace was changing.

Jaffe's book follows the lives of three young women making their way in New York City. Love, sex, happiness and career goals all crash headlong into each other as the main characters find their footing in the big city.

The Best of Everything was Rona Jaffe's first book, and it mirrored parts of her own life as a recent graduate working in the publishing industry. Renee Montagne speaks with Jaffe about the relevance of her book almost 50 years after it debuted.

An excerpt from The Best of Everything, chapter one:

You see them every morning at a quarter to nine, rushing out of the maw of the subway tunnel, filing out of Grand Central Station, crossing Lexington and Park and Madison and Fifth avenues, the hundreds and hundreds of girls. Some of them look eager and some look resentful, and some of them look as if they haven’t left their beds yet. Some of them have been up since six-thirty in the morning, the ones who commute from Brooklyn and Yonkers and New Jersey and Staten Island and Connecticut. They carry the morning newspapers and overstuffed handbags. Some of them are wearing pink or chartreuse fuzzy overcoats and five-year-old ankle-strap shoes and have their hair up in pin curls underneath kerchiefs. Some of them are wearing chic black suits (maybe last year’s but who can tell?) and kid gloves and are carrying their lunches in violet-sprigged Bonwit Teller paper bags. None of them has enough money.

At eight-forty-five Wednesday morning, January second, 1952, a twenty-year-old girl named Caroline Bender came out of Grand Central Station and headed west and uptown toward Radio City. She was a more than pretty girl with dark hair and light eyes and a face with a good deal of softness and intelligence in it. She was wearing a grey tweed suit, which had been her dress-up suit in college, and was carrying a small attache case, which contained a wallet with five dollars in it, a book of commuter tickets, some make-up, and three magazines entitled respectively The Cross, My Secret Life, and America's Woman.

It was one of those cold, foggy midwinter mornings in New York, the kind that makes you think of lung ailments. Caroline hurried along with the rest of the crowd, hardly noticing anybody, nervous and frightened and slightly elated. It was her first day at the first job she had ever had in her life, and she did not consider herself basically a career girl. Last year, looking ahead to this damp day in January, she had thought she would be married. Since she'd had a fiance it seemed logical. Now she had no fiance and no one she was interested in, and the new job was more than an economic convenience, it was an emotional necessity. She wasn't sure that being a secretary in a typing pool could possibly be engrossing, but she was going to have to make it so. Otherwise she would have time to think, and would remember too much...

Fabian Publications occupied five air-conditioned floors in one of the modern buildings in Radio City. On this first week of the new year the annual hiring has just been completed. Three secretaries had left the typing pool, one to get married, the other two for better jobs. Three new secretaries had been hired to start on Wednesday, the second of January. One of these was Caroline Bender.

It was five minutes before nine when Caroline reached the floor where the typing pool was located, and she was surprised to find the large room dark and all the typewriters still neatly covered. She had been afraid she would be late, and now she was the first one. She found the switch that turned on the ceiling lights and prowled around waiting for someone to appear. There was a large centre room with rows of desks for the secretaries, and on the edges of this room were the closed doors of the offices for editors. Tinsel Christmas bells and red bows were still taped to some of the doors, looking bedraggled and sad now that the season was over.

She looked into several of the offices and saw that they seemed to progress in order of the occupant's importance from small tile-floored cubicles with two desks, to larger ones with one desk, and finally to two large offices with carpet on the floor, leather lounging chairs, and wood-panelled walls. From the books and magazines lying around in them she could see that one of these belonged to the editor of Derby Books and the other to the editor of The Cross. She heard voices then in the main room, and the sound of laughter and greetings. Stricken with a sudden attack of shyness, she came slowly out of the editor's office.

It was nine o’clock and the room was suddenly filling up with girls, none of whom noticed her presence at all. The teletype operator was combing her hair out of its pin curls, one of the typists was going from desk to desk collecting empty glass jars and taking coffee orders. Covers were being pulled off typewriters, coats hung up, newspapers spread out on desks to be read, and as each new arrival came in she was greeted with delighted cries. It sounded as though they had all been separated from one another for four weeks, not four days. Caroline didn't know which desk was hers and she was afraid to sit at someone else's, so she kept standing, watching, and feeling for the first time that morning that she was an outsider at a private club.

Reprinted by arrangement with Penguin, a member of Penguin Group (USA) Inc., from THE BEST OF EVERYTHING by Rona Jaffe. Copyright (c) 1958 by Rona Jaffe. 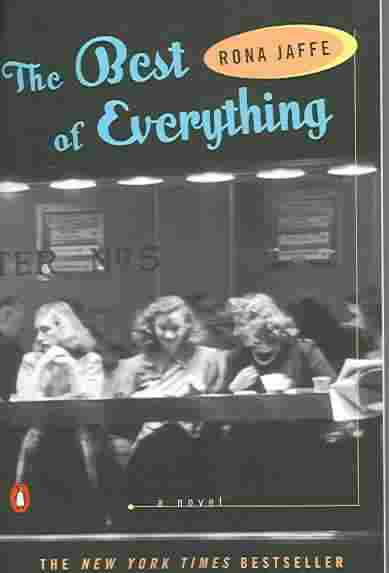 The Best Of Everything

Title
The Best Of Everything
Author
Rona Jaffe