Accessibility links
Simplicity Key to Summer's Tomato Bounty Nothing says summer to award-winning chef Jose Andres like the plethora of unique tomatoes that crop up time of year. And nothing highlights the fruit's taste best, he says, like simple salads, skewers and soup. 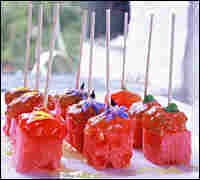 Tomato and watermelon pair up for a refreshing summer treat. Recipes for this tapa, a tomato salad, and gazpacho below. hide caption 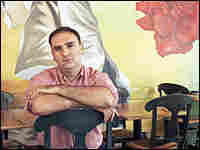 Spanish-born chef Jose Andres has won numerous awards for his imaginative culinary creations. Bon Appetit magazine named him Chef of the Year in the fall of 2004, and in 2003, he won the James Beard Foundation's award for Best Chef of the Mid-Atlantic Region. Andres came to Washington, D.C., in 1993, where he oversees half a dozen restaurants. His first cookbook will hit bookstores in November.

For me, summer hasn't really started until tomatoes reappear in local farmers markets. With their bright color and fantastic balance of acidity and sweetness, tomatoes are a natural refresher and the perfect element for meals on warm and sultry days.

This time of year, I love going to the farmers market, wandering among the tomatoes. There is nothing better than picking up sun-warmed tomatoes and smelling them, feeling them and scrutinizing their shiny skins for imperfections, dreaming of ways to serve them.

In recent years, many farmers have begun to grow heirloom tomato varieties that nearly had passed out of existence. I am glad to see these old varieties -- with their many wonderful, distinctive qualities -- rescued from extinction. Yellow tomatoes and peachy Brandywines, smoky Purple Cherokees and shockingly-green-yet-perfectly-ripe tomatoes like the Green Zebra. Logic tells you it's merely a green variety of tomato, but somehow you are still surprised it tastes so sweet!

And then there are the gargantuan and undulating freeform red ones so different from the pale pink baseballs sold at the supermarket.

In Spain, we mainly use red plum tomatoes, but it is always fun to experiment. Try using a mix of colors or substitute green tomatoes for plum next time you make a tomato dish.

One of the best ways to spotlight tomatoes is a simple salad, where you can really see (and taste!) their depth and subtlety. The salad below is from my soon-to-be-released cookbook, Tapas: A Taste of Spain in America, and showcases the tomato in all its glory. Tomatoes with a variety of textures are combined with fresh herbs and Cabrales, a wonderful blue cheese from Spain.

Another great summer refresher is pairing tomato with watermelon. Unlike its name in Spanish, sandia, which means nothing as far as I know, the English word says all you need to know about this fruit: water melon. Melon de agua. It's one of the most refreshing things to eat in hot weather.

My friend Ferran Adria inspired the recipe below. Today, Ferran is known as one of the most complex, avant-garde chefs in the world -- a Salvador Dali of cuisine, as The New York Times put it. He's all that and more. Ferran has helped a whole generation of younger chefs like me to think the unthinkable and to dream up dishes that were once impossible.

I was lucky enough to work with Ferran at his landmark restaurant El Bulli in Rosas, Spain. The truth is that, more often than not, Ferran innovates by simplifying dishes, not by making them more intricate. That's the philosophy behind this tapa -- a skewer of tomato and watermelon. It's simple, refreshing and perfectly balanced between the bright acidity of the tomatoes and the cool, crisp sweetness of the watermelon.

Another tomato favorite -- perhaps the most special of my favorites -- is my wife Patricia's gazpacho. She is from Andalucia in the south of Spain, a region known for sherry and hams. Andalucia also is the cold-soup capital of the world, thanks to gazpacho. Every summer, when you open the refrigerator in my house, you'll see a big glass pitcher right in the middle with this rich, creamy red liquid inside. This recipe changed my life. I used to be addicted to Coca-Cola, but thanks to my wife's gazpacho, no more.

One final note about tomatoes and their humble seeds: Most people discard them when cooking tomatoes. But trust me, they are a hidden treasure. To harvest the "filet" (as the cluster of seeds is called), take a sharp knife and slice off the ends of a ripe tomato. You'll see there is an exterior wall of tomato flesh around the circumference of the tomato and interior walls running into the tomato's center that separate it into segments. Gently cut through the outer wall of the tomato and one of the dividing walls. Carefully peel back the outer wall of the tomato to expose the seeds. Slide your knife underneath the seed mass and remove. Your aim is to keep the pulp of the seeds together to create tomato-seed "filets."

This seed mass, or what we sometimes call "tomato caviar," can be a new way of adding tomato flavor to a dish. It offers small, bright bursts of pure tomato flavor encased in an amazing natural gelatin and is super refreshing. I like to use them in salads or as a garnish for gazpacho.

Salt and black pepper to taste

In a small saucepan, bring 1 quart of water to a boil. In a medium bowl, prepare an ice-water bath. Drop the cherry tomatoes into the boiling water and blanch for 10 seconds. Drain immediately and immerse the tomatoes in the ice water to halt the cooking process. Remove the skins and cut in half.

Gently peel the other, non-cherry tomatoes and then cut the flesh into small cubes. Set aside.

In a small bowl, mix the oil and vinegar together to make a dressing. Season to taste with salt and pepper.

In a separate bowl, mix together the parsley, chives, chervil, fennel leaves and dill.

For each serving, place the tomato cubes at the bottom of a bowl. Add 2 sets of the pulpy seeds to each bowl. On top of the cubes, add 6 slices of onion and 2 halves of cherry tomato around the bowl. Place 6 pieces of cheese close to the onions. Pour the dressing on top. Sprinkle with the mixed herbs.

8 plum tomatoes, with the seeds prepared as "filets"

Fresh herbs or herb flowers (such as lavender or borage), optional, for the garnish

Take a bamboo skewer and place the watermelon cube on first. Place one set of tomato-seed fillets on top. For a less minimalist -- and thus, less Adria -- effect, add a second set of fruit to the skewer.

In a small bowl, mix the lemon juice, half the lemon zest, the oil and vinegar to make the dressing.

Place the skewers on a serving plate and pour the dressing on top. Sprinkle with sea salt, the remaining lemon zest and the herb flowers. Serve immediately.

Ideally, you should use a microplane for removing the zest of the lemon. If you don't have a microplane, try a very fine grater. Also, if you want to save time, you can use cherry tomatoes instead of the tomato seeds.

8 plum tomatoes, with the seeds prepared as "filets"

Cut out and discard the core at the top of the tomatoes, and chop the tomatoes roughly into quarters. Place in the blender.

Peel the cucumber and cut into chunks. Add to the tomatoes in the blender. Cut the pepper in half, and remove the core along with the seeds. Again, chop into large pieces and place in the blender.

Add the garlic and sherry vinegar to the vegetables and blend until the mixture becomes a thick liquid. At this point the red tomatoes will turn a wonderful pink color. Taste for acidity. This will vary with the sweetness of the tomatoes. If it's not balanced enough, add a little more vinegar. Add the olive oil and season with salt to taste. Re-blend, then pour the gazpacho through a strainer into a pitcher. Place in the fridge to cool for at least half an hour.

While the gazpacho is chilling, prepare the garnish. In a small pan, heat the olive oil over a medium-high flame and fry the bread until golden, about 2 minutes. Break into small pieces to form croutons and set aside.

To serve, place in each bowl 4 croutons, 2 "filets" of tomato seeds, 4 cherry tomato halves, 3 cucumber cubes, and 3 onion segments. Add a few drops of olive oil to each onion segment and drizzle a little more oil around the bowl. Add a few drops of vinegar to each cucumber cube and drizzle a little more around the bowl. Sprinkle sea salt on the tomatoes, and sprinkle the chives across the bowl. When the gazpacho is thoroughly chilled, ladle it into the bowls.

If you want to be original, use yellow or even green tomatoes. You'll surprise your guests. Also, if you want to save time, you can simplify the garnish immensely: just use a few cubes of cucumber, tomato and green pepper.

Too Hot in the Kitchen?

If you don't feel like cooking — and are in the D.C. area — you can still sample an array of Andres' tomato dishes during August at La Tomatina, Jaleo's annual tomato festival.