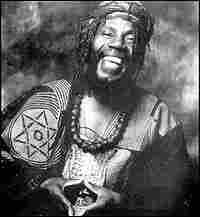 Ras Michael and Sons of Negus

'Tell Them Wherever I Go'

Today is a holy day for followers of the Rastafarian religion. July 23 marks the birth of Ethiopia's late emperor, Haile Selassie.

For the Rastafarians, Selassie is God incarnate. On his birthday, Rastafarians around the world will celebrate with feasts, prayer and hymn singing in a style called Nyabingi music.

Jamaican musician Ras Michael popularized Nyabingi by blending it with reggae during the 1970s and 80s.

Michael, a devout Rastafarian, talks about his faith and his music.