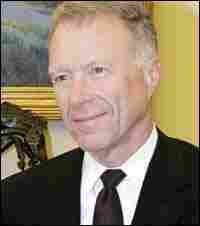 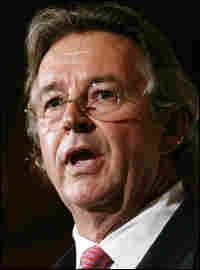 After traveling to Niger, former Ambassador Joseph Wilson said some evidence used to make the case for war against Iraq was exaggerated. Wilson and his wife, Valerie Plame, claim that administration officials retaliated by outing Plame as a CIA agent. Reuters hide caption 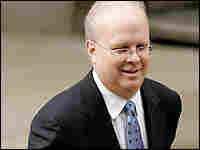 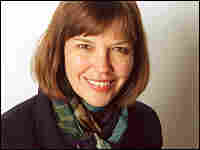 Former New York Times reporter Judith Miller testified before the grand jury after receiving what she calls a voluntary and uncoerced waiver from Libby. hide caption

Syndicated columnist Robert Novak identified Valerie Plame as a CIA operative in a column published in July 2003 — not long after Plame's husband, former ambassador Joseph Wilson, criticized the White House for exaggerating evidence in its push to justify going to war against Iraq. Novak said two unnamed administration sources had identified Plame to him.

That revelation sparked a two-year-long investigation by Special Counsel Patrick Fitzgerald into who disclosed the covert agent's identity. In October 2005, Fitzgerald indicted I. Lewis "Scooter" Libby, then-chief of staff for Vice President Dick Cheney, on charges of obstruction of justice, false statement and perjury in the CIA leak case. Libby resigned from his post and pleaded not guilty to the five counts against him. But a jury found Libby guilty on four of the five counts, convicting him of obstruction, perjury and lying to the FBI. Libby was sentenced to 30 months in prison and fined $250,000.

However, on July 2, 2007, President Bush stepped into the politically charged case by commuting Libby's prison sentence. Libby will not have to serve time behind bars, but he must still pay the fine and serve two years probation.

Following is a timeline of how the CIA leak case has evolved:

February 2002: Former ambassador Joseph C. Wilson travels to Niger at the CIA's request to check for evidence that Iraq bought uranium "yellowcake" from the African country that could be used for production of a nuclear weapon.

Jan. 28, 2003: President Bush delivers his State of the Union address. In the speech he includes the following sentence: "The British government has learned that Saddam Hussein recently sought significant quantities of uranium from Africa." Those 16 words contradicted what Wilson had reported upon his return from Niger to check out the claim. Months later they would be retracted by the White House.

May 6, 2003: The New York Times publishes a column by Nicholas Kristof disputing the accuracy of the 16 words in the president's State of the Union address. The column reports that, following up on a request from the vice president's office, an unnamed ambassador investigated the allegations regarding Iraq's efforts to buy uranium from Niger. Kristoff writes that in early 2002, the ambassador had reported to the CIA and State Department that the allegations were unequivocally wrong.

July 6, 2003: Wilson's op-ed column, "What I Didn't Find in Africa," is published in The New York Times. In it he concludes, "some of the intelligence related to Iraq's nuclear weapons program was twisted to exaggerate the Iraqi threat."

July 7, 2003: President Bush boards Air Force One at Andrews Air Force Base outside Washington en route to Dakar, Senegal. It is the start of a weeklong tour of the continent that become overshadowed by questions about alleged Iraqi WMD.

Also onboard is a top-secret briefing book containing a memo prepared by the State Department identifying Valerie Wilson (Plame's married name) as a CIA officer and as the wife of former Ambassador Joseph Wilson.

July 9, 2003: Speaking to a White House press pool in Pretoria, South Africa, the second stop on the president's Africa tour, Press Secretary Ari Fleischer says the State of the Union address should not have included the reference to Iraqi attempts to acquire uranium from Niger. Fleischer says: "With the advantage of hindsight, it's known now what was not known by the White House prior to the speech. This information should not have risen to the level of a presidential speech."

July 22, 2003: At a White House news briefing, McClellan, when asked about the administration leaking Plame's name, states: "That is not the way this president or this White House operates."

Sept. 14, 2003: Vice President Cheney, on NBC's Meet the Press, is asked if he had been briefed on Wilson's findings when Wilson returned from Niger. Cheney responds: "No. I don't know Joe Wilson. I've never met Joe Wilson." Cheney adds moments later, "I don't know who sent Joe Wilson. He never submitted a report that I ever saw when he came back.

Sept. 16, 2003: McClellan calls "totally ridiculous" the allegation that presidential adviser Karl Rove was the source of the leak.

Sept. 29, 2003: McClellan reiterates his earlier defense of Rove, adding that he had spoken to Rove about the leak.

Sept. 30, 2003: The Justice Department launches a full criminal investigation into the leaking of Plame's name. President Bush, speaking to reporters in Chicago, says, "If there is a leak out of my administration, I want to know who it is. And if the person has violated the law, the person will be taken care of..."

May 21, 2004: Tim Russert, host of NBC's Meet the Press, and Time's Cooper are subpoenaed for the grand jury investigation. Both Time and NBC say that they would fight the subpoenas.

June 24, 2004: Prosecutors question President Bush in the Oval Office. The questioning takes over an hour, and the president is not under oath.

Aug. 9, 2004: Cooper, refusing to reveal his confidential source, is held in contempt of court and ordered to jail by a federal judge in Washington. Judge Thomas F. Hogan also orders Time to pay $1,000 per day until the source is revealed. The decision is stayed pending an appeal.

Aug. 24, 2004: The order to jail Cooper is canceled after he submits to questioning by Justice Department prosecutors.

Oct. 7, 2004: Miller is held in contempt of court for refusing to name confidential sources. Miller has not published any articles about the Plame case. Judge Hogan stays the order pending appeals.

Oct. 13, 2004: Cooper is again held in contempt of court for refusing to identify a confidential source who informed him about Plame's identity.

Oct. 15, 2004: Rove testifies before a federal grand jury for two hours. Fitzgerald assures Rove that he is not a target of the probe.

June 27, 2005: The U.S. Supreme Court declines to review appeals by Cooper and Miller.

July 3, 2005: The Washington Post reports that Karl Rove spoke with Matthew Cooper in July 2003 when Cooper was reporting on Plame's husband. Rove's attorney, Robert Luskin, states, "Karl did nothing wrong."

July 6, 2005: Miller is jailed for refusing to reveal her confidential source. Judge Hogan declares that she was "defying the law." The same day, Cooper agrees to cooperate with the investigation, saying his confidential source granted him permission to comply.

July 11, 2005: During a contentious White House press briefing, McClellan is asked to reconcile his statements from 2003 that Rove had no involvement in the leak with new revelations that Rove had spoken to reporters about Plame. McClellan refuses to discuss the matter, citing the ongoing investigation.

July 12, 2005: The White House says President Bush continues to have confidence in Rove.

July 15, 2005: Rove attorney Robert Luskin tells the Associated Press that Rove made three appearances before the grand jury and answered all questions. Luskin also says he has been assured that his client is not a target of the investigation.

July 17, 2005: In Time magazine, Matt Cooper discusses his testimony before the grand jury investigating the leak. He says Rove never referred to Valerie Plame by name, but that Cooper did learn from that conversation with Rove that Wilson's wife worked for the CIA and was involved in WMD issues.

July 18, 2005: President Bush, during a White House appearance with India's Prime Minister Singh is asked if, regardless of whether a crime was committed, he still intends to fire anyone found to be involved in the CIA leak case. The president replies that if someone "committed a crime, they will no longer work in my administration."

Aug. 4, 2005: Novak swears in disgust and walks off the set of CNN's program Inside Politics in response to a comment from Democratic strategist James Carville. Carville tells viewers that he thinks Novak is trying to "show these right-wingers that he's got a backbone." The two were discussing U.S. Rep. Katherine Harris (R-FL), and Carville's comment was unrelated to the CIA leak investigation. But CNN correspondent Ed Henry said he was about to ask Novak about the CIA leak case when the columnist walked off the set.

Aug. 5, 2005: Novak apologizes for walking off the set of Inside Politics but says it had "absolutely nothing" to do with the CIA leak probe. "I was sorry he said that," Novak said of CNN's Ed Henry.

Sept. 29, 2005: Reporter Judith Miller is released from the Alexandria Detention Center in Virginia. Editors at The New York Times say she reached a deal with U.S. Attorney Patrick J. Fitzgerald to testify. The editors say her source in the leak probe offered assurances that he wanted her to testify and was not coerced into releasing her from a promise of confidentiality.

Sept. 30, 2005: The Times identifies Miller's source as I. Lewis Libby, Cheney's chief of staff. In Washington, Miller testifies before the grand jury. Afterwards, she declines to confirm that Libby was her source, but says the source sent her a letter and called her in prison. "I concluded from this that my source genuinely wanted me to testify," she says.

Oct. 14, 2005: Presidential adviser Karl Rove makes his fourth appearance before the federal grand jury. Rove's appearance was voluntary, but at the request of Special Counsel Patrick Fitzgerald. In a statement afterwards, Rove's lawyer Robert Luskin said Fitzgerald "has not advised Mr. Rove that he is a target of the investigation and affirmed that he has made no decision concerning charges. The special counsel has indicated that he does not anticipate the need for Mr. Rove's further cooperation."

Oct. 16, 2005: In a New York Times article recounting her testimony before the grand jury, Judith Miller writes that notes of her conversations with Lewis Libby, Vice President Dick Cheney's chief of staff, suggested that the two had discussed Plame's job at the CIA but not her name. Miller wrote Plame's name in the same notebook she used when taking notes during her interviews with Libby, but said she cannot remember who gave her the CIA operative's name.

Oct. 25, 2005: Citing lawyers connected to the case, The New York Times reports that Lewis Libby, Vice President Dick Cheney's chief of staff, first learned about Plame from a conversation with Cheney in the weeks before her identity became public in 2003. Libby's notes from that conversation, which took place June 12, 2003, contradict Libby's testimony to a federal grand jury that he first learned about Plame from journalists, lawyers told the paper. The previously undisclosed notes are now in the possession of prosecutors.

Nov. 3, 2005: Libby pleads not guilty in federal court to the five-count indictment against him.

Nov. 15, 2005: Washington Post editor Bob Woodward testifies that a "senior administration official" told him about Valerie Plame and her job at the CIA nearly a month before she was first named in Robert Novak's column. The revelation would make the source, who Woodward refused to identify, the first official to reveal Plame's identity to a reporter.

April 26, 2006: Presidential adviser Karl Rove testifies for a fifth time before a grand jury. Fitzgerald says he is investigating whether Rove lied or obstructed justice in failing to initially disclose his conversation with Time magazine reporter Matt Cooper. Rove blamed a faulty memory.

June 13, 2006: A lawyer for Rove says his client has been informed by prosecutors he won't be charged with any crimes in the investigation, ending months of speculation.

March 6, 2007: Jury returns guilty verdict on four of five counts, convicting Libby of obstruction, perjury and lying to the FBI.

July 2, 2007: A federal appeals court rejects Libby's request to remain free on bail while pursuing appeals — meaning Libby would likely have to report to prison soon. Hours later, President Bush commutes Libby's prison sentence, leaving the $250,000 fine and two years probation intact. "I respect the jury's verdict," Bush says in a statement. "But I have concluded that the prison sentence given to Mr. Libby is excessive."