Accessibility links
Cats Can't Taste Sweetness, Study Finds Some scientists have long suspected that cats, which are strict carnivores, are "sweet blind." Now there's proof: Cats lack the receptor for sweetness. The discovery opens a window on what taste is for and how it evolved. It may also help cat food makers producer a product that even sick cats will eat.

Some scientists have long suspected that cats, which are strict carnivores, are "sweet blind." Now there's proof: Cats lack the receptor for sweetness. The discovery opens a window on what taste is for and how it evolved. It may also help cat food makers producer a product that even sick cats will eat. 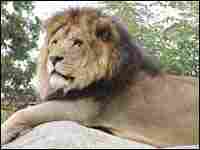 Chris, a 12-year-old, 400-pound lion at the Zoo New England, has been on a lifelong, radical Atkins diet -- super-high protein and absolutely no carbohydrates. It turns out Chris, like other cats, lacks the ability to taste the sweetness in carbs. Courtesy Zoo New England hide caption

People who own cats, or perhaps we should say people who are owned by cats, know that their pets do not always share their taste in food, and now researchers think they know why. Cats and possibly other carnivores simply cannot taste things the way that most species do. NPR's Richard Knox reports that this opens a window on what the sense of taste is for.

Pitty the poor feline. Scientists have discovered that cats are on a lifelong Atkins diet. Not only do they not eat carbohydrates, they can't even taste sweet things. That includes big cats...

KNOX: ...like Chris, a magnificent 400-pound lion at Boston Zoo, and it includes house cats like Punky, a white Persian.

KNOX: Joseph Brand of Monell Chemical Senses Center in Philadelphia says the discovery that cats are blind to sweetness solves more than one mystery.

Mr. JOSEPH BRAND (Monell Chemical Senses Center): I always wondered why cats are so cranky and, you know, thinking about it, jokingly, here they are, they have to spend their whole day catching food, eating food, and they don't even have a chance to enjoy a sweet dessert.

KNOX: Brand, by the way, has cats of his own. He's also the senior author of a paper just published in Public Library of Science Genetics. The team discovered that felines don't have taste buds for sweetness. That's because one of the two genes necessary to make the sweetness receptor got permanently switched off millions of years ago.

KNOX: Brand says this was a watershed event in cat history.

Mr. BRAND: There's no turning back when you have a deletion because that part of the gene structure is gone. So just a gut feeling here that the deletion may have occurred first, forcing the animal to become a strict carnivore.

KNOX: Now most of us civilized animals think of taste as one of life's amenities. But Gary Beauchamp says that's not what taste is for. Beauchamp is director of the Monell Center, which studies taste and smell.

KNOX: Most poisons are bitter, so that's why we can taste bitterness. Sweetness is the other side of the evolutionary coin.

Mr. BEAUCHAMP: Sweet has presumed to have evolved as a way to detect plants that are high in calories, perhaps high in vitamins as well. Most species like sweets because this is a signal for something that's useful and healthy for the body.

KNOX: The ability to taste sweetness goes way back, before mammals prowled the Earth. Daniel Rittschof of Duke University studies fiddler crabs. They have tongues on their feet. Those tongues have sweetness receptors. That's because the crabs live off tiny organisms glued to sand grains.

Mr. DANIEL RITTSCHOF (Duke University): Those glues are made out of sugar. They're made out of glucose. So the ability to taste glucose is key for them to eat things that are living on sand grains.

KNOX: Rittschof was fascinated to find out that felines have lost the ability to taste sweetness.

Mr. RITTSCHOF: I think of cats as really picky eaters. Most people do. All you have to do is watch the TV ads and cats are picky. Dogs--you put something in front of a dog and he'll eat it. And it never occurred to me that part of the reason that they're that picky may be because sweet things don't do anything for them.

KNOX: That's interesting, but does it have any practical value? Joseph Brand of Monell says it might in making a better medicinal cat food, one that even a sick cat would eat. Beyond that, Brand is working on other sweet mysteries, such as why some individuals have a sweet tooth and others don't. As for cat lovers who say, `My cat eats ice cream,' or `My cat eats cake,' Brand says it's very, very, very unlikely they're tasting the sweetness. They're eating it for the fat.