Accessibility links
Pawlikowski's Classy 'Summer of Love' Pawel Pawlikowski is one of Britain's most decorated filmmakers. Now his latest film has reached the United States, amid much critical praise. My Summer of Love revolves around two girls of different classes who meet and find themselves drawn to each other.

Pawel Pawlikowski is one of Britain's most decorated filmmakers. Now his latest film has reached the United States, amid much critical praise. My Summer of Love revolves around two girls of different classes who meet and find themselves drawn to each other. 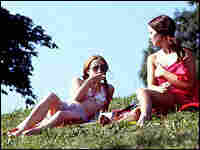 Emily Blunt and Natalie Press are teenagers drawn to each other in Pawel Pawlikowski's film. hide caption

One of the most honored British filmmakers to emerge in the last decade is someone you've probably never heard of, Pawel Pawlikowski. His BBC documentaries won many prizes, as did his 2001 feature film "Last Resort." His latest, "My Summer of Love," was named best British film of 2004 by that country's Academy of Film and Television Arts. "My Summer of Love" has just opened in the United States, and critics here are praising it as well.

The plot is ever so English: a fateful encounter between two girls from different classes. However, as Pat Dowell reports, the director takes anything but the typical English approach to the subject.

Pawel Pawlikowski is used to seeing things a bit differently from those around him. Take Yorkshire, a part of England that's notoriously cold and rainy. In "My Summer of Love," Yorkshire looks sunny and warm.

(Soundbite of animal sounds from "My Summer of Love")

Mr. PAWEL PAWLIKOWSKI (Filmmaker): Precisely. Because everyone imagines it a certain way, we try and shoot it differently. We tried to, first of all, introduce rich, saturated colors; also, eliminate the--too much information from the picture, you know, so just concentrate on the key features--very few...

(Soundbite from "My Summer of Love")

Mr. PAWLIKOWSKI: ...and try and shoot it in a certain light to kind of--to bring out the sculpture of the terrain differently. You know, it was a way of estranging England maybe, making it look unfamiliar, but also actually drawing attention to how it really looks if only one tries to do something photographic with it--you know, actually tries to transform it. But I still wouldn't go there on holiday if I were you.

DOWELL: Pawlikowski seems almost proud of being an outsider, a situation in which he found himself in the 1970s as a Polish teen-ager carted off to Britain after his parents divorced.

Mr. PAWLIKOWSKI: You know, when I came to England, I was 15, and I couldn't speak a word of it. And I was--you know, I didn't have any money, and my mother was busy with her own life. And, you know, I did spend a lot of time just looking in from outside, not quite understanding what's going on. You know, `Why are these people behaving so strangely?' And, of course, the English behave strangely anyway. But it does make you live in your own head a bit more and observe with greater sharpness possibly. But you can be an outsider without being a foreigner, you know. It's a choice you make or it's a character you have. I don't know.

DOWELL: It was certainly a cinematic choice for Pawlikowski. He started in the BBC making documentaries. And even though his subjects included Czech statesman Vaclav Havel and Russian politician, Vlad Zhirinovsky, these non-fiction films were often praised for seeming like fiction.

Mr. PAWLIKOWSKI: They have very little to do with the sort of Anglo-Saxon empirical approach to documentary. You know, they're sort of humble following people around in the so-called verite tradition.

DOWELL: Pawlikowski says he did not change his basic message when he began making fiction films. He finds the subjects that interest him enough to spend a couple of years on, and he begins writing and he keeps writing.

Mr. PAWLIKOWSKI: For me, writing is not just something you do behind a desk, you know. It's a kind of ongoing thing. And everything that happens to me, you know, when I location scout, which I do for weeks, I hike around a lot with my stills camera. But then every little encounter, every little bit of nature, anything that stimulates an idea, you know, I note down and then later at night or in two weeks' time I process it and either throw it away or put it in the script.

DOWELL: But he says he writes only the pivotal scenes before he casts the film. Nathalie Press, an actress who went from waiting tables to starring in the British film of the year, says when she auditioned, the script was a 30-page treatment.

Ms. PRESS: Some things, he told us to drop the script and improvise. Sometimes he'd ask me to stop improvising and stick to the text. Sometimes we would be writing at breakfast, and sometimes he would just shout lines to us as we were filming. So it's a process that's quite hard to articulate.

DOWELL: Press plays blonde, wild Mona from a pub down in the valley. Tamsin, cool and seductive, is from a big house up on the hill. They immediately become infatuated with each other and spend their summer on secret and increasingly intimate adventures.

(Soundbite of "My Summer of Love")

Unidentified Woman #2: God, you're quite beautiful.

DOWELL: Blunt ultimately appreciated Pawlikowski's style as an unconventional opportunity that she'll probably never have again. She'll next be seen on the little screen in the ABC miniseries "Empire," a production at the other end of the entertainment universe from the way Pawel Pawlikowski works. He describes his method as `hand-making films.'

Mr. PAWLIKOWSKI: The whole process is much closer to kind of sculpting, you know. There's an amount of writing and observing, but all the time the one thing you're aware of what's going to end up on screen. And what ends up on screen has to be like good literature. You know, the equivalent of good literature is to have a life of its own, have layers, has to be very simple but strike as many chords as possible and has to be kind of slippery and ambiguous because that's how I like it. That's how I experience life, and that's what I want to re-create, you know, in a kind of sublimated forum in the cinema.

DOWELL: Sublimated perhaps the way class conflict is relegated to just a given in "My Summer of Love." Pawlikowski says he wanted to avoid a typically British failing.

Mr. PAWLIKOWSKI: You know, the people are so obsessed with class that they don't actually see the forest for the trees. You know, they actually spend time proving the obvious, you know, making films about the same subjects in the same style, photographing the same states where the workers live, supposedly, and in the same light usually. And then they spend a lot of time explaining how nasty the upper-class people are, you know. You know which films I'm talking about, so we don't have to elaborate there. But it's--but, you know, the great thing is cinema has got the power to transcend that if you look at the world in a certain way, slightly against the grain, against the way people--everyone else looks at it at the particular time.

DOWELL: Ever the contrarian, Pawel Pawlikowski is writing a book on the limits of realism and particularly the realism in British cinema. At the same time he's working on three screenplays. Whichever one wakes him from hibernation, as he puts it, and whichever one he can find money to make his way will be his next film. For NPR News, this is Pat Dowell.

'My Summer of Love' Site