Accessibility links
Armstrong Goes Out on Top with Tour Victory For the seventh year in a row, Lance Armstrong has won the Tour de France. And this was a victory lap of sorts. Armstrong will retire at 33. Racing fans will miss him, but look forward to new competition.

Listen
Armstrong Goes Out on Top with Tour Victory

For the seventh year in a row, Lance Armstrong has won the Tour de France. And this was a victory lap of sorts. Armstrong will retire at 33. Racing fans will miss him, but look forward to new competition. 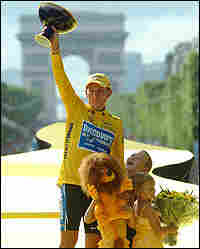 Lance Armstrong has just won a record seventh consecutive Tour de France and will now retire from cycling at the pinnacle of his career. Over the years many have loved him and some have not, but everyone in Paris today agreed that he is the world's cycling champion. Eleanor Beardsley is on the line from Paris.

LYDEN: So Lance Armstrong must be feeling pretty bon vivant and happy and enjoying the fruits of his victory.

BEARDSLEY: Yes, I think he is. When "The Star-Spangled Banner" played today on the Champs Elysees for the seventh year in a row, the seventh July, he looked pretty happy up there. He was surrounded by his three children, who were all dressed in yellow, as he received the yellow jersey for the last time. And it was really a glorious moment for him, yes.

LYDEN: Now did the French clap, applaud? Is everyone happy for him?

BEARDSLEY: Oh, God, yeah. Everyone went crazy. I mean, people were out, and you had tons of Lance Armstrong supporters from the US but also from all over the world. And he made a huge effort to woo the French this year. He got away from his security, out of his bus, and he would go into the throngs and the crowds, and the people really did like him. One newspaper kept a daily novel of Lance Armstrong's life, and, no, the people loved him. I mean, even if he wasn't the main person that some people were, you know, supporting, everyone recognized that he is, you know, the world's premier cyclist and he's a total champion. So people really clapped, and they appreciated his performance, yes.

LYDEN: Did you get a chance to look at any of that novel that he kept each day?

BEARDSLEY: Yeah. They were just small things that took him through, like, certain times in his cancer, and there was one part when he appeared with George Bush after 9/11. So they'd have different little pictures. So some of them were not even related to cycling. It was just--there was a chapter about him and Sheryl Crow meeting. And so there was just various little snapshots of his life. He's really--people are very interested in him. They're very interested in his relationship with Sheryl Crow. And throughout the Tour there was--the sort of tabloid magazines would have pictures of her watching the Tour, looking very stressed out, rooting for her man. So people were all interested in it.

LYDEN: Well, it almost seems as if he was sort of setting the public up because as he's announced, this is his last Tour and, you know, wanted to be remembered in a certain way.

BEARDSLEY: It seems that he was. I mean, he said today--he got up and spoke on the podium, and he said, `I love this Tour.' And he said, `Vive le Tour forever,' you know. I think he wanted to go out with a bang. I mean, it was--he did this one for himself, and he wanted to go out with people having a good feeling towards him, and I think he succeeded in doing that. He changed his image from last year. There was this whole sort of cloud of the doping thing 'cause this book came out three days before the Tour started, and so that--it was sort of under this cloud. But this year people just said positive things. I was around on different stages, and I really heard nothing bad about him this year.

LYDEN: Some fans must be looking forward to a Lance-less Tour next year, however.

BEARDSLEY: Yeah, a lot of people said, you know, `He is the best, and we realize that.' One guy said, `But he's so good, his competitors--they know he's going to win, so they don't even try anymore, and it's getting boring.' So a couple people said, `We'll be looking forward to the suspense of next year to see who might actually win it,' 'cause if it were Lance an eighth time, it would--if he were, you know, going an eighth time, he'd win it. So, you know, next year we'll have some suspense finally.

LYDEN: It'll be a `Lance-a-less.' Pretty bad joke, but thanks very much for joining us.