Accessibility links
Cool and Comforting Ceviche Food writer Gabriella Gershenson shares a party plan featuring ceviche -- a classic Latin American dish that can be whipped up in a cool kitchen. 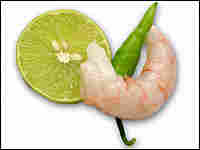 As summer rolls along, my thoughts turned recently, as they do every year at this time, to my birthday. As I pondered how to celebrate, I considered cooking.

Making meals for friends fulfills me in a way that little else does. Observing the ability of good food to relax guests, turn strangers into confidants, and flush cheeks with satiation and laughter is its own reward. (The praise that inevitably follows is nice, too.)

Gabriella Gershenson is a New York City-based food writer and restaurant critic. She contributes a regular column to the New York Press and has written for such publications as the Boston Globe, San Francisco Chronicle and the Providence Journal.

Learn more about the author at www.gabiwrites.com.

In a fit of sentimentality and raw ambition, I decided to make my own birthday dinner. A recipe in a glossy magazine for sky-high passion fruit meringue tart captured my imagination and quickly became the keystone of my meal.

But in my attempts to develop a menu based on the dessert, I encountered some conceptual problems. I couldn't get around the tart's "French"-ness. For several nights I lay awake, considering my options. With nothing but viscous sauces and foie gras plodding through my head, I feared that I had painted myself into a culinary corner.

Preoccupied with the faux pas of serving a heavy French meal on a hot summer eve, I had failed to take into account the more basic problem of cooking in Manhattan this time of year. In a word: sweat. Streams of it rolling down the backs of my knees, beads of it forming at my hairline.

If I were to log several hours in my non-air conditioned kitchen, this is what I had to look forward to. Though potentially good for the pores, this was not my idea of a birthday treat.

In a merciful moment bestowed by the food gods, it occurred to me that my tart did not have to be French. It could be Latin American. My favorite pan-Latin restaurant in New York, Esperanto, finishes off its meals with a frothy passion fruit mousse. It also serves a tuna ceviche that has become a minor addiction.

Ceviche, a South American specialty of raw fish pickled in citrus juice, requires no cooking. The acid from the lime, lemon or orange juice changes the structure of the proteins in the fish much in the same way that heat does. (If you make it at home, you can observe the flesh turning from translucent to opaque.) Therein lay my answer.

In the past few years, ceviche has made its way onto the tables of many a posh restaurant. It has been subjected to presentations -- absurdly stacked vertical constructions, gussied up in martini glasses -- designed to intimidate the home cook. At Esperanto, ceviche is a gratifying comfort food. Ungarnished in a white ceramic bowl, the heap of tuna, crisp veggies and cilantro in a broth of coconut milk and lime juice speaks only these words: dig in. This, I decided, is how I would serve it to my guests.

A wonderfully informal dish, ceviche invites variations. Red or sweet onions, mango or watermelon, any fruit or vegetable that you think would go well in your ceviche probably will. Most types of white fish can substitute for the tuna in Esperanto's recipe and scallops and shrimp can be used as well, though they must be poached first.

For my dinner, I used flounder. It worked beautifully and is generally inexpensive. When choosing your fish, let the fishmonger know you intend to eat it raw. Citrus will cook the meat but it won't kill parasites, so quality is important. Served with a seasonal salad, a generous bowl of ceviche can make for a refreshing -- and heat-free -- summer meal.

1 pound Ahi tuna (or other fish, mentioned above)*

2. In a large, non-reactive bowl (glass or ceramic), combine the lime juice, coconut milk and salt. Stir to mix. Add remaining ingredients and mix them gently to coat the fish.

3. Cover the mixture and let it rest in the refrigerator for at least 10 minutes, then taste it and adjust the seasonings if necessary. Refrigerate until time to serve.

IMPORTANT NOTE: Eat within four hours or the fish will "overcook" and become dry.

* Shrimp and scallops can be substituted to good effect, but first poach them briefly in boiling water.