Accessibility links
Carly Simon Sings American Classics, Again Carly Simon, with Moonlight Serenade is on her fourth recording of American classics by composers like George & Ira Gershwin and Cole Porter. She talks about her musical life, then and now. 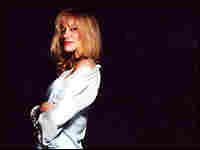 Carly Simon has seen a lot of life: at the age of 60 she's survived divorce, anxiety attacks, breast cancer and the loss of several loved ones. But she still has a mile-wide smile, a generous spirit and that indelible voice.

How Long Has This Been Going On

Her newest album of standards -- called Moonlight Serenade -- includes songs she learned as a little girl. Carly and her sisters always sang, washing dishes in the family kitchen in Riverdale, New York.

All the Simon girls grew up to make their lives in music, and so did Carly Simon's daughter, rocker Sally Taylor. Joanna Simon is an opera singer. Lucy Simon wrote the hit Broadway musical The Secret Garden. In the early 1960s, wearing matching outfits, Lucy and Carly Simon sang folksongs in clubs and coffee houses.

When Lucy had a baby in 1965, the act broke up. Carly Simon began to write music, as well as sing it. And in 1971 a song on her very first album became a hit.

Now, more than 30 years later, she's on her fourth recording of American classics by composers such as George & Ira Gershwin and Cole Porter.