Accessibility links
One Man Against AIDS in China Li Dan, a young idealist, has devoted his life to helping those with HIV and AIDS. He is part of an emerging civil society seeking to bridge a gap between people's needs and government's offerings. His story underlines the growing individualism in China.

Listen
One Man Against AIDS in China 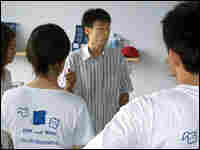 Li Dan, a young idealist, has devoted his life to helping those with HIV-AIDS in China. He is part of an emerging civil society in China that seeks to bridge the gap between what people need and what the government provides. His story is the second in a series on the development of individualism in China.

Li says he first became aware of AIDS and the ostracism that goes with it when he saw the Tom Hanks movie Philadelphia in 1998. He gave up graduate school and threw himself into work as a volunteer publicizing the AIDS problem.

He heard about villages of Henan province, south of Beijing, where people became infected with HIV through the unhygienic practices of government-run blood collection centers. Incensed by how the Henan government was trying to cover up its complicity, Li set about trying to help children orphaned by AIDS.

"Many officials in Henan thought we had a political agenda, but we didn't," Li says. "We were just trying to help the AIDS orphans." Even so, he and his small group of fellow volunteers have been detained several times, and beaten by local police.

The big problem, he says, is the complete lack of any concept of civil society in modern China, that space between the individual and the government that has long been filled in the West by religious or civic organizations.