Accessibility links
Geico's Mixed Bag Slate contributor Seth Stevenson examines the latest series of ads from the insurance company Geico. The commercials range from parodies to straightforward -- and, some say, bland -- pitches for their services.

Slate contributor Seth Stevenson examines the latest series of ads from the insurance company Geico. The commercials range from parodies to straightforward — and, some say, bland — pitches for their services. 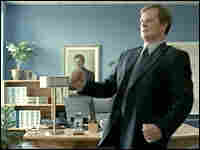 TV ads for Geico range from the straight-forward to the ridiculous. Geico hide caption

And from arms to advertising. We're joined regularly by Seth Stevenson, who writes the Ad Report Card column for slate.com. Seth watches a lot of TV for that job, but recently even he was fooled by a stealth ad.

Perhaps you've seen the commercial that begins like a promo for a new reality TV series.

Unidentified Man #1: The marriage was built to last.

Unidentified Man #2: You are so awesome.

Unidentified Man #1: But the house was built too small.

STEVENSON: In the show, called "Tiny House," a newlywed couple moves into a midget-sized apartment. Heads smash into low ceilings, limbs spill out of a teensy bed. But wait a second: We've been had.

Unidentified Man #2: The drama will be real, but it won't save you any money on car insurance.

Unidentified Man #3: GEICO. Fifteen minutes could save you 15 percent or more.

STEVENSON: The first time I saw this commercial, a brilliant, dead-on parody that may be the funniest ad of the past year, I was totally fooled. But yes, it's yet another ad for GEICO.

GEICO ads are all over television. There's the series of spots that end with a surprise punch line. This one looks like a nature documentary.

Unidentified Man #4: Salmon spend most of their adult lives in the ocean. After maturing, they migrate back to spawn in the same rivers and streams where they were born. It is here that many a salmon's life is cut short. However, there is good news. I just saved a bunch of money on my car insurance by switching to GEICO.

STEVENSON: Then there's the campaign where a talking gecko serves as an annoying, generally unfunny spokescharacter.

Unidentified Man #5: (As gecko) Hello? No, I can't save you money on car insurance. You want GEICO, not gecko. Well, that's uncalled for.

STEVENSON: So why does GEICO use so many different ad styles, some sharp and clever, some disappointingly bland? The scattershot approach makes sense when you think about GEICO's customers. Car insurance has perhaps the broadest target audience of any product. Who is GEICO selling to? Pretty much everyone--man or woman, gay or straight, black or white, hip or hick. If you drive a car, they want your business. We all drive, we all have insurance, I hope, and we all stay insured through every stage of our lives, no matter our mood or our marital status or income. So GEICO needs to air a range of spots that will appeal to lots of different people. The tamer, more straightforward ads are aimed at older drivers, while the absurd commercials are targeted at the young.

But it's not just GEICO. Why are there so many car insurance ads on TV? It seems the industry has seen a profitability spike in the last few years. Accident rates have gone down, partly due to better-built cars, partly due to an aging and thus slower-driving population. Therefore insurance claims have decreased. Since there's suddenly more money to be made, everyone's trying to grab a bigger share, and the quickest way to do that is by ramping up your television ads.

At the moment GEICO's market share is 5.6 percent, far below that of the big boys like State Farm and Allstate. But GEICO is growing fast, and it relies on direct-to-consumer sales instead of a network of sales guy middlemen. While its competitors are running lots of dour ads that exploit our fear of accidents, GEICO stands out from the clutter with its oddball humor and lighthearted tone. The company has managed to inject some fun into a product that we resent having to buy and that we associate with miserable moments, and that's no mean feat.

DAY TO DAY is a production of NPR News with contributions from slate.com. I'm Madeleine Brand.