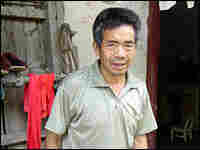 After three years in the post, Wan Shuguang doubts he will seek re-election as the chief of his village in central China's Hubei province. Rob Gifford, NPR hide caption

In 2002, with rural unrest spreading in China, the central government stepped up its policy of allowing some villages to elect leaders. Wan Shuguang, a peasant in central China, stood for election as village chief and won. He set about trying to make government more transparent, especially in its finances. Nearly three years later, with his term coming to an end, much of his optimism has dissipated.

Wan says he was badly beaten recently by the Communist Party secretary of his village, because he was not respectful enough in a letter to the party official. It was the latest but certainly the worst in a long string of disputes that have dogged the 60-year-old peasant since the day he was elected.

Wan says he is unlikely to stand for reelection. "In this current fake democracy, and especially after being beaten, I'm asking myself, 'Is it really worth it to stand again for office?'" he says. "Of course, I would be reelected if it were fair because the people support me, but I am so exhausted with all the confrontation, I think I probably won't stand."

As China's economy and society are transformed by reform, the story of how Wan went from confident democratically elected village leader to cowed victim of local Communist Party brutality is a sign of just how far China has to go politically. Rob Gifford has Wan's story, as part of his series, "A Nation of Individuals."