Accessibility links
Taller Chicago Skyscraper Proposed A 2,000-foot tower, proposed by developer Christopher Carley and designed by architect Santiago Calatrava, would rise above the lakefront... and give Chicago the nation's two tallest buildings.

A 2,000-foot tower, proposed by developer Christopher Carley and designed by architect Santiago Calatrava, would rise above the lakefront... and give Chicago the nation's two tallest buildings. 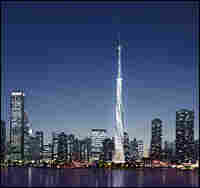 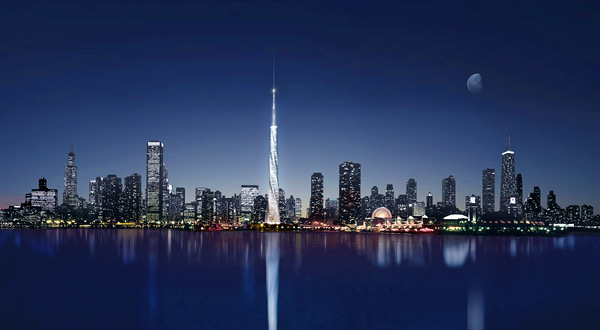 An artist's rendering of the proposed 2,000-foot Fordham Spire, which would dwarf Chicago's Sears Tower.

Chicago gave birth to the skyscraper back in 1885, and the city has never been satisfied. Its Sears Tower is currently the tallest building in the country at 1,454 feet. And now there are plans to build an even taller building. Chicago Public Radio's Edward Lifson reports.

While most buildings in this town are blocky and brawny and dark and muscular, the new proposed Fordham Spire, which would be built near where the Chicago River meets the lakefront, would be glassy and slender. It would twist up into the sky like a tapering corkscrew. The drawings just released for this condo and hotel building show a structure that tops out at 2,000 feet, including the tall spire on top. But even without the spire, the building portion would be about 8 feet higher than the building portion of the Sears Tower. The architect, Santiago Calatrava, says it just happened that way. He doesn't need to design the nation's tallest building.

Mr. SANTIAGO CALATRAVA (Architect): Our goal was not being tall but being slender and being elegant in a very almost immaterial way. There is also a certain heroic gesture.

LIFSON: And it just so happens that a little ways down the Chicago River another developer is building one of the tallest buildings in the US. His name? Donald Trump. He wanted to go world's tallest, but after the terrorist attacks of 9/11, Trump downsized his fancy Chicago condo and hotel project. Trump was quoted in the Tribune about this new project as saying that, "In this climate, I would not want to live in that building." And he said, `Any bank that would put up money to build a building like that would be insane.' Asked about that at this morning's press conference, the developer of the new project, Chris Carley, thrust back.

Mr. CHRIS CARLEY (Developer, Fordham Spire): I think he's right that he wouldn't live in it.

Mr. CARLEY: And I think his quote, too, was it's `insanity' to be this high. And we're about a hundred and some feet taller than his, so our insanity must be just that last hundred feet.

LIFSON: Very few Chicagoans could afford to live in what would likely be the most expensive condos in this city, if the project gets built. And they're mixed in their reactions. Here's Ron Jacubison(ph).

Mr. RON JACUBISON: Well, it stands out. That's for sure. The size of it's great. I don't know about the twisty part, though. That's--I'd have to get used to that part. It's really tall. It's really big.

LIFSON: `That it would be,' says Chicagoan Eleanor McClinton. And she asks why, with so many other pressing needs in the city.

Ms. ELEANOR McCLINTON: Oh, no, I just think man has created so much things as it is, and he needed to try to--concentrating on getting along with each other instead of building all these skyscrapers.

LIFSON: After acquiring the land and addressing security concerns, the building would still need city approval. Chicago's Mayor Daley understands that brand-conscious, sexy skyscrapers look good on postcards and can boost a city's bottom line. The developer says he'd like this to be built by 2009, but he would not put the first shovel into the ground to start the work until about 40 percent of the units are sold. Even here in Chicago, America's first city of architecture, form follows finance. For NPR News, I'm Edward Lifson in Chicago.