Accessibility links
Best Summer Blockbusters Summer at the movies means big-budget, flicks with lots of action, special effects and little to no plot. We kick off our movie series with your choices for the all-time best blockbuster. 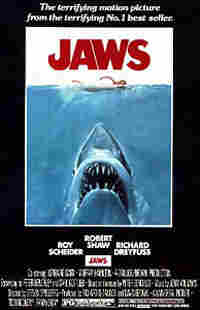 Going to the beach has never been the same: Listeners voted 1975's Jaws the best summer blockbuster of all times. © Tony Seiniger hide caption

Blockbusters are notoriously heavy on action and light on plot and character development. They are huge financial successes because of the large crowds that they attract, so large that the lines for such movies literally go around the block.

We kick off our movie series with your choices for best summer blockbuster. Listeners' top picks were Jaws, Raiders of the Lost Ark, Star Wars: Episode IV and Jurassic Park.

Raiders of the Lost Ark

Night of the Lepus