Accessibility links
The Cackle Sisters, Yodeling Queens Carolyn and Mary Jane DeZurik grew up on a Minnesota farm, but they rose to musical fame in the 1930s. Their special talents included yodeling and imitations of birds and barnyard animals. Their story is told again by writer John Biguenet in the music issue of Oxford American magazine. 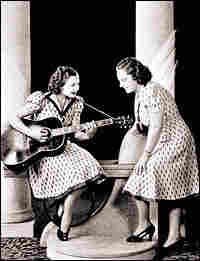 Carolyn and Mary Jane DeZurik, farm girls from Royalton, Minn., perfected and raised the bar for American yodelers, appearing on radio shows, including the Grand Ole Opry, as the Cackle Sisters.

They're among many artists profiled in the upcoming music issue of Oxford American magazine. John Biguenet, who revisited the DeZuriks' unusual career, tells Scott Simon that the Cackle Sisters came along during a period when most yodeling was done by traveling minstrel shows, featuring male singers in blackface doing racist parodies.

Music from the Cackle Sisters

'Go to Sleep My Darling'

'I Left Her Standing There'

The yodeling perfected by the DeZuriks was much more than falsetto. Among their talents were complex imitations of animal sounds. "We listened to the birds and tried to sing with the birds," Carolyn DeZurik recalled many years later.