Listen
'Elevator to the Gallows'

Film critic Kenneth Turan, takes a look at the restoration of the iconic French film, Elevator to the Gallows. Made in 1957, it is a melding of French cinematography and American music that Turan is thrilled to see in theaters. 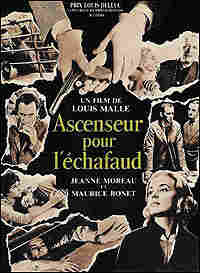 The original poster for Louis Malle's 1957 film has as many images as one of today's trailers. hide caption

Louis Malle is best known to American audiences for English-language films like "Pretty Baby" and "Atlantic City," though his early films were in French. Now Malle's first feature, translated "Elevator to the Gallows," has been restored and is in theaters. Los Angeles Times and MORNING EDITION film critic Kenneth Turan is happy to see it back.

"Elevator to the Gallows" is as elegantly fatalistic as it sounds. Made in 1957 at a turning point in French cinematic history, it is rich with the romantic atmosphere of Paris. The film drew upon several talents, director Louis Malle, star Jeanne Moreau, musician Miles Davis and achieved near-legendary results.

(Soundbite of music from "Elevator to the Gallows")

TURAN: "Elevator" was the debut for the then-24-year-old Malle. His film has the brisk craftsmanship and efficiency of classic French cinema and a breathless hint of the energy of the new wave that was only a few years away. The film made a major star of Moreau, whose work remains completely bewitching. It inspired from Davis an improvised jazz corps that, anchored by his piercing work on the trumpet, has become iconic in its own right.

TURAN: "Elevator's" story of a murder plot gone awry was beautifully shot with available light, a technique considered daring at the time. The film's signature sequence, shot with the camera in a baby carriage, has Moreau's character desperately looking for her lover on the streets of Paris. As the director recalled later, she was lit only by the windows of the Champs Elysees. That had never been done. That first week, there was a rebellion of the technicians at the lab after they had seen the dailies. They went to the producer and said, `You must not let Malle destroy Jeanne Moreau.' They were horrified.

Rather than destroy Moreau, who was already the top stage actress of her generation, "Elevator" was the platform for her further ascent. Malle did such powerful work that "Elevator" was named the best French film of the year. Though Malle's later project made him an international celebrity, this welcome restoration emphasizes that "Elevator to the Gallows" can hold its own with any of them.

MONTAGNE: Kenneth Turan is a film critic for MORNING EDITION and the Los Angeles Times.