For the past few years, producer Jennifer Sharpe has amassed a small collection of what she likes to call "foreign tongue recordings." They're versions of hit songs from the American charts, sung by the original artists, usually in German, Italian or French. 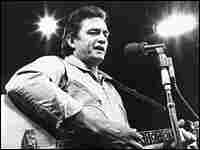 The singers learned the lyrics phonetically, line by line, taught by a language coach. Sharpe says the songs were recorded in a time when English-language songs had a tough time making it in Europe.

Lyrics to "Wer kennt den Weg" ("I Walk the Line") at German.About.com
The Beatles Sing in German
Lyrics to 'Ragazzo Solo, Ragazza Sola' (to the Tune of 'Space Oddity') in Italian