Accessibility links
Q&A: What's Next for the Shuttle? Space historian and Morning Edition commentator Andrew Chaikin answers questions about the challenges facing NASA and the shuttle program, and the future of manned spaceflight.

Q&A: What's Next for the Shuttle?

Q&A: What's Next for the Shuttle? 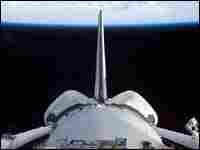 NASA Chief Michael Griffin says he hasn't given up on launching another shuttle this year, though the space agency has grounded its fleet until it can solve the problem of foam insulation coming off the shuttle's external fuel tank. Falling foam doomed Columbia during launch in 2003 by hitting the shuttle's wing. NASA has announced that a similar piece of debris came off Discovery during liftoff this week -- a surprising and disturbing setback for an agency that spent two and half years working to make the shuttles safer.

Space historian and Morning Edition commentator Andrew Chaikin answers questions about the challenges facing NASA and the shuttle program, and the future of manned spaceflight:

How is this incident with falling foam different from what happened with Columbia?

The difference is that this time, NASA has an extraordinary amount of information about the condition of the shuttle. There are new cameras and sensors and even a laser scanner that can pick up tiny defects. NASA been receiving that information from the time Discovery lifted off -- there were actually cameras on the shuttle sending down pictures as it went up, and that's how NASA knows about some of the biggest pieces of foam that came off the fuel tank.

With Columbia, NASA actually rejected opportunities to find out what was going on, while the shuttle was still in space. This time, when NASA officials say the shuttle is safe to come back to Earth, they're saying that based on an enormous amount of new information.

By the way, NASA isn't saying there's no risk to the shuttle. There is always some risk when you're talking about reentry at Mach 25 [Mach 1 is the speed of sound; Mach 25 is nearly 17,500 mph]. But they're saying that any damage to the shuttle from the foam that fell off the external fuel tank seems to be very minimal and not worrisome.

What, if anything, could NASA have done differently?

My impression is that NASA has done just about everything it can do with the resources it has. You can always take more time and spend more money, but the consensus seemed to be that the shuttle team had reached a point where they needed to actually try to fly the mission to get to the next level of understanding.

Having said that, NASA has been very clear all along that this is a test flight. And test flights often turn up problems you didn't know about before, that you have to go back and solve before you can fly again.

The Columbia Accident Investigation Board found that NASA was compromised by lax safety standards. Is there a change in the way the space agency manages and assesses risk since the Columbia accident?

I can only go by the reports I've seen, and what people like retired astronauts and other NASA insiders have said. I think there has been some change for the better, definitely, but the changes need to continue. I think there may still be situations where communication needs to improve, from the people on the front lines, so to speak, and the program managers -- to make sure the managers are really listening. That's going to be a continuing battle.

The space shuttle program was set to retire in 2010. This latest foam incident raises the question: What happens to NASA's manned space program between now and then?

That is really the crucial question. It's up to Mike Griffin, the NASA administrator, to navigate through this and get to the right path. Don't forget that NASA's whole focus has changed, with the president's directive to go back to the moon and on to Mars. It's not the same program it was when the shuttle was created, 30 or more years ago. And NASA is already working on developing new spacecraft and boosters for those missions.

The question is, if you can't fly the shuttle anymore -- and we don't know that's going to be the outcome of all this -- how do you keep your team together, retain the expertise you're going to need for these new missions? That's going to be one of Griffin's big challenges, keeping some kind of momentum going even if the manned space program is not flying for several years.

The ongoing problems with the shuttle fleet raise the bigger question of whether NASA is overextending itself. Would the space agency be more effective if it were focusing on fewer projects?

The problem has been that NASA has been saddled with the decisions of three decades ago, when the shuttle was designed. The whole program has been governed by what the shuttle can and cannot do. The space station program has been very expensive, and it has also sucked up a huge fraction of the NASA budget. [Over the past decade, cost overruns of several billion dollars related to construction of the space station have forced NASA to all but abandon work on other projects.]

So now, NASA is just trying to get out from under the costs of flying the shuttle and building the station, so it can spend its limited dollars and resources on the new exploration missions. Once the shuttle and the station construction are no longer in the picture, I think, that will go a long way toward helping the situation.

Is NASA receiving adequate funding, given its goals and the political demands being placed upon it?

For me the big concern is that NASA must do these new exploration missions without sacrificing science. There's no point in going back to the moon, and to Mars, if we decimate the scientific research that is one of the biggest benefits of the space program. Not just the science that eventually comes out of the manned missions, but the current robotic program of exploration -- the missions to the planets, the telescopes in space, and so on.

Most people don't realize how little NASA really does get -- $16.2 billion, which is about seven-tenths of a percent of the national budget. Still, it manages to do an awful lot with that amount. But considering what we get from the space program -- the stimulus to technology, the excitement it brings to our young people to study math and science and engineering, and the spiritual uplift from going where no one has gone before -- we would do well to make sure we don't underfund NASA.

There is a larger debate over whether the United States needs a manned space program. Critics say that it would be safer and cheaper -- and perhaps more scientifically productive -- to concentrate on robotic missions. What's the argument for keeping the shuttle program going?

You're asking two different questions. Why do we need a manned space program? To me, and I think most Americans, the only reason to take the risks of sending people into space is for the sake of exploration. To gain new understanding, to uplift the human spirit, to take new journeys. Robotic missions are absolutely crucial in exploration, and there should be a thoughtful balance between manned and unmanned missions.

But eventually, you get to the point where you cannot learn what you want to learn with robots, and you have to send people. And only people can come back and tell us what it was like to be there.

As for the shuttle, it has only one purpose now: To keep building the international space station. I would like to see it replaced as soon as possible. It's time to use what we've learned from flying the shuttle for 20 years, build a new generation of spacecraft and start exploring again.

What are NASA's goals behind keeping the manned space program going?

The exciting change now is that the manned space program will be focused on scientific exploration of the solar system. We're going to try to expand humanity's presence beyond Earth. In the short term, that's going to be an incredible adventure, and it's going to tell us things we long to know. We may find out that life exists beyond Earth.

But it's also about making sure that we continue to live, as a species, even if our own planet is threatened by an asteroid impact, or natural disasters here, or our own negligence. If the human race is going to survive, we must become a multi-planet species.

Andrew Chaikin is the author of A Man on the Moon: The Triumphant Story of the Apollo Space Program. 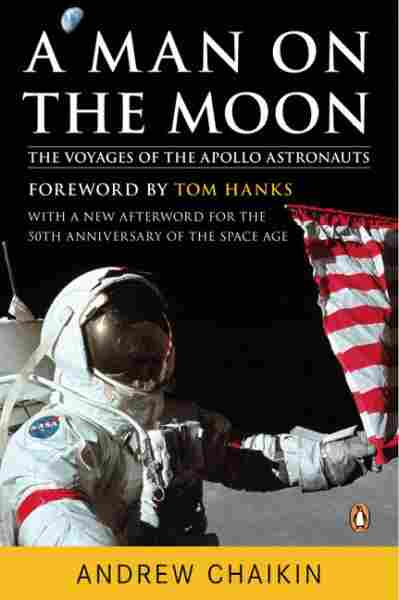 A Man on the Moon

The Voyages of the Apollo Astronauts