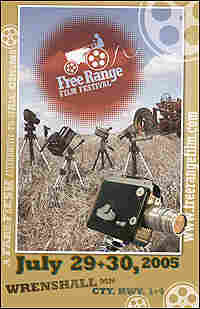 This is the second time the town of Wrenshall, Minn., has hosted a film festival. hide caption

Thanks for being with us.

Ms. ANNIE DUGAN (Free Range Film Festival Coordinator): Thanks for having me on.

SIMON: You folks promote this festival as `a celebration of clean country living.'

SIMON: I--that's not what you see at like Tribeca, for example?

Ms. DUGAN: Well, no, we maybe have a few less limos, more tractors, but we still have fun, yeah.

SIMON: You show the films in a barn?

Ms. DUGAN: We do. It's a big, huge, gorgeous barn, 30-foot high ceiling. And we have three screens this year.

SIMON: So three screens, three films at the same time?

Ms. DUGAN: Yes. Yeah, the screen downstairs next to the cow corrals, and then one in the lean-to.

SIMON: Oh, that's wonderful. But are the cows gone or, I mean, you aren't keeping them up, are you?

SIMON: We want to listen to a clip we have from one of the films. This is the documentary "Switch to Receive." Hansi Johnson is the director. Avalanche strikes a group of friends who are skiing in British Columbia.

(Soundbite of "Switch to Receive")

Ms. HANSI JOHNSON (Director, "Switch to Receive): As we were digging for Elmo(ph) and when I first got Elmo's signal, I couldn't believe how deep he was.

(Soundbite of voices in background)

SIMON: A gripping film. Have you seen it?

Ms. DUGAN: I have. It's very dramatic.

SIMON: I understand, though, at the same time there are a number of films about topics that are--let me just put it this way--a little more domesticated than climbing mountains.

Ms. DUGAN: Yes, definitely. There's one of my favorites, a six-minute movie on toenails called "A Good Strong Roof," about a guy hiking--a hitchhiker who has some issues with his toenails. So--and we also have--we're going to kick off the event with a movie called "American Nizhoni" and it's a documentary about the Miss Navajo beauty pageant. And that'll be really interesting.

SIMON: We have a clip of a film. It's a film about a Swedish washing machine.

Unidentified Man #1: Welcome to the ASKO premier front-loading washer, made in Sweden. As you can see, it is a front-loader. Here's the door here. We're using up the Windfresh right now. And since it doesn't use much water in the washing--you know, about that much soap is perfect. Any questions?

Unidentified Man #2: No, it's pretty straightforward, I think.

Unidentified Man #1: All right. Load it up!

Ms. DUGAN: This is almost as dramatic as the avalanche one, I would say. When he actually--when he does the laundry, wow!

SIMON: Who made this film?

SIMON: May I ask, what's success for you, Ms. Dugan?

Ms. DUGAN: Well, I think for us part of the reason we're all doing this is to build an audience for independent film. We know that there's desire out there, but whenever you go to the theaters around here it's, you know, four screens of "Hitch." So I think success for us would be--to be--start to...

SIMON: Well, you mean "Hitch," the Will Smith's film?

Ms. DUGAN: Nothing against Will Smith...

Ms. DUGAN: ...but, you know. Maybe four screens of it is a little too much. So it would be to build an audience of people interested in the creativity that can happen in unlikely places, and start to build people who like to watch that sort of thing so that there can be more of it happening up in our part of the woods.

Ms. DUGAN: And thank you very much, Scott.