German filmmaker Werner Herzog talks about Grizzly Man, a documentary about actor Timothy Treadwell, who spent 13 years with Alaska's grizzly bears. Treadwell and his girlfriend were killed and eaten in 2003. Herzog uses Treadwell's video to help tell a story of man and nature. 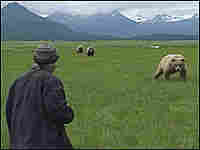 Timothy Treadwell, actor and advocate, got close to Alaska's grizzly bears, but it eventually cost Treadwell and his girlfriend their lives. Jewel Palovak hide caption

Werner Herzog seems to be preoccupied with obsessive personalities, maybe even obsessed by them. In his films, including "Fitzcarraldo" and "Aguirre: The Wrath of God," he's concerned himself with the mixed motivations, inspirations and demons that drive people to achievement or ruin. Now Werner Herzog has found a compelling human story in grizzly bear advocate Timothy Treadwell.

Mr. TIMOTHY TREADWELL (Grizzly Bear Advocate): No one ever frigging knew there are times when my life is on the precipice of death, and that these bears can bite. They can kill. And if I am weak, I go down. I love them with all my heart; I will protect them; I will die for them. But I will not die at their claws and paws. I will fight; I will be strong. I'll be one of them. I will be master.

SIMON: In October of 2003, Mr. Treadwell and his girlfriend, Amie Huguenard, were attacked and eaten by grizzlies in Alaska's lower peninsula. Mr. Herzog has made a documentary of the story of Timothy Treadwell's devotions. It's called "Grizzly Man," and it's being released this summer in various locations across the country. It'll air on the Discovery Channel in the fall. Werner Herzog joins us in our studios.

Very good to have you here.

SIMON: And what drew you to this story?

Mr. HERZOG: I was not really drawn to the story. Sometimes these characters that I love stumble across me, across my life. Erik Nelson, who produces programs for Discovery and National Geographic--he's got this messy table with papers and videos and books on it strewn about it. And I was looking into my pockets and in--everywhere because I had misplaced my reading glasses. And I'm looking down at the table vaguely, but he believes that I spotted something in particular, and shoves over an article on Timothy Treadwell and says, `Read this.' So I read it and immediately hurried back to his office, and I asked, `Who is directing it?' And he said, `I'm kind of directing it.' And there was some sort of hesitation, and with my thick German accent I said, `No, I will direct this movie.' And that was it. We shook hands and I made it. But...

SIMON: Let's--for people who may not be familiar with Timothy Treadwell, he was a marginal Hollywood actor, blond Prince Valiant haircut...

SIMON: ...who became reasonably well-known. And he became a devoted advocate for grizzly bears. He'd spend months every year in the Alaskan peninsula and shoot video and he...

SIMON: ...became a kind of touring celebrity. He'd be on the David Letterman show.

Mr. HERZOG: Yes, I mean, nationwide talk shows. Yeah, he stylized himself as some sort of a self-invented celebrity Prince Valiant. At the same time, he was deeply haunted by demons. He was very, very much addicted by alcohol and drugs, had a near fatal overdose. And now meeting the bears for the first time in his life, it was like an epiphany for him. They had to be redeemed; they had to be saved, but not by an alcoholic. They had to be saved by a sober man. But at the same time, I do believe that the bears saved Timothy Treadwell as much as he tried to save them.

SIMON: We should make plain in this peculiar-sounding phrase, but Timothy Treadwell was dead...

SIMON: ...before you ever saw him on video.

SIMON: Let me ask you about the other video that Timothy Treadwell shot...

SIMON: ...over the years--10, 13 years, I think, in the Alaskan wilderness. Bears frolicking, sometimes fighting, Timothy Treadwell explaining all of this--often charming and insightful--sometimes not.

Mr. HERZOG: Well, I disagree with him over his basic view of nature, and there's an ongoing argument between him and me because I do not see wild nature as anything that harmonious and in balance. I think I--and I'm saying it--I think the common denominator is, rather, chaos, hostility and murder. So of course, I disagree and I have an argument, but it's an argument--I would have it with my brothers. I love them, but I argue with them. And constantly in the footage that he left--about a hundred hours or so--there's over and over and over moments where he steps right in the middle of the bears at arm's length and sings to them and tells them how much he loves them. And I think that is wrong. You should not love the bears; you should respect them. Keep your distance and respect them.

SIMON: Sometimes when you see him addressing the camera in the video, he's charming and engaging...

SIMON: ...and insightful, and other times you wonder who is this nut?

Mr. HERZOG: Of course, he wanted to be a movie star, and he presents himself as a big star, and I gave him the space to be the star, even the best music, the great music by Richard Thompson. And I said to Richard, `Richard, this is the star. Give me the great music.' And so he did that. At the same time, he has moments of solitude and of despair, and then he's raving and ranting about his grandiose existence. And then he literally unravels in front of his own camera and has moments of paranoia. And I think it is the solitude, the solitude of men out there in, let's say, the solitude of the seas. And you will find Joseph Conrad characters, the heart of darkness out there, the solitude. And he unravels and has moments of paranoia. He finds a smiley engraved on a rock, a small smiley...

Mr. HERZOG: A little smiley to greet him. And for him, it is Freddy Krueger creepiness. Somebody is giving him a warning, `We are going to kill you,' and they don't write, `We will kill you,' they do it subtle, engraving a smiley. So it's very, very strange how paranoid he could have become in the long run.

SIMON: Best as you can judge it, is the man you have presented in this film and got to know on his film--was he inexorably drifting towards death?

Mr. HERZOG: Yes. There was something suicidal about him, remotely suicidal. He speaks very often on tape and he speaks in letters and he speaks in his diaries about this, that he somehow wished to die somehow in combat with a bear. The last encounter with a bear that kills him was probably an encounter where the bear sees a rival bear out there, because bears normally--grizzly bears do not attack human beings. It's a very rare occurrence. But grizzly bears would kill each other and even eat each other. They are cannibalistic. So I believe it is an encounter--that lethal encounter moment where a grizzly bear acknowledged there's another bear out there, a rival. Kill him. Eat him.

SIMON: And that was Timothy Treadwell.

Mr. HERZOG: That was--and Amie Huguenard. And it is a deep, deep human tragedy pervading the entire film. It's not only the moment that they die. I think it's a misconception of wild nature. It is everything that is not going right with the so-called Disneyization of wild nature, sentimentalizing wild nature, the New Age concept of wild nature--things going awry. And it's a film that gives you more insight into our own nature than many other films that I've seen in a long time. And it's a deeply tragic movie, as well.

SIMON: Yeah. You're working on a theatrical film now, too?

Mr. HERZOG: Yes, I'm preparing a film hopefully with Christian Bale and Steven Zahn, who was in "Sahara," and Vincent Gallo. I'm speaking of my dream team. But actually, "Grizzly Man" is not standing alone. I'm making three films back to back to back almost at the same time, and I'm already one-and-a-half films beyond "Grizzly Man."

SIMON: Now are you able to have all these simultaneously because there's some emotional or intellectual thread between them?

Mr. HERZOG: Well, it's all projects that are very dear to my heart. And I can't really analyze it easily--I'm not into that--so I'm just plowing on and trying to be the good soldier of cinema, not complaining and just plowing on and being fearless. I follow a vision that has not failed to guide me. And so long as there's breath in me, I'm going to struggle on.

SIMON: And that--can you summarize that vision for us, or do we have to see the film?

Mr. HERZOG: You have to see Treadwell ultimately in the context of 50 films or so that I made. And I do not want to bore you now, but he belongs to the movies I've made as intimately as Kinski belongs in four or five films that I made with him.

SIMON: So the next time they have a Werner Herzog film festival, there's a place for this one?

SIMON: Why get involved in a documentary?

Mr. HERZOG: I do not really make so much clear distinction between documentaries and feature films. There's a blurred line because I stylize documentaries. Sometimes I even invent, I script. Sometimes--not in Timothy Treadwell's case because he was dead, and you do not--you have to respect what's there, and you do not distort it or--so. But sometimes I try to dig into something much deeper than the superficial truth of the so-called cinema verite, which somehow is confused about fact and truth. And I've always looked for something much deeper, an ecstatic truth--the ecstasy of truth--some illumination in my feature films and in my documentaries. So it's always the same quest, and sometimes I keep saying--half-serious, half-joking--`"Fitzcarraldo,"' which is a big epic feature film, `is my best documentary.' I'm pulling a huge ship over a mountain, and the fact itself has so much quality for--well, you can really trust your eyes again. It's not that I used a model or digital tricks or anything like this. It's a real huge ship over a mountain, dragged by about a thousand native Indians from the rain forest. In Treadwell, "Grizzly Man" is probably one of my best feature films. It is a feature film for me. So the distinction is not so clear.

SIMON: Mr. Herzog, thank you so much.

And this is WEEKEND EDITION from NPR News.