Accessibility links
U.S. Plans to Produce Plutonium-238 in Idaho The United States stopped making plutonium-238, one of the most toxic substances known to man, 15 years ago. But now, citing national security needs, the government is preparing to start making it again at a site in the Idaho desert. 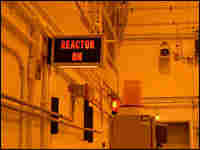 The U.S. government wants to use this four-decade-old reactor at the Idaho National Laboratory to turn neptunium into plutonium-238. Martin Kaste, NPR hide caption 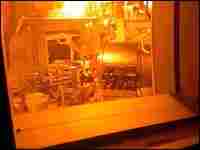 A view of radioactive waste inside a "hot cell" at Idaho National Laboratory. The room is too radioactive for human habitation; operators use mechanical arms to handle items inside. Liquid between the panes of glass in this window blocks radiation. Martin Kaste, NPR hide caption

· Plutonium in its pure form is a radioactive material about twice as dense as lead. Essentially all the plutonium on the planet is man-made, created over the last six decades through fissionable materials. Several plutonium isotopes exist, all of which are radioactive.

· Plutonium-238 has been described as 280 times more radioactive than the isotope plutonium-239, the type used to make atomic bombs.

· According to the Department of Energy, plutonium only poses a health hazard if it is taken into the body. Inhalation poses the highest risk. When inhaled, a significant fraction of plutonium moves from the lungs through the blood to other organs. Cancer resulting from radiation is the main health risk.

Fifteen years ago, the United States stopped making plutonium-238, one of the most toxic substances known to man. It can be fatal to inhale so much as a speck of the radioactive isotope. But now, citing national security needs, the government is preparing to start making it again at a federally owned site in the Idaho desert.

Plutonium-238 is far more radioactive than its cousin, plutonium-239, which is used in bombs. It's so radioactive, it stays hot to the touch for decades. It is useless for commercial nuclear power plants, but ideal to make small, long-lasting batteries for devices such as space probes and espionage equipment.

The U.S. now gets plutonium-238 from old stockpiles and from Russia, which won't sell the isotope for military or espionage applications. Nuclear engineers outside the government believe the plutonium made in Idaho would power spy equipment such as undersea listening devices. A spokesman for the Department of Energy would neither confirm nor deny that these types of applications are driving the government's interest in renewing U.S. plutonium production.

Many residents of Idaho Falls, about 50 miles from the proposed site, welcome plans for a new plutonium plant. But opponents worry about the environmental ramifications. The federal government already spends about half a billion dollars a year on nuclear waste cleanup in Idaho alone.