Accessibility links
A Family That Works Together Stays Together Web designer Caroline Johnson -- disenchanted with the tech industry -- was looking for a new career path. She found it through some people she knows very well: her parents.

Listen
A Family That Works Together Stays Together 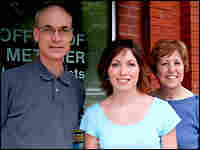 Web designer Caroline Johnson -- disenchanted with the tech industry -- was looking for a new career path. She found it through some people she knows very well: her parents.

Send Us Your Story

John Metzger, Jean Metzger and their daughter Caroline are a month away from opening a Vision Therapy practice together in Lenexa, Kan., a suburb of Kansas City.

John was a long-established optometrist in Hiawatha, Kan. His wife Jean, a former school teacher, became a vision therapist five years ago. She has been working in her husband's practice since then.

The Metzgers say they have seen it turn young people who had trouble concentrating on a page into voracious readers.

Now the three are going to focus on Vision Therapy as a full-time business and nobody seems too worried about money. In fact, John Metzger thinks this new practice will be more lucrative than his old one. Caroline is just happy to be working with people she wants to see every day.

A number of NPR readers and listeners were moved to comment on this story; here are some of their thoughts:

Although your story about the Metzger family was presented as a tale of different generations working together, it also sounded very much like an advertisement for "Vision Therapy" for children with reading problems.

Parents should consult with their primary care doctors before enrolling their children in expensive vision therapy programs of unproven benefit.

Although Ketzel Levine's Morning Edition story about a family collaborating to start a business had heart-warming features, it may mislead people to seek vision training for children with reading problems.

At best, the scientific evidence about the beneficial effects of vision training on learning disabilities is equivocal. At worst, the benefits may be slight, transitory, or non-existent.

I have begun a commentary on this issue at http://www.LDBlog.com/.

Thank you for your "A Family That Works Together Stays Together" story about the Metzger family. Your story was important to me on two levels; one being that I was helped by vision therapy when I was going into seventh grade with a third grade reading level; the other is that I work with my mother for a nonprofit that provides vision therapy to low income children who have learning problems.

I was disappointed to see the comments on the NPR website from medical doctors who disregard vision therapy. Most likely these individuals have never suffered from learning problems and don't understand the struggle. Nor do they understand that there may be other methods than what they've been taught in school. I wish some of these physicians would take more time to learn about vision therapy rather than fight so hard to discredit the value of vision therapy. More people could be helped if we didn't have to fight the Ophthalmologist's ignorance of viable methods to improve children's ability to learn. If it wasn't for vision therapy, I might not have the skills to write this e-mail and strongly disagree with "the good Dr.'s opinion."

I don't doubt for a second the good will of the medical community in their concern for effective therapy for reading and learning problems.

But scientific jousting doesn't win the day for either side. For the moms and dads that I deal with, the only confirmation they need about "does it work" is a changed child. For some of these comments see my website (www.visiontherapykc.com). Jessica, JT and Keegan don't really care if they would be classified as "anecdotal evidence". They really DO care that they are succeeding in school now.