Accessibility links
A Book, an iPod and a Cocktail David Dye, host of the contemporary music program World Cafe from member station WXPN in Philadelphia, shares his picks for summer reading, including a lifelong love of mysteries.

A Book, an iPod and a Cocktail

A Book, an iPod and a Cocktail 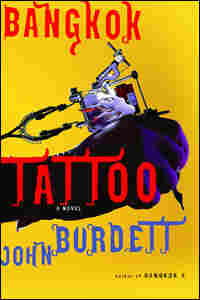 Whether it's the indulgent hours or lighter genres, summer reading is characterized by its reverie. In My Summer Books, NPR hosts and reporters talk about their summer reading. Today, 'World Cafe' host, David Dye.

Describe a moment when you luxuriated in summer reading.

Maybe I was a lazy youth, or perhaps summer vacation stretched out so much longer back then that I had far more free time. Either way, in elementary, junior and senior high school I spent long hours on a wicker chaise in our screened porch, reading book after book. I was a serial reader. We lived a block from the library, so it was easy: The Hardy Boys, Nancy Drew and Enid Blyton's British adventure series. If one volume was great, wouldn't a dozen by the same author be even better?

Even then music inspired my reading. I loved Woody Guthrie -- because Bob Dylan did -- so I devoured everything by John Steinbeck.

What about summer reading now?

Of course, summertime is not as infinite anymore. Our family manages, however, to arrange summer vacations where reading is a priority. This year has been particularly productive.

I have my book bag filled with tomes for our 'World Cafe' summer reading series. Of the 10 books I assigned myself, the most pleasant surprise was Chuck Klosterman's Killing Yourself To Live: 85% of a True Story. The Spin magazine rock critic and cultural observer spent three weeks visiting significant music-related death sites -- from the Rhode Island nightclub where so many fans died to the Iowa field where Buddy Holly's plane crashed -- commenting mostly on his floundering love life while relating everything to the 600 CDs in the back seat of his rental car.

I've made one major discovery unrelated to my 'World Cafe' curriculum: the British crime writer Jake Arnott. His book The Long Firm tells the story of British crime boss Harry Starks through a crackling series of first-person accounts. Harry is a fictional contemporary of the Kray [gangster brothers], so we move through the late 1950s into the swinging '60s and, in Arnott's latest, truecrime, into the '90s. Musically, the books move from bad cabaret to reggae on to two-tone ska and, finally, the rave scene. I love books with soundtracks.

As we have no major travel in the offing (and I'd rather not be a tourist anyway), I've been living abroad vicariously through a number of books. My favorites are by Robert Wilson, whose intricate historical thrillers set in Portugal and Spain during World War II include The Blind Man of Seville and A Small Death in Lisbon. Although nowhere as intricately plotted, his books set in West Africa, including The Big Killing and A Darkening Stain, are far more exotic as he drops you right in the middle of the steaming coastal cities in Benin and Ghana.

Traveling further afield, I can recommend John Burdett's Bangkok 8 and Bangkok Tattoo. In these thrillers Sonchai Jitpleecheep is the Buddhist detective. His mother co-owns a brothel with Sonchai's superior officer. Music and travel in my beach chair, with iPod and gin & tonic within easy reach: a perfect summer moment.